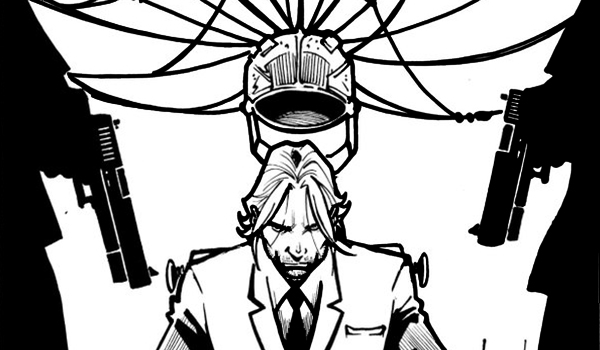 The “body switch” or “one’s mind in another body” plot devices have been used in the arts since Shakespeare’s time. Most often used in comedies and almost explicitly used to teach people lessons about what it’s like to be in someone else’s shoes, these plot devices have rarely been used for something serious. So when Transfer #1, written by Matt Garvey, art by Eder Messiah, came across my desk(top), it was a welcome surprise to see such an old trope be used in a fresh and rich way.

Transfer #1 is the story of Steve, a courier travelling on a flight to deliver a package. However, as we soon learn, the package is not an item in a cardboard box, but the consciousness of mob boss, Tony Angelino, stored inside Steve’s head. In a society that tracks people diligently by their DNA, Steve provides a service to the unsavoury who wish to escape their old bodies and start anew as someone else. However, as Steve soon finds out, working a job for Tony Angelino and his brother Dino may be even more dangerous than originally thought.

Garvey does an excellent job creating the world that Steve has to go through day in and day out. While not leaving much room for deep characterization, the story is still set up expertly enough that we know we would explore far deeper into these characters in future issues. This issue was more about showing off a good idea done well, and leaving the door open for multitudes of possibility.

Messiah’s art is rich and detailed, yet varied across the issue. Some frames have bold, almost pop artwork with loud, bright colours, while other times the art is stripped to a minimalist level like showcasing a character’s eyes against all black background. The artwork comes together in a very cinematic way, with many frames being devoid of dialogue bubbles and letting the artwork speak for itself. It’s all tied together by Garvey’s colouring of the issue wherein he uses every eye-popping trick in the book to make every image pop from the page.

Transfer #1 is a fun start that starts the path towards numerous possibilities. It is a such a simple idea of having someone else in your head, or being in someone else’s, that has mostly been used for laughs in art, but Garvey has widened the scope of this idea to be able to include so much more. Without spoiling too much, I would say that Transfer has the workings of something big like Orphan Black or Quantum Leap. By having Steven transfer his own consciousness from interesting person to interesting person and also smuggling an eclectic group of characters in his own head, Transfer has fodder for hundreds of issues to come.

What did you think of Tranfer #1? For more of Matt Garvey’s work, click here. Sound off in the comments or send us your thoughts on Twitter!