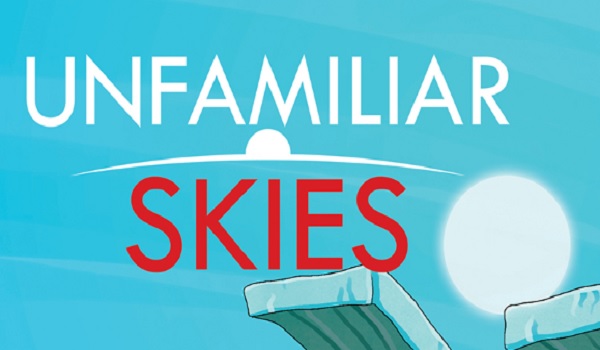 Welcome back all you space cadets (and real astronauts) out there! You may remember that not too long ago we did a review of the five page preview issue of Sam Webster‘s Unfamiliar Skies, yes? Well now that the project has been funded thanks to all you generous, galactic donators out there, we are very pleased to bring to you our relatively spoiler-free review of the very first, full length issue! Let us begin.

For those of you that haven’t had the chance to check out our review of the five page preview issue, Unfamiliar Skies is about nineteen year old Claris Muston, who was born on a space ship designed to carry several generations of human beings into the far reaches of space in search of habitable planets. While this may sound “hip” and “cool” to some, Claris isn’t too thrilled with the fact that she had no say in the matter, so she takes it upon herself to leave the spacefaring colony and travel the unknown depths of the Universe all on her own.

Of course Claris’ mom finds out pretty much right away and they engage in your typical teenager vs. parent banter, although I can’t really say I blame Claris for her actions, as short sighted as they may seem; having your life planned out for you from the start isn’t exactly ideal. The problem here is that the dangers of deep space rear their ugly, cosmic heads almost immediately, causing Claris to crash-land on a strange planet. This is pretty much where the preview left us, with Claris meeting the mysterious alien, Kaupmadr. 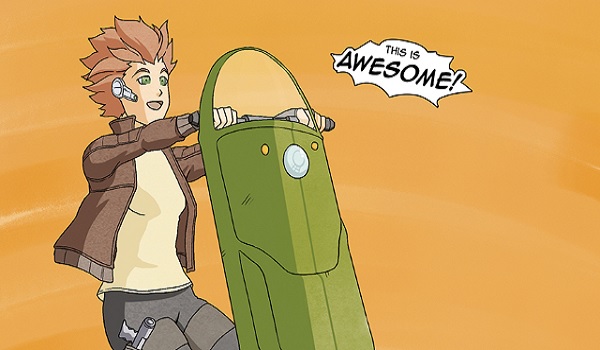 Whenever I see any sort of fiction that is set in outer space, I cannot help but be reminded of Star Wars, as it is so deeply ingrained into my memory banks. Because of this, I immediately wondered whether Kaupmadr would join Claris on her journey into the unknown and the proverbial and ever so cliche “rag-tag” group would be formed. What Webster has done here is something unexpected, which was refreshing. Kaupmadr comes off as slimy right away, but agrees to help Claris fix her ship under the stipulation that she locate and bring him a mysterious golden orb.

We all know that removing any sort of golden artifact from its resting place is incredibly dangerous (see Raiders of the Lost Ark), and so Claris is soon pursued by a bunch of aliens who are a bit upset with her and her thieving ways. We get a nice little chase scene on the surface of the planet, where Webster’s artwork really shines. Did I mention that Webster handles the entirety of the work on Unfamiliar Skies? That’s right gang, Sam Webster flies solo on this book, and he does a fantastic job at it.

I always say one of my favorite things about space fiction is the way in which various artists depict alien life and scenery, and Webster shows us some interesting ideas in this first issue of Unfamiliar Skies. From the gigantic “void wyrm” that attacks Claris in the opening pages, to Kaupmadr and the cast of alien characters we meet along the way, the character designs are interesting and very well drawn and colored. The dark and cavernous alien domicile where Claris obtains the golden orb is in stark contrast to the warm, bright landscape of the planet’s surface, which provides an excellent aesthetic dynamic that lasts throughout the entire issue.

Webster’s artwork has a sight anime-esque feel to it, especially when concerning Claris, which while paired with the color palette Webster has chosen for Unfamiliar Skies works perfectly. I really cannot say enough good things about the artwork in this book; it really looks spectacular.

The story is quite strong as well, and contains a fair balance of action and intrigue. There’s the aforementioned chase scene, as well as a tense moment where both Claris and Kaupmadr are confronted by the angry alien posse at Kaupmadr’s little mechanic…shop…place…ehem. Kaupmadr himself is a bit of a double crossing weasel it seems, and has his own plans for Claris and the golden orb, which prompts Claris to once again hop in her little space ship and get the heck outta Dodge (space Dodge, that is). 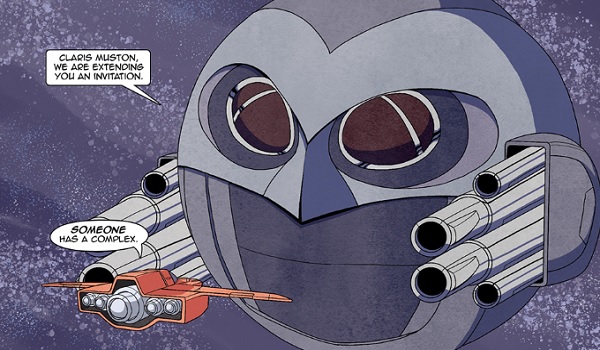 This first issue leaves with a cliffhanger involving yet another mysterious figure named Istrumas, who also appears to be quite interested in that golden orb I keep talking about. What’s more is that Istrumas seems to know certain things about Claris and her past, leaving the door wide open for an ongoing story arc. My initial presumptions (good presumptions, mind you) about this book have pretty much been completely taken apart, and I was surprised at how the story turned out in this first issue. Webster’s story certainly delivered in the surprises department, and left me wanting to know what is in store for Claris in the next issue. Here’s hoping we won’t have to wait too long!

I can absolutely recommend Unfamiliar Skies to just about any comic fan out there. Like space fiction? Get it. Enjoy creator-owned, independent comics? Go ahead, get it. The story and artwork are excellent, and it’s unique enough for all you fringe readers out there. For more Unfamiliar Skies action visit Webster’s official website where you can pick up your very own copy of issue 1! Then, go ahead and follow Webster on Facebook and Twitter!

Will you be grabbing your copy of Unfamiliar Skies? If you’ve read it already, what did you think? Let us know in the comments section and on our Twitter page!