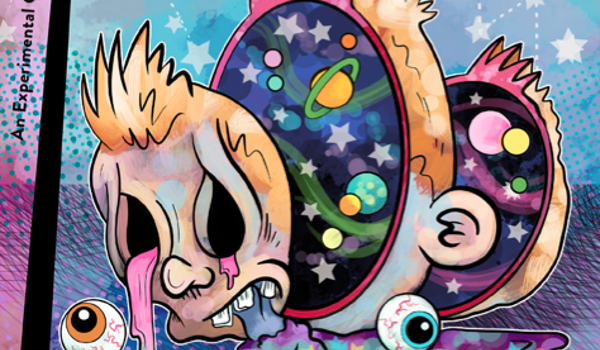 With a Kickstarter campaign in full swing for the print anthology of Sliced Quarterly, AP2HYC caught up with the mind-bending “slice-o-life” anthology’s creator, editor in chief Ken Reynolds, to discuss life, art and all things Sliced.

A Place To Hang Your Cape: You’ve worked as an editor and letterer for various ‘genre’ publications, including sci-fi/fantasy anthology 100% Biodegradable and your wonderful occult mystery comic Cognition. What was it that made you decide to start a comic as stylistically different as Sliced Quarterly? Is there a bittersweet Sliced style backstory to its inception?

Ken Reynolds: I guess I wanted to make something that I wasn’t able to get hold of. I’ve always been of the mind that you should only make books that you wish to read yourself, and Sliced is a prime example of that. The unsettling part of this process was discovering if I was the only one that wanted to read a book like this! Happily, just over a year ago now, I found a small group of creators that I had worked with directly and indirectly, that decided to enable my whimsy.

The whole book is set up to allow contributors room to be creative. I want ideas they would usually dismiss because it would never get picked up by the ‘usual’ publishers. I always imagine Sliced submissions to be the fun little side projects people make between their ‘proper’ paid jobs. It’s a release. To allow for this way of working I take a very relaxed attitude to my editorial duties. I don’t impose deadlines. People work at their own pace, but they have an idea of when I’ll be looking to pull an issue together, so it’s down to them. I then choose from the finished work available each three months to build an issue. I put trust in the creators and it has served us well. I’m as surprised as anyone that we have four full issues with this approach, but it’s the only way to work it.

I believe I’m creating an opportunity for creators to work on something they don’t usually get a chance to do, but I can’t offer page rates at the moment, so I have no right to make demands. It’s very much a give and take relationship, and I hope we strike a balance. Creators give me their work, and I try my best to get it in front of as many readers as possible.

AP2HYC: Like the NHS, you’ve decided to keep Sliced, “free at the point of need”, by allowing readers to download each issue online. Noble endeavour or fool’s errand? How does the annual compendium fit into the picture?

Reynolds: I guess I’ll have to answer this question at the end of our Kickstarter campaign! As I mentioned before, my job is to get the book read as widely as possible. I always intended to keep the first issue free to read, and use that as the ‘mission statement’. It encapsulates what the book is about and what we’re all trying to do. By the time we had the second issue ready, I began to feel uneasy about charging a fee. It seemed like I was putting a barrier up between the potential readership and the contributors.

It all sounds a bit wishy-washy but I take my responsibilities concerning this book very seriously. People take a lot of time and effort in crafting their work. They are handing it over to me to look after in the hope that I can broadcast it wider. To lessen the chances of this happening for what would be very little monetary gain ended up being an easy choice. So I kept it all free, with the idea that I would collect everything into a trade paperback. Mass printing is always expensive, so with my experience running my Cognition Kickstarters, crowdfunding for this seemed like the ideal choice.

It’s my hope that by offering the issues for free, we might have built enough of a readership that wish to have a printed copy. Comics are quite unique in this way at the moment. We still have a fondness for paper and ink in this medium, while prose, newspapers and magazines are becoming increasingly digitised.

But it still remains to be seen if this is the case. I’m hoping that this might be a viable yearly publishing cycle, and a good way to use the Kickstarter platform to help grow an audience. If it doesn’t work? I’ll be back to the drawing board to figure out a different way to do it. No matter what, the digital releases aren’t going anywhere and will continue. It will simply mean I will have to work harder to connect with our audience. I’m determined to place a physical book into the hands of our contributors as payment for the faith they have shown for me by buying into a strange, little idea I had in 2015.

AP2HYC: The comic has been highly experimental from the outset. What particular stylistic/narrative tropes make for a good Sliced strip?

Reynolds: Twitter is an amazing place to develop a tagline. The format forces you to distill a complex idea down into a pithy line, and my promotion of Sliced so far has resulted in this: “Simple stories told in extraordinary ways”. Sliced is about the human experience, and trying to make sense of the world through stories, more specifically comics. A good Sliced submission will use the unique tools within the comic book medium to express the idea. It can be funny, touching, unsettling, scary…pick any range of human emotion and experience, there is a story to be told.

My other popular promotional line is: “HOW the story is told is as important as WHAT it’s about”. And part of that is making sure that that the comic book form is front and centre. I believe most of the submissions in Sliced can only work effectively as comics. The stories rely on this form to be told, and they are more powerful, emotive and engaging for it.

AP2HYC: From issue #3 Sliced has become increasingly topical; tackling subjects such as economic migration, social media and, of course, Brexit. Can we expect more social commentary in future issues?

Reynolds: Honestly, I don’t really plan for these things to happen. It’s not like I put out a call for political or current event stories, these were simply the subjects my contributors put my way at the time. All of the submissions are put into a big barrel and I distil the issue from it. I don’t shape it as much as guide what is already there.

In a sense it’s worked as a mirror to what the creatives have been feeling, especially when they are reacting to current events and when they are choosing to share very personal, real stories.

By focusing on story, I think we are making the book both of its time and timeless. Some issues will be a snapshot of what is going on and in, say, five years time they will work just as well as narratives and exist in the context of whatever happens in the world next. But I don’t have an explicit agenda. Of course, I have my own preferences and, obviously as I get the final say on what goes in, it affects the content, but in general the submissions that I get jive with my general view of the world, or how I believe the world should be. Having said that, I’m open to all viewpoints as long as they aren’t harmful or overtly offensive. Keeping reasoned debate and discussion alive is vital. There’s no point existing in an echo chamber of your own opinions. That’s when the world outside changes without you noticing.

AP2HYC: My favourite Sliced strip is probably S.K. Moore’s surrealist “Aufklarung” (there’s a guy with a newspaper head in it…what’s not to love). Do you have a favourite/favourites and why?

AP2HYC: I only have one child, so I never have to deal with this sort of question usually! To pick a favourite is a very mean thing to do. I love everything included in the issues, otherwise they wouldn’t be there, and if I were to choose any highlights, it would be for very different reasons from the readers. My favourite are the pieces with varied and interesting creative processes – the things that the reader never gets to see. Though interestingly with Sliced, we manage to keep a lot of the process on display.

For example, there are two stories from the same writer in issues #1 and #2. The very talented Chris Sides scripted “The Body Bag” and “Selfie Obsessed”. Both scripts I initially approved are vastly different from what ended up being published. This is down to the collaborative process on both occasions. The artists Denis Vermesse and Maximilian Meier were very generous with what we did to their work. Nobody was precious, and it was a true collaboration all the way through. Everyone brought something new to the mix and the piece was improved with each new idea and twist. I was pleased to bring my own skills to bear on each one too.

But for pure narrative, I adore S.J. McCune‘s piece in issue #4 “Limits”, which blew me away the first time I read it. It’s so complex ad startling. The abstract piece “Implosion Flower” by Gareth A. Hopkins and Erik Blagsvedt is quite unique and unlike any other comic I’ve seen, so that one sticks out…I could carry on and mention them all. We’ve had a few pieces from Kathryn Briggs that are really powerful, they stand out because the comics convey such intense emotions. Basically, I only put things in the book I feel are notable, so if you’re in the book it’s a favourite of mine (ahhh diplomacy!).

AP2HYC: How do you see Sliced developing? what kind of comic will we have, say, five years from now?

Reynolds: This question is quite exciting because my honest answer is…I have no idea. And that’s the joy of the thing.

Not knowing is a fork in the road for most creators, it’s either scary of unsettling, or it’s liberating. Either path can create exceptional work. The content of this book is down to the contributors. As long as the creators keep sending me interesting comics, I’ll be putting a book out. Ultimately the content is down to them, I just channel it into a package.

I hope to look back at this first collection in five years and feel the same, if not more pride than I do now, because making comics is hard, and to have completed a book is an achievement in itself. I just want to share all of our hard work.

Have you back Sliced Quarterly on Kickstarter yet? You can do so here! Let us know in the comments section below or send us a Tweet!