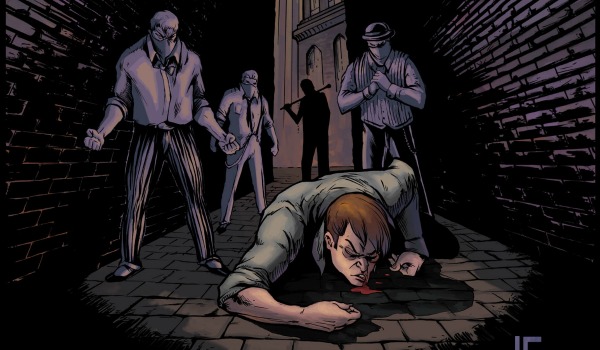 We here at A Place To Hang Your Cape are most fortunate to be rubbing shoulders with many of the U.K.’s hottest indie comic talents. One of those such talents is the horrifically awesome TPub Comics, who specialise in sequential story-telling designed to make your skin crawl. Their never-ending horror anthology Twisted Dark remains a high-point of their catalogue, whilst other titles such as Tortured Life and Tabatha find a balance between the spectacle of horror with finely-tuned stories and characters.

Now however, the publishing house are gearing up for something a little different. Their latest project, Theatrics, is a lengthily graphic novel that’s being released page by page online, with a recently launched Kickstarter to fund a physical version. It’s a tale of loss and revenge, delivered with a deliciously macabre smirk. Given TPub’s perfected skill of keeping the reader hooked whilst at the same time, underscoring that hook with an unnerving sense of the twisted about to jump out at you, releasing Theatrics page by page feels less like a method of enticing the reader, and more like a method of keeping the reader’s nerves on edge.

Theatrics tells the unfortunate tale of Rudi, the greatest actor of 1920s Broadway… or rather, he thinks himself as the greatest actor of 1920s Broadway. In the space of the first few pages, writer Neil Gibson and artist flawlessly Leonardo Gonzalez capture Rudi’s rock star lifestyle. Rudi is living the dream, until he’s beaten to a bloody pulp after a night of raucous partying. His pretty boy good looks shattered from the almighty fisticuffs, Rudi’s life soon crumbles before him. He looses starring role after starring role and his lover abandons him, but in a suitably twisted turn of fate, it’s the very violent nature of Rudi that can perhaps save his life. His desire to become the greatest actor in the world is refuelled when his stage transforms from being on Broadway to being in the boxing ring. With the world back in the palm of his hand, how far might Rudi go to become the world’s greatest actor?

Because of Theatrics‘s serialised format, Rudi’s descent into a life of violence earns a dramatic thrust each each page is released, bolstered by many of those pages arming themselves with short, sharp bursts of tension as we witness Rudi’s life fall apart and the choices he makes with what’s left. Whether he’s shutting himself away from those who love him, or salvaging what we can of his past existence of fame and glory, there’s very little melodrama in how each page is meticulously presented as something of an episode from a television series. The unfolding plot also works in great tandem with the artwork, which is full of dark yet rich, vibrant colours and inventive yet cohesive panelling. Caricature after caricature displays how Rudi’s growing darkness is inevitable.

What makes Theatrics a winner for me however is the characters. Sure, Rudi is an egotistical thug at the beginning of the story, and soon evolves, Frankenstein-like into a literal thug as the story progresses, but he’s surrounded himself by those who provoke him into his horrifically grotesque persona. His lover returns to his arms after time away in Paris only to let him know that she’ll be abandoning him for good, whilst nephew Sam, who shows himself to be one of the few people who’ll stick by his mutated uncle, is the one who’s desperately keen to exploit his disfigured uncle into throwing him in the deep end in the world of boxing. Sure, Rudi goes along with the idea, but evidence such as this shows that Rudi is very much the victim of this tragic tale.

As of this review being written, Theatrics is currently at Act 5 with 11 pages released, but for the purposes of this review, I’ve read no further than Act 4. I don’t want to spoil myself by allowing too many cliffhangers to plague my mind! I’ll be returning to the comic once new pages are released throughout Monday to Friday every week, and I await them with great expectation. There’s ten chapters outlined for this graphic novel, and given that we’re barely halfway through, I can’t wait to see what Neil and Leonardo have instore for Rudi.

Theatrics is a delightfully savage comic book that is bursting with an intriguing premise, entertaining characters, a riveting story and darkly sublime artwork. Aside from being yet another knock-out addition to TPub’s output, it’s an eerily calamitous tale of what life can throw at us after it’s seemingly ruined forever.

You can back Theatrics on Kickstarter here, but for now you can lose yourself in the online version here, and find out more about TPub here!