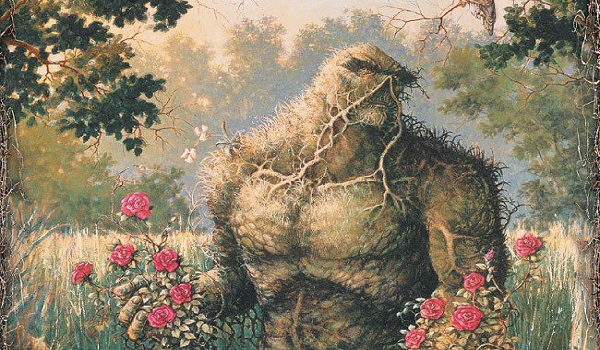 Throughout the history of comics, the horror genre has been a substantial and consistent one, with rises to mainstream popularity no more evident than with The Walking Dead. Going back to the E.C. days, horror has always been a welcomed alternative to superheroes and has endured successfully even in a niche crowd. But the truly exceptional horror title would have to be Saga of the Swamp Thing written by a young Alan Moore. Much like how Frank Miller saved Daredevil from the brink of cancellation, Moore took the helm of Swamp Thing and revolutionised comics forever.

When Moore was brought on to the title, he was given the freedom to do whatever he pleased. He started from scratch and redid the origin his own way. Instead of protagonist Alec Holland turning into an monster in an Incredible Hulk manner, Moore cleverly wrote a story where Alec Holland dies and is reborn as Swamp Thing. The inception of Swamp Thing came with the consciousness of Holland though no tangible feature of him. It was a creature which had the memories of being a human without the emotional complexity. This gave us a much more intriguing character to dissect (quite literally sometimes) who could understand humanity through a foreign lens though maintained the purity and innocence of a child. His strength and endurance exceeded that of an ordinary man but he never sought out confrontation as we often see in other superhero comics. No, he was content living in the green, being one with the natural earth.

The art, by talents such as Shawn McManus, understood Moore’s strangely beautiful vision. The vivid serenity captured in the organic world Swamp Thing embodied was enhanced by some trippy, psychedelic coloring. As setting plays a crucial role in most horror stories, whether it be a foggy moor or creaking house, the setting in Swamp Thing was, unsurprisingly, a swamp. It’s nature, and its presentation held no boundaries in depicting its sheer murkiness. It’s gross and ugly and yet, there’s something uniquely attractive about it once you journeyed through it. Same could be said for our titular character. Everything about his appearance was monstrous, from his glowing red eyes to the roots sticking out of him, but this character was one of peace and tranquility.

The gorgeously surreal environment that Swamp Thing inhabited was juxtaposed by repulsive imagery, most notably in his adversary Anton Arcane. A scientist who also suffered from experimentation gone wrong, Arcane’s vile attributes came in the form of decaying skin. While Swamp Thing’s physical appearance showed a being who represented the life around him, Arcane’s deformity showed the remnants of a person whose body was slowly rotting away.

As wonderfully realised as the art in Saga of the Swamp Thing was, it’s Moore’s writing which truly elevated the comic to becoming classic. Perhaps the greatest single issue of the run is “Rite of Spring” where we saw how Swamp Thing and partner Abby were able to make love. Yes, it’s sounds ridiculous with zero context, but the limitless imagination formed in the marriage of words and art showcased the elegant, cinematic bliss of the story. As Abby is able to see and experience the world the way Swamp Thing does, we’re given a rush of colour and unconventional compositions, accentuated with lines like, “Together we bathe in raw life: Honey rolls across our tongue. The fragrance of decay, mesmeric and overwhelming, excites our nostrils. We savour both equally…for life is not all that we comprehend. We are the world.” It’s tender and honest, speaking volumes in its eloquent language. It brought a new maturity to comics, something fresh and new that would radically change the medium. Moore’s sophistication was unmatched then and is unmatched now; an extraordinary writer not simply by comic standards but by any standard.

What do you think of Swamp Thing? Let us know in the comments or on Twitter!