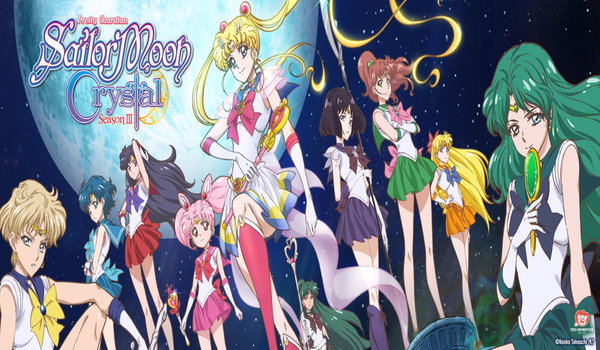 The third season of Sailor Moon Crystal, the modern day adaptation of the beloved magical girl manga, was arduous to wait for. I have only been a fan of the Sailor Guardians for about a year or so now, and my review of the first two seasons wasn’t exactly supportive of the anime reboot, even though it was my first taste of Sailor Moon.

I found the characterization underplayed in favour of rushing through the plot, the character designs weird, and the animation soured by 3D cel animation used in the transformation sequences. It was obvious the production was rushed, and waiting two weeks for a new episode was a nightmare. However, the third season is a vast improvement, made with more attention to detail, and at least trying to conceive that some care went into it. However, there still are some problems.

Please note that there are major spoilers for the whole series below.

Right away, the season’s animation style, tone, and characterization shift to something closer to the manga and 90s anime: The writers remembered everyone beyond our heroine Usagi Tsukino had personalities, the comedy came from the protagonists, and to add a more personal connection to the drama. The designs aren’t so stretched, the characters having rather long arms and identical faces in the first two seasons, and there was little attention on the other protagonists. I suppose with a large cast, it can be a difficult balancing act, but for the first half of the season, it works.

And the transformation sequences, boy are they beautiful. No longer stiff and lifeless, the transformations of the girls are spectacular. Heck, they devote about five minutes of the first episode just to show off how lovely the animation looks. They are little long, repeating it again in the second episode, but after that, it is smooth sailing. The music reuses mostly themes from the first season, but introduces a new opening, which is a little too weak for the epicness that is meant to be Sailor Moon. The season also has two endings, which are both quite catchy.

Anyway, to the story. This season focuses on the “Death Busters” arc, introducing the rest of the Sailor Guardians (Uranus, Neptune, Saturn, and reintroducing Pluto), some new powers of the gang, and another but somewhat more personal end of the world plot for Sailor Moon and friends. In this arc, the Sailor Guardians become suspicious of a newly opened university that seems to be the source of the new monsters wreaking havoc in town. Usagi and her friends Ami (Mercury), Rei (Mars), Makoto (Jupiter), Minako (Venus), boyfriend Mamoru, and their daughter-from-the-future Chibiusa, have a lot on their plate; namely with the arrival of two new Sailor Guardians: Haruka and Michiru, aka, Sailor Uranus and Sailor Neptune, who take it upon themselves to defeat the badguys, called the Death Busters, let by another generic smoke monster called Master Pharaoh 90.

Chibiusa, being a whiny brat before, is now a mature little girl, often teasing Usagi, and has gained a much more likeable, sweet personality. She befriends an ill girl named Hotaru Tomoe, the daughter of a mad scientist who just so happens to be working for the Death Busters and making their evil monsters. However, there is more to Hotaru than meets the eye. The story briefly tries to incorporate a potential love triangle between Usagi, Mamoru, Haruka, and Michiru but it is quickly resolved. Unfortunately, the story does deliberately hold off the obvious revelations about Uranus and Neptune’s identities to Usagi and co. Usagi immediately suspects who they are as soon as a connection is made, and while actually pushing for an answer, the reveal is delayed for some reason.

Sailor Pluto, who died at the end of the second season, was resurrected in the present day to help Uranus and Neptune take down the Death Busters. However, there is a more drastic reason behind their determination to act alone. If they do not act fast enough, than the ninth guardian, Sailor Saturn, will awaken and destroy the world, as she, shockingly to me, did to the Moon Kingdom. As you might have guessed, Saturn is actually Hotaru, who has had quite the tragic past and is actually a pawn of the Death Busters to bring Master Pharaoh 90 to Earth and destroy it because reasons.

The villains are again as dull as dishwater, and I am growing very tired of Sailor Moon relying on evil, generic space monsters who have no personality beyond obsessing over power and destroying the Silver Crystal. Just about every other adaptation has made me care for the villains, so why can’t Crystal?

There is also a strange, deliberate focus on the fact that Haruka and Michiru are a lesbian couple. Their relationship was one of the first featured in a widespread kid’s show, infamously “edited” out of the English dub of the 90s anime, claiming their close affection for one another as being cousins, which just made it even more obvious. I suppose nowadays where LGBTQ relationships are both now commonplace and accepted, the series wanted to flaunt it. But, there is also the use of Haruka keeping her gender a disguise. In the 90s anime, it was played for laughs since Haruka is very masculine, but they keep it going, confusing Usagi in the process when Haruka starts kissing her as both sexes.

Despite repeating some flaws from its first two seasons, Sailor Moon Crystal has improved vastly in most departments. There is a hint at the next arc to come, so we will be seeing a fourth season. I just hope they make it a full season and give enough time to focus a little more on the characters.

Have you watched Sailor Moon Crystal? What were your thoughts on it? Leave a comment below or on our Twitter!