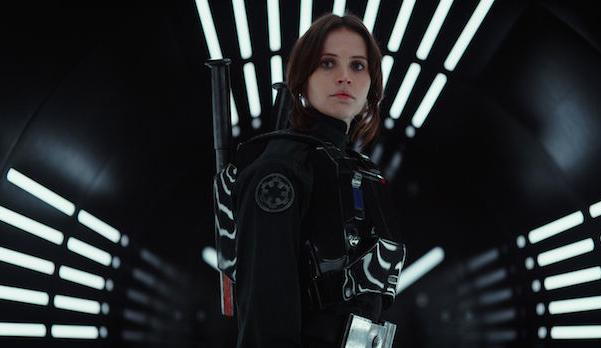 Congratulations! You’ve made it past the title and have decided to actually read my full review of Rogue One! If I’m being completely honest, I don’t expect a lot of people to get this far. I’m sure numerous users will see the title and think, “Psht, why do people always have to complain? This review is crap! Rogue One is the best movie ever! You suck!” Then they’ll probably go on and get into a heated Internet debate about how they think Andrew Garfield was the best Spider-Man ever.

Ever since I saw the first trailer for the movie, I wasn’t incredibly impressed. I thought it looked very average. The story seemed cool, and the cast list caught my interest, but there was something very off about it. The trailer failed to make me go “Whoa!” like the trailer for The Force Awakens did. I should’ve known right then and there that it was a bad sign, but I like to be optimistic about movies (except when all the signs point to a travesty [Fantastic Four, anybody?]). Rogue One‘s trailer had its moments, but overall, I didn’t expect to be blown away. Nevertheless, I bought my ticket for opening night and I made sure I kept my eyes off any reviews and comment sections to avoid seeing any potential spoilers. After I had The Force Awakens spoiled for me, I wasn’t taking any chances.

Just as a forewarning – if you haven’t seen the movie yet, there will be some massive spoilers ahead. You’ve been warned.

First off, Rogue One isn’t a sequel to The Force Awakens, which many people seemed to fail to realize. It takes place between the events of Revenge of the Sith and A New Hope. So don’t get your undies in a bunch because we have “another Death Star”. This is THE Death Star from the original trilogy, and we sure do learn a lot about it in these two hours.

The movie begins with research scientist Galen Erso (Mads Mikkelsen) being taken by Imperial troops to work on the Death Star, the planet-destroying super-weapon of the Empire. Galen’s wife is killed by the Imperial soldiers, and his young daughter, Jyn, hides out in a bunker, only to be rescued and mentored by family friend and Clone Wars veteran Saw Gerrera (Forest Whitaker).

The movie then flashes forward 15 years later, where Jyn (Felicity Jones) has turned into an outlaw, and Saw has become the leader of an extremist Rebel cell known as the Partisans, based out of the distant moon Jedha. An Imperial pilot by the name of Bodhi (Riz Ahmed) defects from the Empire and brings a hologram to Saw, claiming that it can help the Rebels destroy the Death Star.

Meanwhile, Rebel officer Cassian (Diego Luna) and his sassy droid, K-2SO (voiced by Alan Tudyk), rescue Jyn and take her to Jedha to see Saw (I just laughed a bit when I said that sentence aloud). Saw and the Partisans are engaged in an aggressive assault on Empire forces as they extract Kyber crystals from the moon to power the Death Star. Fun fact: Kyber crystals are the same sources of power for lightsabers. So there seems to be a connection between the two (this may have been expanded upon somewhere in the Extended Universe, but seeing as it’s been rendered as non-canon, I’m not sure where they’re going with this). As Cassian and Jyn are congregating with Saw, they also meet mercenary Baze (Jiang Wen) and blind warrior Chirrut (Donnie Yen). And there we have our main cast!

On paper, the group of heroes looks incredible. I love the concept of ragtag outlaws with various skills and personalities coming together to complete a mission (Suicide Squad, Guardians of the Galaxy, The Dirty Dozen, etc.). But we barely get any real development out of Rogue One‘s cast, which made it hard for me to connect with any of them. Everyone felt so bland and one-dimensional. The only characters I actually felt a connection with were Chirrut and K-2SO (who doesn’t love a droid with an attitude?). I couldn’t care less about everyone else in the movie. Like, I know they were all going to die eventually, but it still helps to give them some development so that their deaths make an actual impact.

The first hour or so of the movie felt very slow. At this point of my review, people will say “Ugh, there can’t be action every five minutes! You need development!” And then I go, “I don’t want action; but I WANT SOMETHING TO ACTUALLY HAPPEN!” I can sit through hour-long episodes of The Walking Dead where one or two walkers are actually killed, and I won’t complain. But that’s because there are things still going on to move the plot forward. It’s an insult to the audience when a movie or show is padding run time with pure filler when it could be doing much more to progress the story. It’s like that episode of Family Guy where Peter falls and hurts his knee and keeps going “Ahh!” over and over. It’s not funny or entertaining. It’s annoying. That’s almost what it felt like watching the first hour and fifteen minutes of Rogue One.

I will say this: I loved the explanation from Galen’s hologram regarding the Death Star’s weakness. Remember how everyone made a huge deal about how a giant space station could be neutered by a shot to a small reactor core? After almost 40 years, we finally have an answer as to who approved such a major design flaw. According to Galen’s hologram, he intentionally designed the Death Star’s small but exploitable weakness so that the Rebels could have a chance to destroy it. It’s so simple yet so ingenious. I could’ve sworn a bunch of people in the theater were like “Ohhhhhhhhhh” when they heard this. It’s odd, but this may have been one of my favorite parts of the movie.

My other favorite parts include Donnie Yen just being a pure badass. He may be blind, but he is so in-tune with the Force that he has reflexes and abilities that surpass anyone with 20/20 vision. I’m a bit wary of spin-offs, but I’d totally welcome a Chirrut solo movie at some point, even if it’s just a small mini-film on YouTube.

Rogue One picks up towards the last half-hour as Jyn and her team raid an Imperial base on Scarif to find the Death Star schematics. Cassian and Jyn infiltrate the base while everyone else sets off a string of explosions to draw attention. We see lots of firepower being exchanged, and we also watch as several of our heroes are killed off. Again, it was hard for me to feel anything as I watched them die. Even when Chirrut was killed, I just shrugged and went, “Well, that blows.” Nothing really phased me about these deaths. I was sadder when Yoda died in Return of the Jedi.

Then the Death Star blows up the Imperial base, eradicating the rest of the main cast, and once again, I just didn’t care. They tried to add a sweet moment as Cassian and Jyn are hanging out on the beach, watching the explosion draw nearer. Still nothing. It just seemed like a lazy way to tie up the loose ends so that there aren’t any questions as to why the Rogue One cast isn’t in any of the following movies.

The very ending of the movie is what made me go from “Eh, I should’ve waited for Redbox” to “Wow, I’m glad I saw this in theaters ASAP.” Early on, Darth Vader was said to have a role in this film (with James Earl Jones reprising his role as the best villain voice of all time). I assumed he’d just have a small cameo. After we watch him briefly force-choke someone at the halfway point of the movie, I thought that would be the end of it. Nope. His time is far from over.

Before the Death Star could destroy the base on Scarif, Jyn and co. manage to get the schematics to the Rebel fleet. As they are retreating, Vader’s forces intercept them, and as soon as ol’ Darth said something along the lines of “Prepare for boarding”, I knew exactly what was going to happen.

In one of the coolest Star Wars scenes ever, Vader plows through a hallway of Rebel soldiers in an attempt to retrieve the Death Star plans. The last Rebel soldier manages to pass off the information before being lanced by the infamous red lightsaber, and Vader is left watching as a blockade runner makes off with the plans. In the final scene of the movie, we see another Rebel soldier hand off the plans to a white-robed young woman, who reveals that they will provide hope for the Rebels. Yes, Princess Leia herself, in the flesh (and the CGI).

Needless to say, it was very surprising to see Leia make an appearance. I thought we’d hear her name casually tossed out in the middle of some dialogue, but they actually managed to show her on screen. Looking at the movie as a whole, her appearance isn’t really a huge deal; they had Grand Moff Tarkin speaking and interacting with characters despite Peter Cushing having been dead for more than 20 years. But I think it was just so cool how they were able to show us a young Princess Leia once again. It really makes you appreciate technology nowadays. But at the same time, I’m a little concerned that they might abuse it in the future. I wonder if they’ll CGI Alec Guinness into one of the following movies. Oh, God, no…

So Rogue One had its strong moments and its weak ones. If I had to rank the entire Star Wars film saga from best to worst, I’d go:

I think if this movie had a little more character development, I would’ve enjoyed it more. But it seemed like they were just too preoccupied with trying to find a way to connect the story in the perfect manner so as not to cause any inconsistencies with the rest of the saga. It’s difficult creating a movie that has to stay within certain boundaries so that it doesn’t screw up more than 40 years of continuity. But at the same time, I just don’t see why they couldn’t flesh out the characters a little more. These people sacrificed themselves to save the Rebellion, and I couldn’t give two %$&@ about them when they all died. That’s when you know something is wrong. Let’s all hope the next Star Wars movie doesn’t make the same mistakes.

What did you think of Rogue One? Do you agree that it was just an okay movie? Do you think it was the best Star Wars film to date? Let us know your thoughts in the comments or on Twitter.