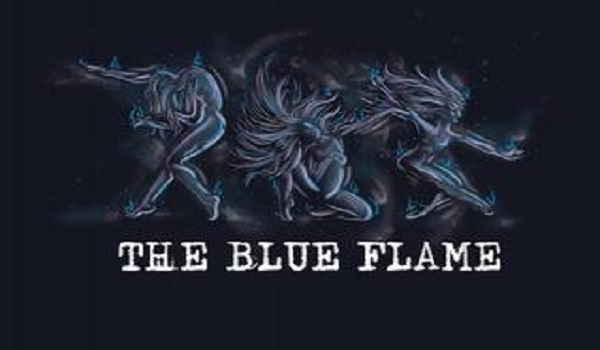 The Blue Flame (currently crowdfunding on Kickstarter), written and illustrated by Rees Finlay, doesn’t have a whole lot of details on the protagonist and what’s going on. But the information it does give you is rather interesting. What I like from the get-go is Finlay’s attempts at hook. We have our protagonist (I believe he’s also called Rees Finlay, unless I’m mistaken, in which case I do sincerely apologise) who wakes up on the 7th May 2016 without the use of his left leg.

It’s quite clever that Finlay incorporated a page prior to the actual start of the panelling to establish this information, almost like you’re reading a diary entry, which links nicely back to the idea that The Blue Flame serves as a semi-autobiography. Finlay’s protagonist attempts to move but fails to do so, ultimately dragging himself across his home. But what is quickly noticeable is the character’s inner monologue displayed across each panel, giving us an insight into his mind.

My first impressions where that of confusion, as well as intrigue, and I quickly got a grasp on the fact there was something not quite right with this person. He seemed slightly delusional, as if suffering mental problems or perhaps split-personality issues. Things got interesting when we were introduced to the comics co-star. Though his name is never given, it is clear that he was some sort of inner-demon to Finlay’s character, not too dissimilar to having an alter-ego that acts as an opposite element.

This segment reminded me of the video game Condemned 2 in which the protagonist, Ethan Thomas, hallucinates a negative version of himself because of his alcoholism. I’m not sure whether this plot has a similar intension, but either-way it looks like a good premise that’s certainly got my attention. I’m a sucker for seeing polar opposite characters, or variations of characters, put against one another because you end up with fascinating dynamics. And often than not the characters in question are tested and pushed to new territories of development.

I really liked the design of the alter-ego. He clearly looked the opposite of Finlay’s character, what with his clear scarring and unbalanced nature. It was clear that this persona held Finlay’s character in some kind of phycological hold. Their conversation with each other felt intense and extremely thought-provoking as you constantly questioned whether or not all of this was a figment of his imagination. Of course the plot mostly points to this theory being absolutely correct, especially after the figment tells Finlay’s character he’s manifested by chemicals. But then you have to ask what brought him to this point of insanity.

It is further hinted that Finlay’s character holds some kind of dark past due to some bad decisions on his part. I really enjoyed how the alter-self felt very sophisticated as a villainous role within the plot. He reminded me a lot of The Joker, in which he had an insane, but perfectly justifiable, view of the world, in which he displays this to Finlay’s character. It’s very obvious that the alter-ego knows everything about Finlay’s character and is able to exploit his weaknesses, truly playing him like the worst case of subconscious interference.

I like how he blames Finlay’s character for his past mistakes, making himself feel more of an organic figure by referring to them both like they are the same person. That he is a part of Finlay’s character (whether he wants to agree or not). The narrative moves to even stranger territories as Finlay’s character attempts to make it up the stairs, continuing the clever usage of monologue to further understand his character, his struggle, and of course his mysterious mistake that happened three years ago.

By his point you have to wonder on his sanity as it appears he is talking to himself in a delusional manner. Then things get really odd when he encounters what can only be described as a spirit. I didn’t know what to think at this moment. A lot of the plot didn’t make a lot of sense but that didn’t matter. What mattered was the constant hook throughout. The themes of this narrative were downright intriguing.

Finlay’s character was constantly displayed as a broken person, not just physically but also mentally, and we could see the different stages of his breakdown – from his leg not working, to his terrible struggle of moving, to being confronted with a manifestation of his inner-demons, to being met with an Angel-like figure offering him a helpful hand.

The bottom-line is: I enjoyed this preview. It is worrying when distributing previews to be reviewed because you have to make sure you have established a hook to keep your audience interested within the confines of the small segment of a larger project. Finlay did everything right. He not only had the constant hook, but also displayed his talents as both an illustrator and a writer, as well as keeping plenty of information back whilst leaving enough behind to keep my curiosity satisfied, whilst still wanting more.

My only gripe would be that there was a slight inconsistency with the drawing, with some panels looking really detailed, whilst others seemed to have less attention. But overall The Blue Flame appears to have a lot going for it. It’s a good first chapter to what I hope to be a larger series filled with fantastic content. All I will say is best of luck and here’s hoping your semi-autobiography series finds its place within the comic-book community.

For anyone interested in psychological thrillers I’d seriously recommend checking out this intriguing tale as I believe it has a lot of potential. Please show your support for Rees Finlay and his work on Kickstarter. Thanks for reading, and remember to share your thoughts on our content either in the comment section below or on our Twitter feed!