Home » Dark Beach #1 and #2 Dazzles with its Detective Fiction 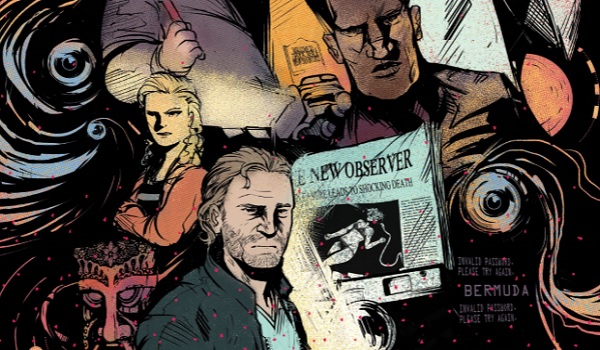 Greetings all you birds and dames out there. I bet you’ve come here looking for that comic review I’ve heard you singing about all over town. Well, you’re in luck. I may be willing to talk if I had the proper…”motivation,” if you know what I mean. Now, hand over the ice, real slow like. And I do mean ice, this Hi-C fruit-flavored beverage ain’t gonna cool itself, see? There’s this comic called Dark Beach that’s been making the rounds on Kickstarter, and we’ve got the rap on issues one and two.

Inside that envelope you’ll find our previous interview with the creators of Dark Beach, and just below you’ll find all you need to know about issue one. I ain’t too keen to give away all my secrets on issue two; if that’s what you’re looking for, you’re tooting the wrong ringer, savvy?

Welcome to the world of Dark Beach. It is the year 2355. Hundreds of years ago the power of the sun was deemed too dangerous for life on Earth, so New Rykjavik was constructed. Utilizing geo-thermal power to sustain life while simultaneously protecting it with a gigantic bubble-shield thing that covers the entire city, New Rykjavik is a place where the “Old Sun” has ceased to exist. Because of this there are “sun-freaks” walking around and hanging out in “sun clubs,” where an artificial alternative to the Old Sun is all the rage. Now I’m not exactly a fan of sun-shiny days, but this is a place that seems pretty dismal; perfect for a hard-boiled noir story.

Our hero is Gordo, a hard drinking and drugging construction worker moonlighting as a crime scene photographer who has visions of the Old Sun. Gordo acts as an informant for Duke, who runs a newspaper called The Observer, and in return Duke supplies Gordo with plenty of “Ghost Choker” to keep his withdrawals at bay. Ghost Choker is some sort of hallucinogenic drug that may or may not help to quell Gordo’s constant visions of the Old Sun. 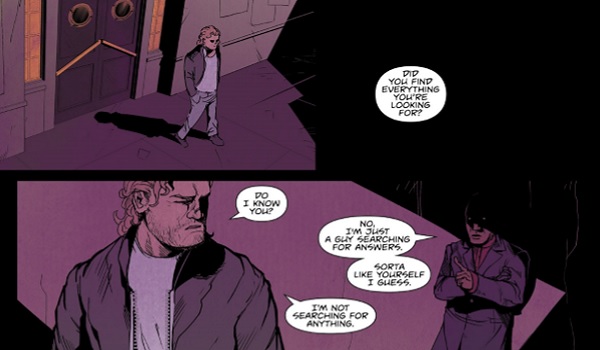 The dialogue perfectly captures the feel of noir fiction.

While photographing one particular crime scene Gordo’s interest is piqued when he discovers that the victim may have been sticking her nose in the wrong business, and it all seems to be connected to the Old Sun. Gordo decides to keep one of the photographs for himself, and does his own digging around after he learns that the victim frequented a sun-club called The Mayflower. After questioning Lilith Junge, the owner of The Mayflower, Gordo learns that the victim’s name was Ket, and that she was indeed “cuckoo” over the Old Sun, as Lilith so eloquently put it.

In typical “reluctant witness” fashion, Lilith sends Gordo on his way and he leaves The Mayflower only to be confronted by a mysterious man. Of course since Gordo is galavanting around talking about Old Sun this and murdered girl that, someone was bound to get upset, so the man roughs Gordo up and warns him to mind his own bee’s wax. Since Gordo is a total badass, the beating has no effect and he continues his investigation. When Gordo revisits his photographs and notices that Ket wasn’t alone at the time of her murder, it sets him on a collision course with the truth.

That’s about it for issue one, but as promised we’ll do a little sneak peak at issue two just to keep the intrigue train a-rollin’ (choo-choo!). Gordo returns to The Mayflower to question Lilith Junge once again, and this time she seems much more willing to talk. We learn that she has a connection to Ket, and that more sun-freaks had been murdered. It seems as though these sun-freaks (love that) are onto something involving a conspiracy about the Old Sun, and that someone isn’t too happy about it. 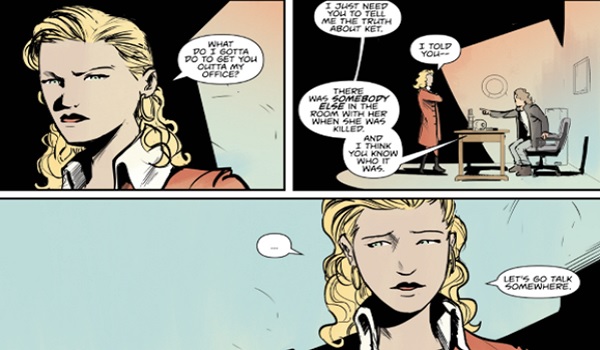 The creative team behind Dark Beach consists of writers Michael J. Ruiz-Unger and Tucker Tota, artist Sebastian Piriz, colorist Ray Jones and letterer Javier Puga. It’s always interesting to see more than one writer on a book, and I think Ruiz-Unger and Tota really nail the whole hard-boiled detective feel in Dark Beach. The interactions between Gordo and Lilith especially showcase the writers’ talents at successfully creating an atmosphere, and the book is just so unbelievably engaging.

The artwork in Dark Beach is spectacular. From the instant I opened issue one, I knew this book was professional grade. Piriz and Jones own the noir aesthetic, and the art style has got just a tinge of the retro-fitted future look that manages to keep the story sci-fi, but also grounded in its own reality at the same time. It’s bleak and cold at times which flawlessly compliments the script, and it’s an all around pleasure to look at.

I can enthusiastically recommend Dark Beach to fans of detective fiction. Seriously, if this is your thing, do not pass this book up. It’s fantastic. On the other hand, if you’re simply a fan of non-superhero comics then Dark Beach is almost sure to dazzle you. To pick up your own copy of issue one check out the Dark Beach website, then feast your eyes on the Kickstarter campaign for issue two where you can get all kinds of sweet rewards. Duck soup!

What are your thoughts on Dark Beach? Let us know in the comments section and on our Twitter page!