Home » Flirting With Death Intrigues the Reader with Sublime Imagery 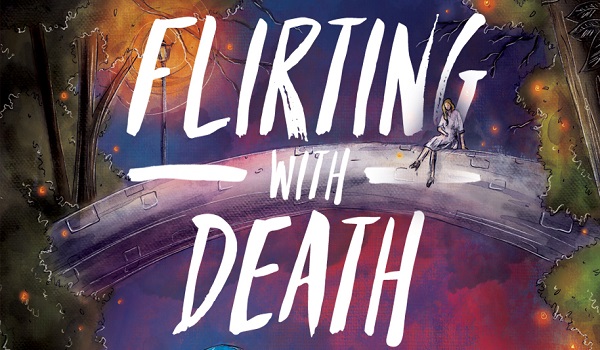 Anthologies are sort of in right now, which makes the collection Flirting With Death a worthy read in the comic realm. Written by Rudra Purkayastha and illustrated by Lyndon White and Paulina Vassileva, Flirting With Death is a series of seven vignettes all dealing with death. But this isn’t a dark, morbid read. If anything, this comic shows the cycle of life and the beauty and despair that intertwine.

The comic is dedicated, “To Those Without A Voice.” What’s interesting is the writing, which is sporadic throughout the stories, seems in support of the art as opposed to the other way around. The lush, abstract imagery uses watercolour to create panels of vast interpretation. The stories range from being about Death itself, in the personification of a regular bearded dude who’s rather passive, to fish that become so enormous they transcend the planet. Other stories involve a self-aware robot and even a biblical retelling of mass genocide. The collection is book-ended with two tales involving Death, the final being a confrontation with a girl ready to end her life. This story is perhaps the closest that comes to any sort of philosophical interpretation, but it never lets up its poetic, almost stream-of-conscious language.

Comics are visual storytelling, but many do not utilise the visual aspect the way this does. Purkayastha keeps his prose simple and elegant. Again, he lets the illustrations do the talking. Some images of music notes appear throughout, suggesting a lyrical quality to the pages. I can imagine soft ambient music accompanying this read and elevating the wonderful panels. Each story is short which makes the entire read go by rather quick. But this is not a comic driven by narrative. It’s a comic where you soak up each panel and let the words and pictures digest inside you.

While death is certainly a big theme to tackle, Flirting With Death never becomes preachy or overbearing. There’s enough for one to dive into and explore their own thoughts on life and death, but its light flow makes it easy to read. As much as it is about death it’s about life too. The character Death suggests that the existence on Earth will only then change to existence in eternity. One’s own thoughts on death and afterlife may affect the overall enjoyment, but again it never tries to make any definitive statement. If anything Death serves as the one to show how beautiful life is and how time should not be wasted. Even the actual act of death, which is shown in different forms throughout, serves as a wondrous thing. It’s not meant to be frightening or unsettling. It’s the natural progression but one that serves to emphasis the importance of life and the meaning of it all.

If you prefer comics that are more driven by narrative storytelling, this may not be suited for you. But if you want a comic that is more about the emotions evoked by imagery and theme, then this is a high recommendation. It’s an anthology where each story stands on its own while together they form different facets of a large picture being shown. While it is a fast read, it’s one that deserves to be revisited and will most likely become a new experience each time.

What do you think of Flirting With Death? Let us know in the comments or on Twitter! You can buy the comic here and check out Rudra’s website here.