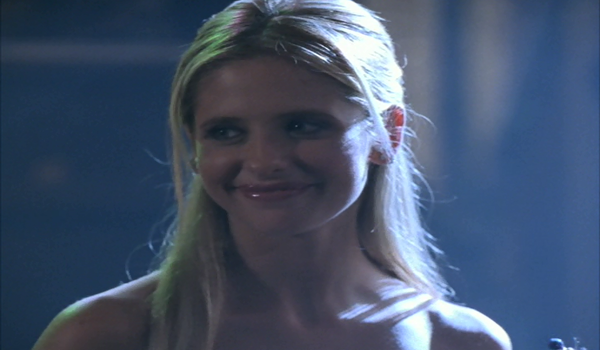 History has given us many great heroines. Joan of Arc, Boudica, Emmeline Pankhurst, Princess Leia, Wonder Woman, Samus Aran, Lara Croft, Sailor Moon, etc. But perhaps the greatest of them all is Buffy Summers, aka, the Slayer. Buffy the Vampire Slayer defined a generation, rewrote the book on what made good television, and remains Joss Whedon‘s magnum opus. Buffy celebrates twenty years of fang-tastic drama, laughs, tragedy, and Buffyspeak. But what makes it such a beloved and great show that will remain legendary for a long time to come?

Technically, Buffy is more than twenty years old, first existing as a piss-poor attempt to create Whedon’s idea by putting it through the Hollywood machine, and the end result mostly exists as a cheesy look on how the modern world views vampires and the horror genre. Thankfully, Whedon was given a second chance on TV and the rest is history. The series lasted from 1997 to 2003 for seven wonderful seasons of laughs, tears, cheers, woes, and lots of vampire slaying.

Buffy’s apocalyptic adventures went through a lot of changes for both the characters and the world it lived in, led by Whedon and his team of talented writers, using the metaphorical concept that high school is hell – though this expanded and changed in the last four seasons. Whedon created the idea as an inversion of the horror tradition of the “final girl character”, only in Buffy, the helpless blonde girl could kick ass. Buffy (Sarah Michelle Gellar) was the Slayer, a powerful warrior who killed monsters, usually vampires and demons, and save the world from the apocalypse.

Each season dealt with a new “big bad” who often had world-ending goals, and each episode dealt with a monster of the week formula. However, the story never drifted away from the journeys of Buffy and her inner circle of friends as they grew up through high school, college, jobs, love, life, and death. The first three seasons are commonly considered Buffy’s golden era, through the now classic escapades in Sunnydale High School, dealing with boyfriends, homework, social anxiety, extreme dead guys in a locker, hyena people, a talking ventriloquist dummy, horny ghosts, mummy girls, evil twins, and tons and tons of vampires.

Buffy’s relationship with Angel was a major focus in the first three seasons, perhaps doomed from the start due to their star-crossed relationship, as well as Buffy’s responsibility as the Slayer clashing with her need to have a life. Right from the start, Whedon and his creative writers demonstrated their knack for a large cast of characters, smooth storylines, and hitting us with the feels. And everything else that came with it – the themes of feminist empowerment, the good sense of comedy and reliance on pop culture references, the quirky slang known as Buffyspeak, the deep-layered storylines, the great fights, and the tears and fears that came from the characters.

Death was a big part of Buffy, since monsters roamed the streets of Sunnydale and an episode going by without a gory death was considered strange. And when a beloved character was given the axe, tears were shed. As said before, metaphor was a big part of the series. Throughout the first three season, “high school is hell” was the big theme as seen through the monsters – vampires represent sexuality, an invisible girl symbolised trying to fit into the student body, fish people symbolised drug abuse…sort of.

Individual episodes dealt with these themes and those of feminism and empowerment. In “The Witch”, a domineering mother literally takes over her daughter’s life via body swapping; “Family” had Tara discovers her father and brother have been lying to her about imminent demonhood to keep the women in their family passive; and in the second season, Buffy sleeps with Angel, but their moment of pure happiness causes Angel to lose his soul (as per his curse), becoming a different person overnight and rejecting Buffy. Something that happens all too often in life. And when Buffy “comes out” to her mother Joyce about being the Slayer, her mother more-or-less kicks her out of the house.

Speaking of coming out, the show is also well known for the relationship between Willow and Tara, one of the first major gay relationships on television. Season four focused on changes in life like going to college and starting new relationships. Poor Xander was trapped in his basement, Willow went through some memorable changes, Giles was looking for a purpose, and Buffy was trying to figure out where she fit in the world after losing Angel and hooking up with Captain Cardboard aka Riley Finn. Spike also became a main character, going from comic relief to lusting stalker to heroic redeemer. Special note should be made to the terrifying episode “Hush”, where the cast had to act without dialogue for half the episode.

Season five introduced Buffy’s sister Dawn, actually a humanised transdimensional key hunted by the bratty goddess Glory. It dealt with heavy themes and heavy blows to the characters, namely with the abrupt death of Joyce from an aneurysm, in the brilliant episode “The Body”, which this writer considers the best episode of the series. Death is not as glamourous as Game of Thrones and The Walking Dead depicts it, and this episode deals with it realistically, in a slow, numb, depressing way. It even incorporated Willow and Tara’s first onscreen kiss with little deliberate fanfare. The fifth season also culminated in Buffy’s finest hour, sacrificing herself for her sister and the world.

Season six is considered by some to be the worst season, but on the contrary, it is a rollercoaster of emotions. Buffy is brought back from the dead, Willow becomes addicted to magic at the cost of her relationship with Tara, Giles buggers off to England, Dawn becomes a klepto, Xander leaves Anya at the altar, and Spike does some pretty unforgivable things to Buffy. Even the villains, the three mostly goofy villains bring about the darkest consequences to the show. And it still hurts to this day. You know what I am talking about. Joss Whedon, how could you? The seventh season wrapped everything up with the gathering of potential Slayers and the fight against the First Evil.

Throughout the show, Buffy asked questions about identity, morality, and responsibility, and the need to grow up and live in such a harsh, unforgiving world. Episodes could vary in tone, from comical ones like “Band Candy”, the terrifying “Hush”, the dramatic “Becoming, Part 2”, and the classic musical episode “Once More With Feeling”, which actually served as a tipping point for the emotional volcanoes the Scoobies were sitting on. The skills of the show’s cast and crew helped make Buffy a timeless piece of television history that sits up there with say The Sopranos and The Wire (neither which I have watched ironically).

And at the heart of this show were the characters. Every single major or recurring character grew as a person, and were very much human (more-or-less), sent through good times and bad times, rose and fell, dragged through rage and sorrow, laughter and happiness. I like to believe that Buffy the Vampire Slayer remains one of the most humane and relatable shows in the world. As Buffy so eloquently put it, “The hardest thing in this world is living in it.”

And thanks to Buffy. She saved the world…a lot.

What are your thoughts of the legacy of Buffy? What are your favourite episodes, moments, or characters from the series? Leave a comment below or on our Twitter feed.