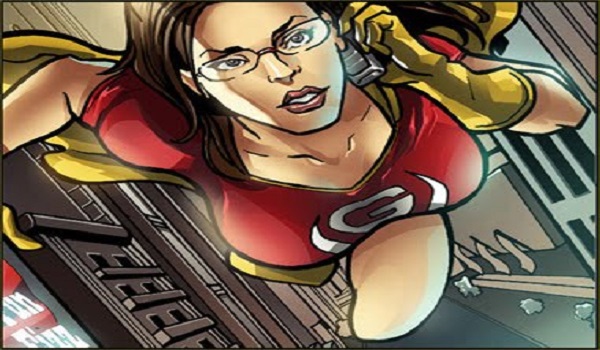 What happens when you’re suddenly given the responsibility of taking on an elusive super villain who has already defeated two heroes? You do what normal college kids do and drink your concerns away. The second issue of Geek Girl is appropriately titled, “Ruby and Summer Get Trashed!” as the titular character and her friend immediately go to a club after watching the news.

After the opening, the issue has little to do with the events of the first one as the bulk of it is in the club with Ruby trying to come to terms with her identity. Being Geek Girl and putting on her glasses runs the risk of her losing her sex appeal. The words “geeky” and “sexy” never seem to belong in the same sentence and, even with the reputation of being a superhero, it still presents an issue for any young person. Early on in the comic, Ruby gets hit on by a bartender and promised a drink later only to be turned down when she returns wearing glasses. The glasses are more than a secret identity. They negatively affect her appearance which, in turn, affects her confidence. Summer tries to assure her that she should feel proud of the way she looks, glasses or no glasses.

As someone who has: A) Worn glasses before and B) Been a geek, it’s easy to empathize with Ruby. Especially so since I don’t have superpowers. The superficial obligations of looks and appearance are extremely challenging when you’re young and always comparing yourself to the people around you. Ruby’s priority has nothing to do with saving the world or fighting a bad guy. She deals with insecurity, possibly the greatest villain of all, and how to accept yourself.

Even though the issue is entirely set in a club, the comic does a good job at subtly injecting elements of the world and the conflicts it presents. One of Ruby’s friends tells her that after she hit a guy who was coming on to her friend too strong, he had a crack in his face and then he melted into thin air. We also get a taste of a larger threat at the end which could lead to more struggle for Ruby as she’s become a one-woman army in the superpower battle.

As with the last issue, the similarities to Spider-Man are undeniable, but it’s all the better for it. Getting a female perspective on being a geek and navigating through college and the social life it entails is refreshing. But it also takes a different spin on the “secret identity” aspect as she doesn’t worry so much about an alter ego but an alter look. Even though her glasses grant her special powers, Ruby’s confidence dwindles when she puts them on. And college kids are seemingly not impressed by super powers when social cliques are more of a priority. This comic is extremely accurate in its depiction of the overall douchy-ness of people in college. It’s understandable that Ruby’s conflict with her fellow peers is more pressing than with the nameless villain wreaking havoc.

What did you think of the second issue of Geek Girl? Comment below or send us a Tweet!