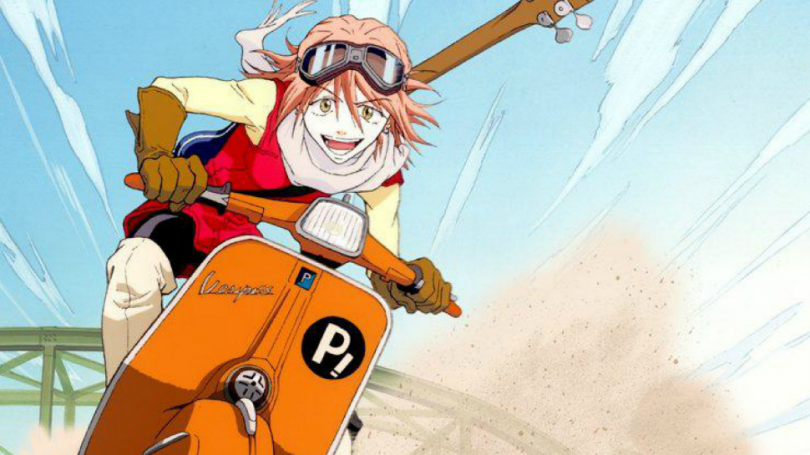 The coming of age story remains a popular tale and template throughout the media. Perhaps one of the most creative, wild, and imaginative of takes on the formula is the anime FLCL (pronounced “Fooly Cooly”, or “Furi Kuri” in Japanese). Created by Kazuya Tsurumaki and Yōji Enokido of Neon Genesis Evangelion fame, FLCL may look like a six-episode series of plain nonsense, frenetic animation, and a wacky plot (all true). But, it is really, as TV Tropes describes it, “filled with allegorical and symbolism-soaked writing and imagery which ranges from clever to truly brilliant, along with strong characterization and goofy, off-the-wall humour”.

In this Rerun Review, we’ll be examining each episode of FLCL, namely the symbolism and allegory it has in connection to the coming of age narrative and how the characters and imagery represent the different stages of physical, emotional, and mental growth. Oh, and also as an excuse to listen to the rockin’ soundtrack performed by The Pillows. So, let’s grab our bass guitars, leap onto our mopeds, and steal some super spicy curry.

It would make sense to explain the overall story of the series. Naota Nandaba is a 12-year old kid who lives in the boring town of Mabase. His big brother Tasuku is off in America pursuing a career in professional baseball, leaving Naota in a world of immature adults, with Tasuku’s (ex) girlfriend Mamimi for company. Naota gets run over by 19-year old alien Haruko Haruhara, walloped by her bass guitar, and she then moves into the family bakery as a housekeeper and Naota’s roommate. Soon, fighting robots emerge from Naota’s head, which Haruko fights, and are connected to the iron-shaped Medical Mechanica factory looming over the town.

Yeah, the plot does sound pretty crazy when you try to describe it to someone. However, the first episode heavily deals with the themes of the often unwanted, sudden arrival of puberty.

Naota tries to act like a mature adult in a town where all the adults and just everyone who isn’t twelve acts childish and immature. However, Naota is still a child in mind and heart but tries to act grown up and hide how he really feels. His big brother Tasuku is in America pursuing a career in professional baseball. To Naota, his brother is pinnacle of adulthood and maturity, and idolises him. He carries his brother’s baseball bat around at all times. Mamimi is Tasuku’s girlfriend, later revealed in the episode to be his ex, though it is implied Tasuku may have not broken up with her face-to-face or at all.

Mamimi is a teenager but refuses to grow up, often bunking off school yet remains perpetually wearing her uniform. She is weak-willed and dependent on others, namely on Tasuku, who she views as her emotional crutch in life. However, with Tasuku gone, Mamimi takes her various frustrations and sexual desires out on Naota, as seen in the opening scene. She nicknames him “Ta-kun” and uses him as a substitute for Tasuku. This spreads to other characters, like a cat she adopts, and one of the Medical Mechanica robots which at first acts like a dog.

Mamimi likes looking after weak-willed creature like Naota, but as he matures, she gets left behind. Naota is clearly confused yet curious about her habits of touching him, Mamimi claiming she’ll “overflow” if she doesn’t, implying she’ll either orgasm or have a mental breakdown. Naota tries to suppress and reject his feelings towards Mamimi, as seen when she offers him a sour-flavoured drink. Naota prefers sweet drinks, symbolising the change between childhood and adolescence. Naota chucks the drink away, rejecting it (and adulthood), and tries to let Mamimi know that Tasuku has a new girlfriend and to end their own weird relationship. The scene also hints that Naota chucks the drink away since Mamimi just drank from it, and they would share an indirect kiss.

Naota wants to avoid puberty and his strange desires like the plague. Well, too bad, as he suddenly gets run over by Haruko on her moped. She then performs CPR to revive him, though it is clearly a kiss, and then pulverises him with her guitar before racing off into the sunset. Haruko represents both puberty and adolescence, along with often awkwardness, irritation, and unpredictability that comes with puberty. Naota immediately dismisses her as a “stupid adult who doesn’t know how to grow up”.

However, while Mamimi leaves him with a hicky, Haruko has left Naota with something a little more difficult to hide: A horn has a grown out of his head, which he tries to hide from his friends and family. The horns are an obvious symbol for an erection, which Naota is embarrassed by and hides them under his numerous hats during the show. He gets stalked by Haruko until he finds her at home, employed as a housekeeper after running over his dad Kamon. Naota’s dad slides back and forth on the scale of maturity, adult enough to run the bakery and own his own magazine, but still acts like a buffoonish man-child most of the time.

Haruko moves into Naota’s room and tries to occupy the top bunk, previously owned by Tasuku. Naota doesn’t want her to sleep there, symbolising his change of perspective when he comes to view Haruko as a stand-in of sorts for his brother. Naota later returns to Mamimi upon learning she visited the house, learning Tasuku hasn’t been in contact with her at all. When it becomes obvious Tasuku has another girlfriend, Mamimi collapses upon “overflowing”. Just then, the horn suddenly grows, transforming into the robot Canti, and the hand of another Medical Mechanica robot trying to capture him.

Canti will come to represent Naota’s brother for both him and Mamimi, being a character who is designed to help others, be an upstanding figure, and acts kind and caring – a reason why Naota admires his brother, and why Mamimi idolises her ex-boyfriend. Canti destroys the robotic hand, only for Haruko to leap in and wallop the back of his head, reducing him down to a more gentle, childish character as indicated by the change in his colour. Canti goes from red (representing adulthood) to green (representing growth, safety, and fertility). For a brief moment, Naota views Haruko as similar to his brother, beginning his attraction towards her and journey through puberty and maturity.

And the end of the episode, Naota has gotten used to Haruko’s presence, but is now baffled by Canti’s presence in the house. However, he maintains a close relationship to Mamimi despite trying to be honest with her twice about the basis of their friendship. In the closing scene, she offers him the sour-flavoured drink, which he takes this time and drinks from, despite stating he still prefers sweet drinks.

Did you enjoy this analysis? Are you a fan of FLCL? Leave a comment below or on out Twitter feed.