Home » Are Buffy and Sailor Moon the Same Series? 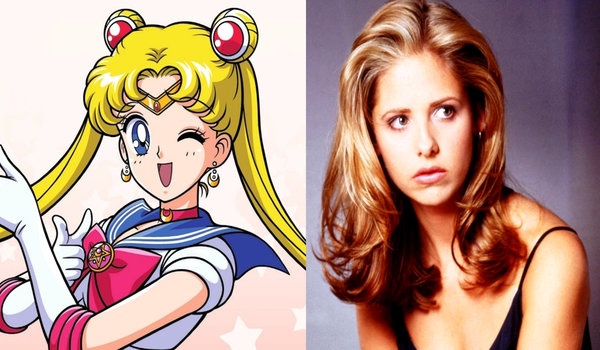 Read this description – A ditzy blonde teenager reluctantly takes on a great destiny as a hero of the people, destined to fight the forces of evil using supernatural powers, and all the while dealing with the struggles of family, school, and boys. Now, what show comes to mind? Probably Buffy the Vampire Slayer or Sailor Moon, or possibly Sabrina the Teenage Witch if you haven’t watched the others. It can’t be denied there are many similarities between Buffy and Sailor Moon, and we are going to take a look at the many connections between the Slayer and the Guardian of Love and Justice.

Buffy is more of the straightforward programme when it comes to promoting girl power, created by Joss Whedon, first as a cheesy movie in the 80s, and then as the more popular show which ran from 1997 to 2003. It encouraged other shows to introduce stronger, more complex heroines, but Sailor Moon did the same thing, popularising and revitalising the “magical girl” genre in anime. Created by Naoko Takeuchi, Sailor Moon began as a manga in 1990 with the anime debuting in 1992, coincidentally ending like a month before Buffy aired.

The similarities between the two shows are surprisingly numerous – their protagonists are alike, their mentors, their supporting characters, their villains. It is mindboggling just how much the two have in common when it comes to character and narrative tropes. Of course, there are some distinct difference – for example, Buffy doesn’t need a magic transformation sequence every episode, and Sailor Moon doesn’t stake badguys. But both deal commonly with monsters of the week plots, the woes of a teenager in love and in high school, and apocalyptic events that clash with important events in their social lives.

Let’s have a look at the characters. First off, Buffy and Sailor Moon herself Usagi Tsukino. While Buffy goes through a string of trauma and tragedies, Usagi’s personal maturity stems from the repetitive end of the world scenarios that hit her every few months or so. Buffy starts off as a somewhat vapid, whiny teenager but evolves into an even-tempered, thoughtful and king heroine. Usagi pretty much remains the same. Oh, yes, she matures, but still maintains her whiny, often bratty, and book dumb attitude all the way through the anime. Both characters wish to live normal lives (go to school, fall in love, etc.), but are willing to take a stand against evil.

Both are granted a great yet dangerous responsibility and birthright, neither of which are thrilled with. Buffy is the Slayer, a role created by misogynistic men long ago, training the Slayer as the ultimate warrior. Usagi is Sailor Moon, the reincarnation of Princess Serenity from the fallen Moon Kingdom, a goddess with great power. However, both broke the mould with their modern aspirations and personalities, causing grief for their more traditionalistic mentors Rupert Giles and Luna. Giles and Luna are quite similar, being a little stuffy, often exasperated by their students’ antics, provide a lot of exposition but also parental guidance.

A big part of both shows is the heroine’s love live. Buffy has three major love interests: Angel, Riley, and Spike. Usagi has Mamoru Chiba, aka, Tuxedo Mask. Angel remains Buffy’s most important boyfriend, being her first love, her first loss, becomes a villain, is sent to Hell by her, comes back and ultimately leaves her out of safety. Both characters represent the dark, mysterious stranger archetype, hiding an element of danger, but also provides a supporting, loving crutch for our heroines. In opposition, Angel’s story is of redemption (since he is a vampire), while the amnesiac Tuxedo Mask seeks identity and purpose. He also becomes briefly evil a couple of times, though out of brainwashing rather than by choice.

We then come to our supporting characters, the chains who link Buffy and Usagi to reality, and allow them to have normal lives whilst still aiding in the other side of their lives. For Buffy, it is the Scooby Gang, and for Usagi, it is the other Sailor Guardians. All of them, save Xander Harris, possess superpowers or related abilities. Comparing the multitude of characters to each other is a little tricky, but let’s take a look.

Buffy doesn’t really have any normal friends apart from Xander, who occasionally gets the short end of the power stick, but he remains her closest connection to normality. He is a loser, a monster magnet, and spends the whole of the fourth season stuck in his parents’ basement. And yet, he is loyal, strong-hearted, and has the greatest faith in Buffy and his other friends than any other character…well, unless he loses an eye.

His counterparts are a mix of Sailor Moon characters, namely Usagi’s BFF Naru and her wacky boyfriend Umino. Both remain Usagi’s average mates who mostly exist for her to interact with someone in school, and gradually disappear from the anime altogether despite some interesting plot arcs early on. While Naru links with Xander’s normality, Umino once had a crush on Usagi, like Xander had on Buffy, but both boys end up with different girls. Alternatively, Xander is similar to Makoto Kino/Sailor Jupiter. Both are pillars of strength, but also have a rocky love life, Makoto often pining after her “sempai” (a Japanese term for a senior student in school), while Xander has his own history of romantic issues.

Willow Rosenberg is easy to nail down. She is a lot like Ami Mizuno/Sailor Mercury, both being intelligent, slightly nerdy, yet shy girls who come out of their shells and grow to become stronger, confident characters. Both also serve as the voice of reason in comparison to the more vocal members of the team, but can be a force of nature if messed with. Willow’s descent into magical addiction and brief stint at evilry doesn’t really apply to Ami, unless you count her time as a villain in the live action series Pretty Guardian Sailor Moon, where she becomes Dark Mercury akin to Willow. Willow and her girlfriend Tara could also be associated with Sailor Uranus and Sailor Neptune, mainly because they were all amongst the first lesbian couples to appear on television.

For the short-tempered Rei Hino/Sailor Mars probably matches up best with Cordelia Chase, Buffy’s high school nemesis. Rei’s personality has varied in-between continuities, but in the anime, she is bossy, snarky, rude, and often teases Usagi. Both characters have quite the temper and very opinionated. Rei is a shrine maiden and possesses a sixth sense that can detect evil. Cordelia gets a similar ability in the Angel spin-off, allowing her to see visions, helping her to mature into a wiser character.

Personality-wise, Minako Aino/Sailor Venus is a bit like Anya, the ex-vengeance demon turned wacky-literal-minded-comic relief. Both are quite ditzy, a little weird, yet quite brainy and can pack a punch when the time comes for it. However, Sailor Venus also shares similarities to Kendra, Buffy’s initial successor as the Slayer. Kendra was trained from an early age to be the Slayer, so she is not all that savvy when it comes to socialising. Minako doesn’t have this problem thankfully. Instead, the connection comes from the fact both were trained in preparation for their sacred duties as heroes. Minako was the first of the Sailor Guardians to be activated and moonlights as “Sailor-V”, aiding the others from afar. Minako and Kendra act like a perfect hero, yet have more flaws than Buffy and Usagi.

Perhaps the biggest similarity between both shows is the little sister character. Buffy’s sister Dawn comes out of nowhere in the fifth season, revealed to be an interdimensional key placed into Buffy’s protection in human form. The character of Chibiusa, is Usagi and Mamoru’s daughter-from-the-future, and travels back in time seeking help. Both girls come off as even more brattier than their older sisters. Chibiusa even retroactively inserts herself into Usagi’s family as a cousin like Dawn is as Buffy’s sister. Dawn and Chibiusa later train with their older sisters to stand on their two feet and become powerful women.

In regards to Faith, Buffy’s secondary successor who turns flat out bad girl before undergoing a long-term redemption arc, she is a bit like Sailor Saturn. Saturn is the designated “bad” Sailor Guardian since she is the Guardian of Death and actually destroyed the Moon Kingdom. By no means is Sailor Saturn evil, but her role as a destroyer reflects the true purpose of the Slayer, something which Faith symbolises a bit more than Buffy does. Heck, Sailor Saturn and Faith even have an evil father figure.

Admittedly, the villains in Buffy are a lot more interesting than those of Sailor Moon, but the mirroring continues. Buffy’s first major adversary isn’t the Master, but rather his minion, Angel’s ex-lover Darla. In Sailor Moon, while the boring Queen Metaria is the big bad, Queen Beryl serves as the major antagonist, and has a psychotic obsession with Tuxedo Mask and wants Usagi dead. Others can match up – you have an evil pair of lovers (Spike and Drusilla/Ail and Ann), a vain queen who seeks the power of another character (Glory/Queen Nehelenia), and the personification of evil (The First Evil/Sailor Galaxia).

So, yes, there are plenty of similarities between Buffy and Sailor Moon, but they are purely coincidental. And yet it is fascinating how two franchises from opposite sides of the world can interpret the same idea of women empowerment so well. Nowadays, both remain popular and beloved classics of television, still highly regarded as groundbreaking series when it comes to creating a strong, heroic woman who remains very relatable to so many.

Which is your favourite show? Buffy or Sailor Moon? Leave a comment below or on our Twitter feed.