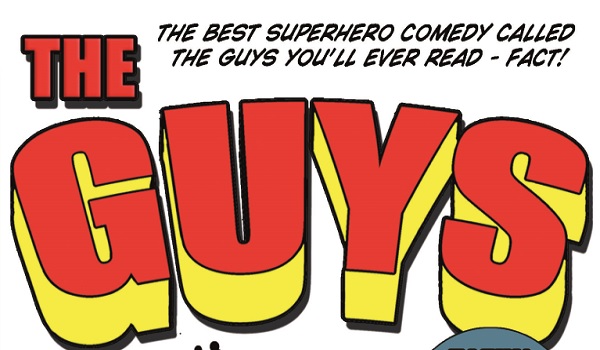 Welcome friends, to another comic book review! Today we will be taking a look at issue five of Richard Carrington‘s The Guys, which is a superhero team-up comic not unlike The Avengers except that it’s really not like The Avengers at all! The Guys is sometimes offensive, always crude, and downright hilarious, but it is most certainly not for kids so make sure you hide it somewhere high up and throw out all your ladders, step stools, chairs, tables, or any other surface that might encourage climbing. That’s what I would do, anyway. So then, let’s strap on our spoiler-free reading glasses and check out issue five of The Guys!

For those of you who haven’t had the chance to read the first four issues of The Guys, it is about five friends named Chris, Vinnie, Eddie, Billy and Al who all have different super powers. Well, except for Al who doesn’t seem to have any powers (yet?) to great comedic effect. Something to note about this most recent, upcoming installment is that it marks the very first time in which the gang don actual superhero costumes and their official introduction scene is something to behold; Captain Fantastic, Veto, Force, Floater (hmm) and…wait for it…Colonel Incredible! Yes, Colonel Incredible. Care to guess who he is? If you said Al, you’re right! That’s right kids, the man with zero superpowers is called Colonel Incredible, much to his own dejection in a stand out scene.

This particular issue deals with a new type of threat that has yet to be seen in The Guys when a super-powered villain shows up and starts robbing museums. The villain calls himself The Shifter and he has the power to teleport, which also allows him to deflect bullets and other projectiles (cool word, right?) at will. Of course since The Shifter is super-powered that means our heroes will have to step up their game in order to stop him, leading to the reveal of their official costumes. My personal favorite costume is Al- I mean, Colonel Incredible’s since it consists of his regular street clothes and a cheap ski mask. 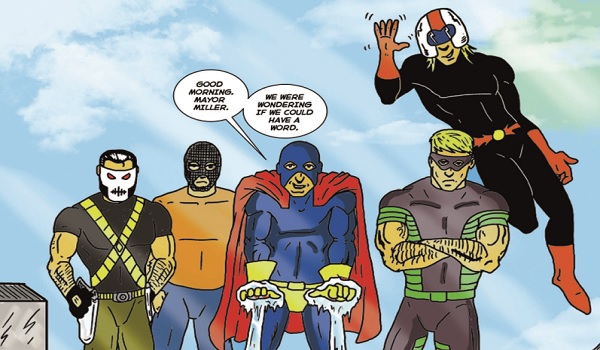 I cannot stress enough just how funny this book is. Carrington’s stuff is always hilarious but The Guys takes the cake. Captain Fantastic and the rest of the crew are a tapestry of overzealousness, ineptitude, machismo, violence and adult language, and it’s great. Each character brings something to the table (especially Colonel Incredible, tee hee), and the group is well rounded and provides enough variety to keep things interesting and fun throughout. There’s a certain level of cheese (not the food) that is absolutely purposeful and works flawlessly for this story.

Carrington’s script is excellent and his brand of humor is something that I can get down with any day of the week. All the dialogue is beyond hysterical and the interactions between virtually all the characters managed to crack me up consistently throughout this issue. Of course you may have gathered that one of my favorite parts of issue five is Colonel Incredible and I won’t deny that in any way, shape or form, but there are numerous comedic treasures in The Guys that make it the kind of book that can be read over and over again. 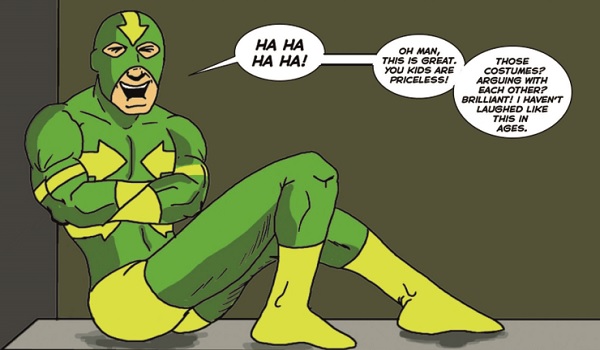 The artwork in The Guys is also handled by Carrington, and to the surprise of no one he does a fantastic job. Everything is drawn and colored well, and nicely compliments the tone of the script. The costumes are hilarious (especially…well, you know) but not in an over the top way; they’re just right. The book pays homage to superhero comics with some of the character designs, whether intentional or not, which I think is also a nice touch.

I can easily, easily recommend The Guys to readers who like their comics packed to the brim with comedy and gloriously filthy language. Even for those who haven’t read the previous installments, this fifth issue is a great place to jump on since it seems to be the beginning of new arc where many aspects are being introduced to the story. I must reiterate that this book is definitely not for children which is mostly due to adult language; there’s just so much of it (in a good way) that there really isn’t a “safe” page to be had, and I think that’s awwwlright.

To find out more about The Guys and to grab your own copy head on over to the official Kickstarter campaign where you can pledge for some great rewards!

Will you be supporting The Guys on Kickstarter? Let us know in the comments section and on our Twitter page!