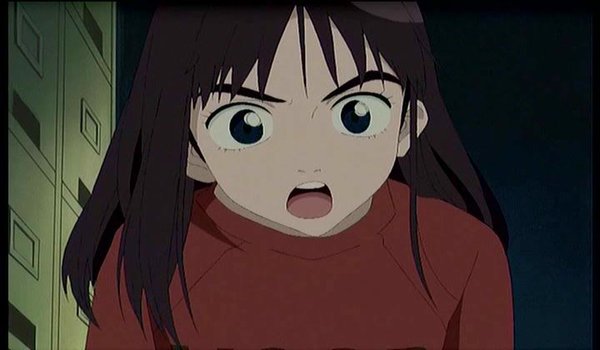 The core theme of the anime FLCL is its coming of age story, and the need to change and mature. For protagonist Naota Nandaba, he tries to act like a mature person and rejecting his natural childish instincts, looking down on the immature action of the adults in his life. The presence of Haruko Haruhara, representing Naota’s intrusive, unwanted puberty, and immature teen Mamimi Samejima, shape him into a more mature character, by actually growing up internally rather than acting so externally.

The third episode focuses on Naota’s relationship with his schoolmate Eru Ninamori, a girl who also acts mature but is more comfortable with her age and attitude. Ninamori has had minor roles in the previous episodes, teasing Naota, but it is obvious she has a crush on him. Naota, you are too young to have a harem (though with Haruko and Mamimi, those relationships are more complex). Ninamori’s father, the mayor of Mabase, is caught in a scandal over a possible separation from his wife, and an affair with his secretary.

Ninamori upholds a demeanour that she is unaffected by his father’s actions, though this turns out to be untrue. She acts like a “nouveau riche princess” (as the secretary calls her) to hide her true feelings, wishing for her parents to stay together. She is a victim of her father’s immaturity, unlike Naota who is Mr. Sensitive and hides his inner feelings under his supposed maturity and embarrassment around his wacky family.

Speaking of Naota, he has been roped into the upcoming school play of Puss in Boots, and voted in to play the titular cat. He isn’t too thrilled with the idea and ditches practice since he views it as being beneath him. He now regards Haruko as an irritation but someone he must rely on. She starts giving him super spicy curry for school lunch, which symbolises Naota’s growing sexual desires, and his attraction towards Haruko. To make matters worse, he has sprouted another pair of horns out of his head resembling cat ears, and Haruko keeps teasing him about them being exposed. I think the metaphor is pretty obvious.

In class, we meet Naota’s very, very, very, immature and pathetic teacher Junko Miyaji, who gives lectures about cats in class (yeah, seriously). Naota’s friends Gaku and Masashi show him a tabloid magazine which happens to have news on Ninamori’s dad. Miyaji looks at it, freaks the hell out, and yells through a megaphone about the scandal, banning the class from upsetting Ninamori despite doing it herself. How did this lady become a teacher? Naota is sympathetic to Ninamori, but not enough though to hang around for rehearsals.

Instead, he finds his way back to Mamimi again, who has taken to donning a pair of cat ears and taking selfies with Naota. He whines about being volunteered into the play against his wishes, while Mamimi shares his feelings of embarrassment, yet liked the plays since her parents would watch. Ninamori wants this to happen herself, explaining why she is so adamant for the play to go off without a hitch, insisting Naota attends the rehearsals. Mamimi discovers Naota’s cat ears and starts playing with them (again, the metaphor is obvious). What isn’t obvious is this episode’s strange obsession with cats. Japan are pretty crazy when it comes to felines – Hello Kitty, Doraemon, cat girls, the lucky cat. It goes on.

Briefly looking up the symbolism of cats, they can represent secrecy, flexibility, and change. Well, that fits quite well with the episode. Naota is trying to hide his cat ears and his immaturity, and Ninamori is hiding her true feelings about her parents. Ninamori later refers to Naota as “[her] cat”, implying a close sense of trust and understanding she feels towards him. She can be herself around Naota, though he struggles to do the same around her. Out of the three girls Naota has a relationship with, Ninamori is the most sensible and normal. Haruko represents Naota’s puberty and sexuality, while in a way, Mamimi represents addiction and Naota’s desires. Ninamori is what Naota should be and will become, a child who acknowledges he is a child and matures over time rather than trying to be.

Naota’s dad Kamon is the author of the tabloid magazine, and Ninamori catches him trying to sell copies to an old lady and her very weird-looking dog. The media storm becomes a frenzy and the secretary legs it. Unable to go home, Ninamori ducks into a train station, contemplating her situation, claiming that all she has is her cat. Naota appears, amused that she is hanging around town like a delinquent. They discuss Naota’s lack of commitment to the play, but the conversation turns to Ninamori’s home troubles, but she disregards it as a minor bother.

Just then, Haruko comes barrelling down the road on her Vespa, causing the usual havoc. She avoids a cat in the middle of the road, her Vespa flipping down the road and gives Naota another face of tyre. He is sent flying at Ninamori, and in a moment, it looks like they are going to have an accidental kiss (complete with sparkles, Ninamori blushing and her lips on offer). Naota instead headbutts her and is knocked out. Ninamori then notices his cat ears, and falls unconscious upon getting stomach pains.

That night, Ninamori is having dinner at Naota’s house, and Kamon invites her to stay the night until the circus media leave her home. However, Haruko has subjected the family to a super spicy curry which only she, Ninamori, Kamon, and Canti (who is somehow eating it despite being a robot) are immune too. Ninamori remains stone-faced as the others discuss her situation, which she repeatedly replies to with, “Anyway. It’s no big deal.”

She dashes to the bog after the curry disagrees with her stomach, and has a chat with Kamon, revealing she may have tipped him off about the secretary’s details to put in the magazine, just to get rid of her. Yes, it turns out Ninamori, who is the class president and the mayor’s daughter, is willing to do some underhanded things to get what she wants.

Naota finds Ninamori in his bedroom, wearing his pyjamas but also a pair of glasses, revealing she is short-sighted and wears contacts in school. Naota, a little awkward about the situation, suggests they avoid each other for a little while so no one misinterprets the idea that they spent the night together. Ninamori is unfazed, sitting beside Naota on his bed, which he immediately freaks out about. Despite being sexually harassed on a daily basis by two older women, Naota seems the most sensitive and embarrassed about sitting on a bed with the girl his age. Possibly, he has a crush on Ninamori and finds the situation awkward.

Ninamori then reveals she knows about his cat ears, which she comments are perfect to play Puss in Boots. Naota asks why he has to play the cat, to which Ninamori drops the bombshell that she rigged the votes to put him in the role. She goes on to pretty much explain Naota’s whole character by comparing him to Puss in Boots – both are characters who hide their true identities to take on a better one, doing so for so long that the lie about the truth and it lets them find happiness. I’d say this is a very important part of the anime’s story, but it is a little difficult to pay attention to that when Ninamori is invading Naota’s personal space a little bit too much. Haruko appears on the top bunk, admitting she overheard the whole thing but doesn’t care. She then grabs Naota and starts fondling his cat ears, despite Naota’s not-too-impassioned objections.

At school, Haruko and Canti drop in to give Naota his curry lunch for rehearsals, but Naota is having none of it and tries to leave. Ninamori stops him and makes it clear she is doing the play so her parents will see it together. When Ninamori points out that Naota is a child and should act like one, Naota refuses to and knocks Ninamori’s hat off. In anger, she pulls his hat right off, exposing his cat ears. He then retaliates, revealing she rigged the role votes.

But then, Ninamori suddenly suffers from a crippling headache and sprouts Naota’s cat ears. One thing I forgot to mention, apart from Haruko being a space patrol officer, is how and why Naota can make robots come out of his head. It is an ability called N.O., which lets a person summon objects and energies through light-years of space through portals in their heads. That is why Haruko walloped Naota with her guitar in the first episode, because he has a compatible head for N.O. activities. And it appears Ninamori has too. This was triggered when Naota headbutted her.

The cat ears belong to the next robot from Medical Mechanica, using Ninamori’s unconscious body as a weapon. Haruko tries defeating it, but fails, and races up to the roof with Canti, summoning her Vespa to aid in the fight. Naota tries to rescue Ninamori but is sent spiralling into the air, dropping his curry into the robot’s mouth. It reacts badly and falls off the roof, before being obliterated by Canti’s cannon mode.

Ninamori is fine, and some time later, the plays goes ahead, with Naota playing the cat without a complaint. He narrates that Ninamori’s dad didn’t get prosecuted, and Ninamori is still around, much to his happiness. The final shot shows Ninamori wearing her glasses, to which she tells Naota that they are fake, hinting she is now going to drop her mature demeanour and act like a kid should.

Ninamori’s role in this episode is vital, well aware that Naota is hiding how he truly feels, allowing her to relate to him more. While that scene on the bed is giving out strong indications of romance, it may also hint that she trusts him so much that she can spill the beans on her plan, in a close and personal manner. Heck, her final line in that scene is rhetorically asking for Naota’s opinion on the intricacies and deviousness of her plan, since she views him as a person who is hiding something like she is.

What are your thoughts on the relationship and growth between Naota and Ninamori? And what is with everyone being so nuts about cats? Leave a comment below or on our Twitter feed.