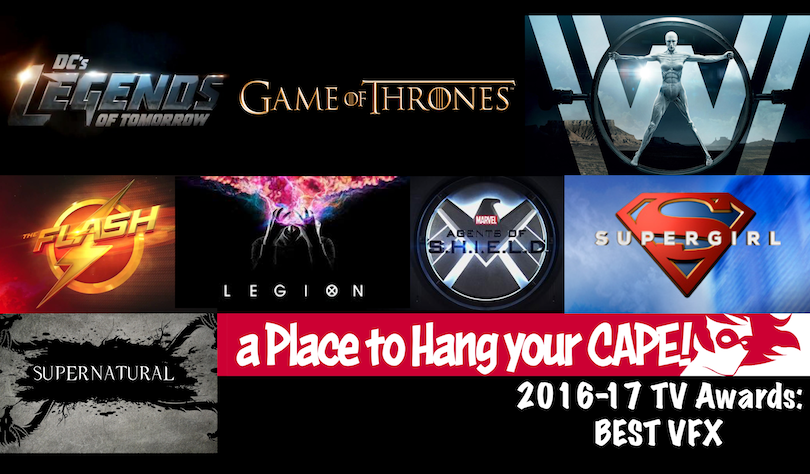 Most superheroes wouldn’t be nearly as cool were it not for the experts behind the camera working to make them look good. The VFX masters make our favorite dragons fly, Ghost Riders flame-on, alien beings sparkle, and, most importantly, make it all feel believable. Check out our nominations for Best VFX!

The folks over at Agents of S.H.I.E.L.D. never fail to leave our jaws on the floor as they produce visuals rivaling even their blockbuster counterparts. Particularly impressive is the fact that it’s often difficult to tell what’s real and what’s actually a perfectly executed VFX shot. Whether it be Ghost Rider’s flaming accoutrements, the Zephyr One’s rocky take-offs, or a room full of LMDaisies, the visual effects of Marvel’s flagship TV show never disappoint.

Gargantuan gorillas, terrifying sharks, multiple speedsters, and enough time-shifting to make our heads spin, the Flash relies heavily on VFX to make the show such an exciting one to watch.

It’s a bird, it’s a plane, it’s a… show that would be nothing without some Grade A VFX work! Considering Supergirl is about an alien fighting other aliens, it’s no surprise that the visual effects are as pivotal as they are.

With massive battle sequences, white walkers, enough bloodshed to make Hannibal Lecter hungry, and, oh yeah, dragons the VFX on Game of Thrones ranges from subtle to glaringly obvious as each detail is perfected to make the show as good as can be.

You can’t have a show about a band of misfits traveling around on a veritable spaceship without ensuring that the VFX are next-level.

After 12 seasons dealing with demons and a host of other magical beings, the group at Supernatural have gotten the effects down pat- ensuring that even the hokiest of characters feel real.

Considering Legion follows a psychologically questionable mutant, it’s no surprise that the show is a visually enticing as it is. With an impressive combination of trippy aesthetics and utterly believable effects, Legion has quickly established itself as utterly original show that doesn’t shy away from anything. (See: the Shadow King + Lenny in a wall).

As a show focused on robots gaining sentience, it’s no surprise that the visual effects of Westworld are as stunning as they are. Despite the general absurdity of this show (that’s a good thing) each moment is grounded in reality due simply because the details implemented by the visual effects artists are stunning.

Which show’s visual effects were the most epic this season?

Poll Closed. Check out the victors of the 2017 TV Awards!