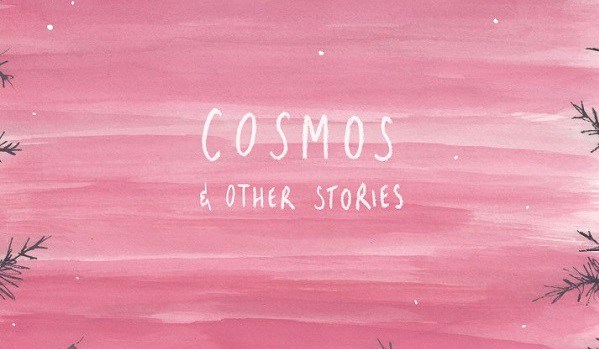 Because I needed an excuse to chat with a cool indie comic creator, we interviewed Rozi Hathaway about her recent book Cosmos & Other Stories. Because my boss needed an article I killed two birds with one stone. Enjoy!

A Place to Hang Your Cape: This book was a collection of short stories, why do that as opposed to one big story?

Rozi Hathaway: I remember reading John Cei Douglas’ Show Me the Map to Your Heart and Other Stories a few years back and really being drawn into these worlds in the short stories. Then, after working on my own comic shorts for a number of years for anthologies and submissions, and I fell in love with that charm of being placed, albeit briefly, in the centre of another life or another world. For one short moment of 1-6 pages you can really feel a profound effect, and that’s what I wanted to hone in on and create in Cosmos.

AP2HYC: What was the main thing you were trying to achieve with this book?

Hathaway: Initially this book began as a way to dissect my own thoughts and feelings at a difficult point in my life. It was a cathartic way to understand what was going on and try to turn it into something positive. As I went on and wrote the rest of the stories, it became easier to really look outside my own situation and understanding different areas of loneliness and grief that bring us, as human beings, together in unity. My hope is that people will pick up the book and feel like calling that friend they never speak to, or to reach out and tell someone if they’re feeling low, or even just be a little more aware that everyone we come across is going through their own battles right now. We’re all human, and I think it’s easy to forget that sometimes.

AP2HYC: What was it like putting this book together and getting it out to print?

Hathaway: I guess normally I have a methodical approach to writing and creating work, but with Cosmos I only had a vague outline of what I wanted to do and just wrote, created and finished each story one at a time, tying them all together as I went along. It was nice, in a way, to tailor each story to the previous ones and pace the book that way. Also, Cosmos was my first experience of being published – so once I’d finished and edited the book together I waved it off to print and didn’t see it until the day of launch which was a strange new experience!

AP2HYC: The artwork in this book is reminiscent of children’s books, is that because you’re targeting it at younger readers or is there another reason?

Hathaway: It’s interesting you say that, as I wouldn’t say Cosmos is a story for younger readers at all – much the opposite. The themes are pretty subtle but deal with fairly adult themes; losing a child, living alone, and missing a loved one, as well as one story on childhood loneliness. As for the stylistic aspects of my artwork – that’s just how I create my work.

AP2HYC: In my review, I came to a conclusion about what the overall narrative of the piece was, would you say there’s one thing you were trying to say definitively or is it open to interpretation?

Hathaway: I think your review covers what I was hoping to portray pretty well; varying definitions of feeling alone in this great wide world, from the very real to the fantastical imaginations of a child. As I mentioned above, as I started creating Cosmos for my own reasons, and as I progressed through the book, I realised that this is a way of stepping into other people’s lives and becoming more aware of the people around us. As you said, an emotional journey!

Hathaway: At the moment I’m taking a short hiatus from comics whilst I work on some smaller, different projects; I’ve spent the last few years constantly working on comic projects so I promised myself some time to debrief and collect my thoughts. Later in the year I’ll begin working on a much larger story, so you’ll have to keep your eyes peeled for news on that.. But you’ll always be able to find me cropping up in anthologies every so often as I can’t resist getting involved!

We here at AP2HYC love tantalising promises of things to come, and so for that (and being kind enough to give us some of her time) we salute Rozi Hathaway!

Do you want to make us tantalising promises? Sound off in the comments or send us your thoughts on Facebook or Twitter! Do you like tantalizing promises? Check out my twitter and I’ll be happy to make you some!