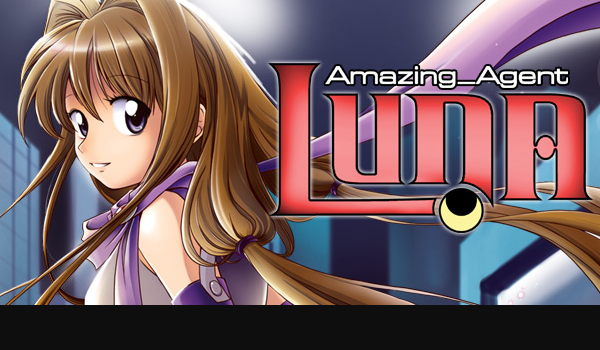 In 2005, Seven Seas Media released the first issue of Amazing Agent Luna, an original English language manga or “Amerimanga” from the minds of husband-and-wife creative duo Nunzio and Christine DeFilippis. The series catalogues the adventures of its titular protagonist Luna Kajiwara-Collins, a genetically bred teenage girl and CIA operative living undercover with whom she believes to be her adoptive parents in an unnamed suburb. When she’s not fighting crime, she’s battling drama at her high school, an elite college preparatory academy for the pampered and proud children of diplomats, dignitaries and oligarchs.

The DeFlilippis’s brainchild would later expand into an eleven-volume long epic that in turn spawned its own spin-off series. With artwork by Shiei, a California-based illustrator and the most prolific amerimangaka in the US, and fast-paced tales of espionage, the comics quickly grew a rabid fan following. This past week, I had a chance to interview its creators via email.

A Place To Hang Your Cape: How did you two come up with the idea of a secret agent school girl? Were you at all influenced by the story ideas you sold to the creators of Kim Possible?

Nunzio DeFilippis: Kim Possible wasn’t a major influence. We were fans of the show, but really got into it more once we’d already started writing Luna. And once we became fans, we asked our agent to look into working on KP. The bigger influence was Buffy The Vampire Slayer. You can see the influences of that show in the main cast – Oliver is heavily influenced by Xander, Elizabeth by Cordelia.

AP2HYC: Why did you chose to make a manga? What about the artistic medium attracted you to it? 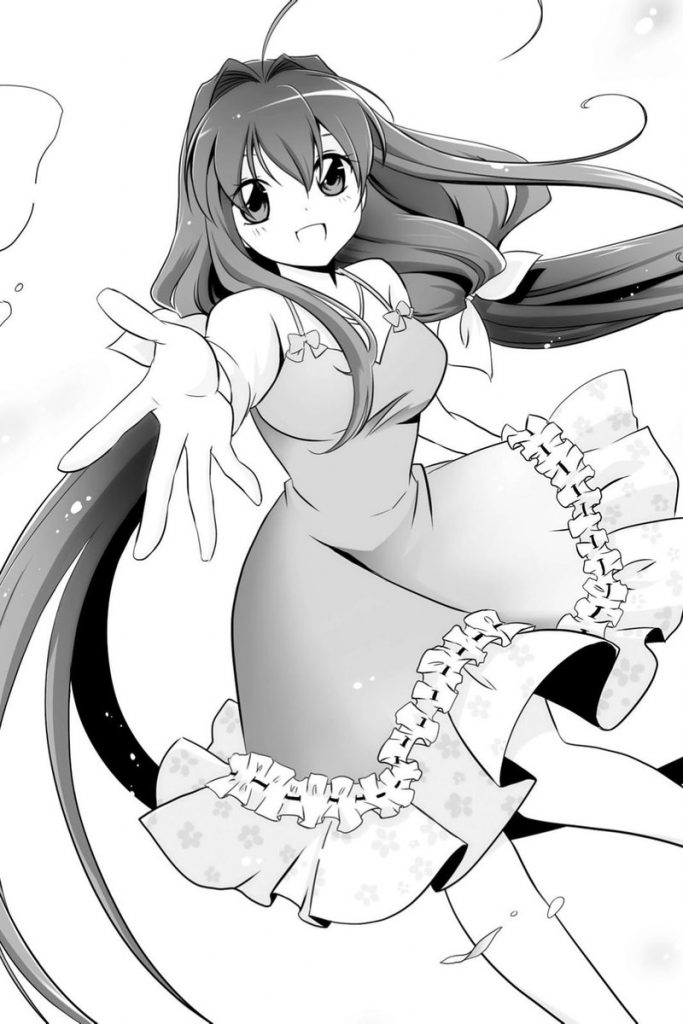 CW: We started working in manga doing localization of Japanese manga for publishers like Del Rey. Nunzio had read manga before we got that job, and I started reading it when we got that job. And we both wrote comics, so it seemed like a natural fit for us. Manga is open to a wider range of story ideas than most American comics, so we loved the idea of being able to tell any story we wanted in that form.

AP2HYC: You published Volume 1 in 2005 and finished the series two years ago, in 2015. What was the creative process like? Why did it take so long? 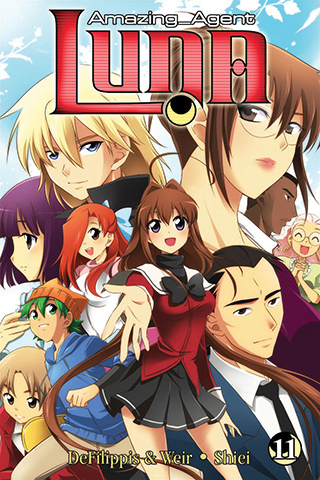 CW: The creative process was like a lot of out work – Nunzio paces and talks a lot, and I work the keyboard, putting what we discuss into the script. With other projects, as we got busier, we’d take turns – one of us would write the first draft of a chapter, and the other would do a rewrite, and then we’d work together on a third pass and any other needed revisions. And certain chapters of Luna might have been done that way, too. But we mostly tried to stick with the working together on everything method. It’s much more satisfying, and a huge part of how we worked on Luna at the start.

ND: In a lot of our comics work, we wrote comic formatted scripts, where we specified what was in each panel. But for Luna, we wrote screenplay format, and let the pacing of the scenes and pages fall to Shiei.

AP2HYC: Much of Amazing Agent Luna revolves around Luna’s struggle with her own identity as both a possible clone and a tool of the government. In fact, she came off to me as a bit of a cheery version of Lucy from Kazuo ishiguro‘s 2005 novel Never Let Me Go. Though her situation is one-of-a-kind, she handles it in a very angsty way being that she’s also the adopted teenage daughter of a mixed race, unwed semi-couple. Did you mean for her struggle to be an allegory for a specific trial associated with growing up? 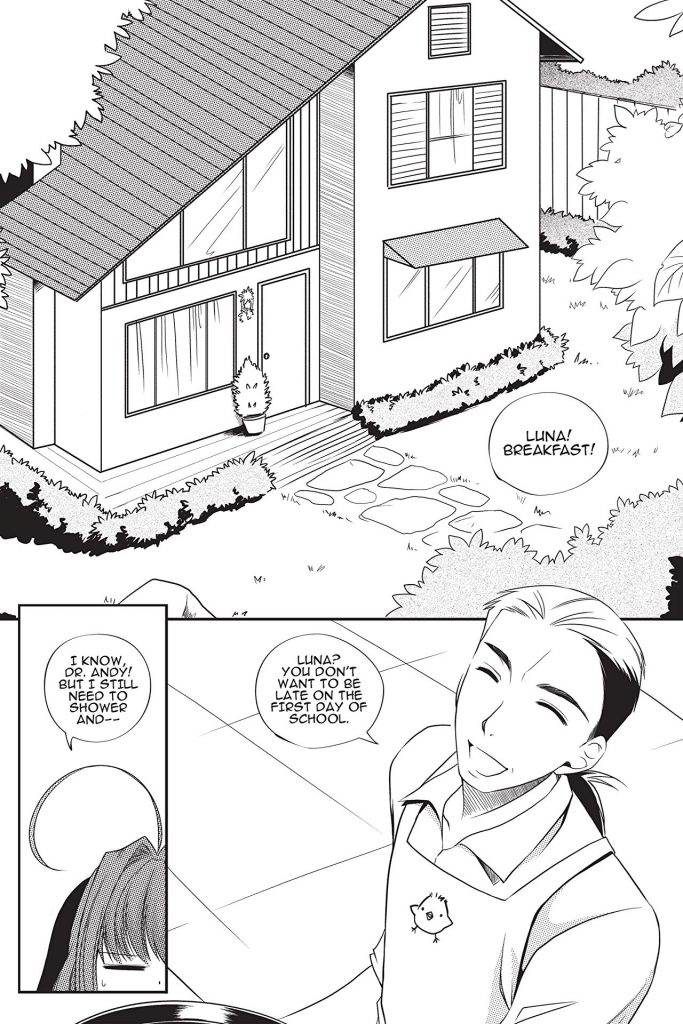 CW: Being a teenager is sometimes about figuring out who you are and what kind of person you want to be. And there are some parents who try to start you down very specific paths when you’re young, creating some conflict in those teen years.  We wanted to amplify that as much as we could. Luna was told from her genetic design through her training exactly who she was going to be. And yet, who she would be as a person, interacting with other people, was left completely blank. By building her story this way, we got to write about a teenager who really knows nothing about herself, but also write about a teenager very actively learning to rebel against the plans laid out in front of her.

AP2HYC: What are the benefits to working as husband-wife team? Cons?

ND: The main benefit is that we can share everything. There’s never that feeling that your spouse doesn’t get what you’re going through at work, or that we have a portion of our lives carved out away from one another. Another benefit shows up in the writing itself. Every page we finish is not a first draft, but a third, sometimes a fourth or fifth draft. We hone each other’s skills by being a first sounding board for every idea out of each other’s heads.

CW: The downside is that most of our fights as a couple are about the writing. We don’t fight at all about money or how the home is run. And we rarely fight about family or friends. We fight about story and character. We made a rule, when we started working together. No caving in – no page or scene or line where one of us says “fine, do it your way.”  We HAVE to talk it through, and agree. That often means we throw out both of our ideas, and find a third way whenever we disagree. But it also sometimes means the debates about those scenes or lines can last a while, and sometimes that means they turn into genuine arguments.

AP2HYC: Are you working on any upcoming projects?

ND: Right now, we’ve got Dragon Age: Knight Errant for Dark Horse. The second issue came out already, and we’re done with our role as writers. But we’re hoping to do more work in the Dragon Age universe after this miniseries.

CW: And we’re working on a novel. There’s been a much delayed rewrite (delayed by the Dragon Age miniseries and also by our jobs as teachers) that we need to finish for our agent.