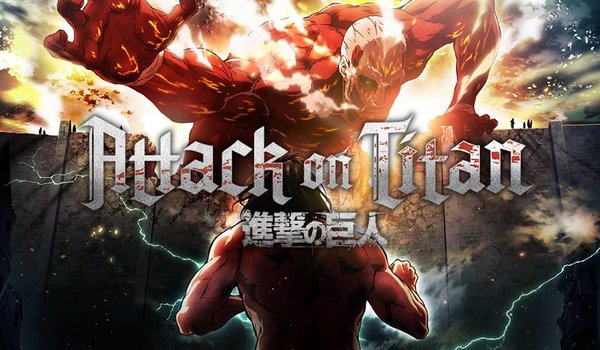 The second season of Attack on Titan purely rocks! That has to be said straight away. Though only consisting of twelve episodes, the season takes every opportunity to deliver the virulent, dramatic storytelling of the manga created by Hajime Isayama. Just about each episode feels like a runaway train about to slam into a mountain, and throws a dozen or so plot twists at the word go. The five year wait for the second season was worth it, but there are still some problems as the season juggles what was established before and what needs to be answered.

Now, from this point on we are going into major spoilers for the entire second season, so if you don’t wish to find out the secrets of Attack on Titan, then only read on at your own risk.

As a reminder, the story of Attack on Titan is based around humanity’s survival from monstrous, man-eating giants called Titans, escaping behind three huge walls and lived for a century in peace. That all changed when the Colossal Titan and Armoured Titan kicked holes in the walls, letting the frightening Titans invade, leading to a war for survival. Our main protagonist, the eternally angry Eren Yeager, his overprotective adopted sister Mikasa Ackerman, and their mop-headed friend Armin Arlert, join the military in order to slay Titans and avenge their loved ones. To kill Titans, the soldiers use mechanical manoeuvring gear to get around Spider-Man style, and slice the Titans’ napes. Beyond that, just about everything in the plot is a major spoiler or plot twist.

The first season ended on a bittersweet note, with the second season kicking off right after. However, because of the episode limit, story elements set up at the end of the first season are put to one side or unresolved. Our main characters take a back seat for the first half of the season, and we instead focus and flesh out the supporting characters. Several new mysteries surface and the stakes rise exponentially. While Eren and co. spend the first few episodes doing little, the supporting cast are thrown in the deep end when they learn that Titans have apparently breached Wall Rose, and the race is on to prevent a second invasion and warn surrounding villages of the danger. However, many secrets, related to the characters and the larger world sprout, answering some questions and creating new ones.

The world and characters of Attack on Titan are complex and have many layers. Thus, there are many questions left at the end of the first season. Like, where do the Titans come from? Why do they eat humans? How does one become a Titan Shifter? What are the secrets of Eren’s basement (though that one remains a mystery and doesn’t get resolved)? Everyone in the cast are in a way hiding their true selves, some more literally than others. And the reveals come as one shock after another. Admittedly, I knew what was going to happen since I had been reading the manga during the long wait for the anime to continue, but don’t fear, spoilers for the manga unrevealed in the anime shall remain unspoilt.

The first episode immediately focused on the reveal that Titans were hidden within the three great walls that protect humanity. However, the story quickly abandons it to focus elsewhere, but does provide some thought-provoking horror should those Titans in the walls all wake up. It pretty much gets forgotten by the time we reach the season finale. Anyway, the most engaging stuff comes in the first episode, with the introduction of the sinister Beast Titan, implied to be a Titan Shifter like Eren. He speaks English and shows an interest in the manoeuvring gear of the military. His presence is quite impactful, in a literal sense when he starts throwing horses around, but then he all but vanishes from the plot until a brief cameo in the finale’s closing seconds.

One major reveal of the story that was heavily implied was the confirmation that the Titans are in fact humans, trapped in Titan form against their will and powerless over their own actions. This brings about a much more darker and tragic characterisation to the titular monsters of the series, and leaves our troubled heroes questioning their own actions and morals. Would you be able to kill a cannibalistic monster knowing it was really a powerless human?

As said before, a lot of this season’s focus is on the supporting protagonists. Krista Lenz and the abrasive Ymir have had a weird relationship, with Ymir always acting quite snarky and belittling towards others. However, she becomes perhaps the most developed character in the season, though here motivations are extremely confusing by the finale. It becomes clear that Ymir was drawn to Krista upon learning her origins are actually quite regal. Krista’s motivations also become clear, apparently stylising herself as a good-two-shoes to hide the fact she is a death seeker, and willing to risk her life for the sake of others so it may mean something, even if she dies a martyr.

When Ymir’s backstory and secrets are revealed, it definitely places her in a new light. Her entire life has basically been out of her control, and in a brief moment where she tries to make a decision for herself, for the sake of others, it backfires on everyone. Her peculiar but adorable fixation on Krista drives her for the whole series, putting her into conflict between whether or not she should live for others, or just for one person, namely herself and Krista. Admittedly, her motivations are a little hard to follow at times, but I suppose that adds to what makes Ymir such a compelling character.

But, by far, the best moment of the whole series comes in the sixth episode, where the identities of the iconic Colossal and Armoured Titans are revealed. And, perhaps, in the most unusual way possible. The big reveal is played out in a minor, little announcement with no attempt at being melodramatic or having a “dun-dun-dunn!” moment. Eren’s stunned “wait, what” reaction basically sums up how everyone has reacted as seen via numerous YouTube reaction videos, with many jaw drops, double takes, and moments of utter shock. Granted, I knew it was coming about two years in advance, but the way it is handled just made the heartbreaking revelation all the more epic.

The one downside is that moments after the big twist occurs, it is shown in flashback that all of the heroes were actually already in one it, though their genuine shock still makes the scene so amazing, and definitely one of the highlights of the whole series.

Attack on Titan still relies on heavy-handed, grotesque, and tragic horror to unnerve audiences. The Titans still remain as freaky as ever, with their deformed appearances becoming even more disturbing. The first episode features one Titan who is shambling into view, then suddenly he flips out and charges into battle like he is doing some messed up version of the Harlem Shake. It is both funny and uncomfortable at the same time. It is always horrific whenever a character, no matter how minor is eaten. During a signature battle against Titans at an old castle, several veteran members of the military get devoured, one crying into insanity when he is denied a simple drink of wine, and another is drawn and quartered by monster, who, for her, symbolise her implied abusive childhood judging by her hysterical screams and apologies to her father.

The finale feels more like a set up for the third season, which is reportedly coming out next year, though it certainly ends this round on the rollercoaster to a thrilling end. Attack on Titan still remains one of the most exciting anime in recent years, and I feel more comfortable with it being a shorter season, leaving you wanting more each week, shaking your senses and mind blown factor to their core. However, the anime is now catching up with the manga, so whether or not it will dive into filler or new stories to make time remains to be seen.

What are your thoughts on the second season of Attack on Titan? Is it better or worse than the first? Leave a comment below or on our Twitter feed.