Home » Batman and Harley Quinn Is All Laughs But Little Plot 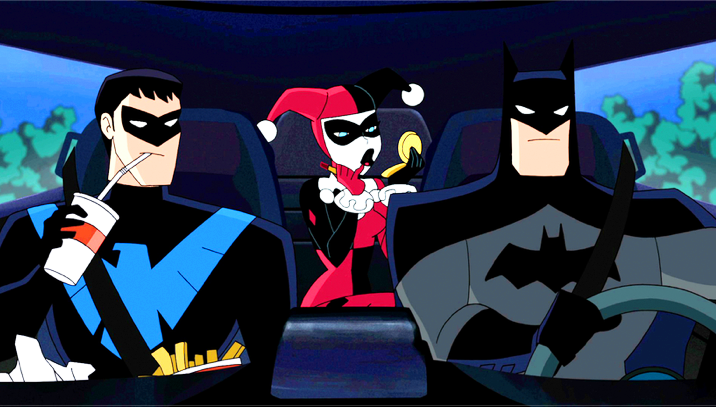 Last year, as well all know, what a bad year for Batman movies. The Dark Knight had sex with his own sidekick, the Joker was somehow made boring (how is that even possible?), and of course, “MARTHA!”. The trilogy of Batman v. Superman, The Killing Joke and Suicide Squad make the Schumacher films look like masterpieces, though Suicide Squad does have some redeeming parts, namely Margot Robbie as Harley Quinn. Speaking of everyone’s favourite henchwoman, Harley is the subject of the latest animated Batman movie, Batman and Harley Quinn. Co-written by Bruce Timm, the film is a little hard to describe. It is like being Rickrolled for eighty minutes, a bizarre and yet hilarious film that uses the same animation style as Batman the Animated Series, but lacks an interesting plot.

The best way I can describe it is that it feels like an apology for The Killing Joke, with the decision made to have nothing but laughs and wacky shenanigans, and zero drama at all beyond the occasional bit of conversation. Kevin Conroy and Loren Lester return as Batman and Nightwing, and are more than welcome. Melissa Rauch voices Harley Quinn and does a favourable job as the character, working well with the humour, and provides most of the laughs in the film.

To the story, or at least what was scraped together to tie things together. The movie feels like a stretched out version of the BTAS episode “Harlequinade”, where Batman teams up with Harley to stop the Joker from nuking Gotham. However, in this case, Harley is on the straight and narrow, and it is Poison Ivy (Paget Brewster) and Floronic Man (Kevin Michael Richardson) who hope to turn humans into plant people using a chemical formula connected to Swamp Thing. Or something like that; the film doesn’t really care about telling an interesting end of the world drama and more on the road trip between Batman, Nightwing, and Harley.

There are many problems with the film, from the pacing, padding, the on-and-off success rate of the comedy, and the really, really unnecessary fanservice and mild sexism. The first half of the film seems dedicated to topping The Killing Joke. Nightwing stumbles across a restaurant called “Super Babes” where all of the waitresses dress up as a sexy superheroines in skimpy outfits, and serve as eye candy for the completely male visitors! Then, after he finds Harley and gets his ass handed to him in the only good fight scene in the film, Harley ties him to her bed, turns the lights out, and by the time Batman arrives, it is implied that Nightwing and Harley have had some hanky panky. The whole thing is played for laughs. I guess the film doesn’t really want to take itself too seriously.

The film dedicates itself to one gag after another will little character development or growth. Harley is all over the place as a character. Are we supposed to find her sympathetic? One minute she is complaining to Nightwing about how all job offers have consisted of basic sexual harassment which angers, yet she has no problem jumping on the former Boy Wonder. She has the occasional moment of humanity and her relationships with the Bat family and Poison Ivy remain intact and explored a little. Speaking of Batman, he doesn’t really much to do here, though it is a riot seeing him become increasingly exasperated by Harley’s antics. Interestingly, the Joker is only mentioned once, is never seen, nor has any impact on Harley’s behaviour.

I think the biggest, or the strangest element of the film is the padding. This film was written by Bruce Timm, so why is there a complete lack of compelling drama? Did they just think of funny things they could do with Harley and then wrapped Ivy’s plot around what worked.

Batman, Nightwing, and Harley go to find potential sources for where Ivy and Floronic Man have gone. After some fart jokes, the trio visit a nightclub for henchmen in Bludhaven and the film, for better or for worse, grinds to a halt so we can go through two musical numbers: A rather impressive “duet” by Rob Paulsen as the freckled twin minions of Two-Face, and then a decent karaoke attempt by Harley so she can get info from a weird-looking dude named Shrubby. And, meanwhile, Batman and Nightwing are left standing at the back until needed again. I had half expected Batman to get fed up and starting poking eyes out to get answers, and it is only after the singing ends that it looks like we’re about to get a bar brawl, only for it to cut outside, and pays tribute to the 60s Batman series via the traditional sound effect visuals.

The ending also feels like a bit of a cop out, like again, they just ran out of ideas or had none to begin with and threw things at the wall til they stuck. And yet, for all of the problems, I did enjoy the film – perhaps just out of joy at having something a bit more fun after last years debacle. Bruce Timm cameos as Booster Gold calling Batman and offering to bring backup from a number of minor Justice League members that Nightwing silently insults. The nightclub scene also offers a few humourous cameos from minions seen in BTAS, including Captain Clown!

Perhaps the film was made not to create another dark Batman story, but just to have some fun which had a heavy present in the 1990s animated series. And admittedly, I am getting a little bored of moody, gritty Batman stories. Some fun is welcome. I have yet to watch The Lego Batman Movie, which I have heard good things about, and Wonder Woman has proven there is potential in these DC movies. Batman and Harley Quinn is an average but goofy movie at best and a fun ride to sit through if you don’t mind Batman being a little laidback and less brooding for once.

Have you watched Batman and Harley Quinn? What were your thoughts on it? Leave a comment below or on our Twitter feed.