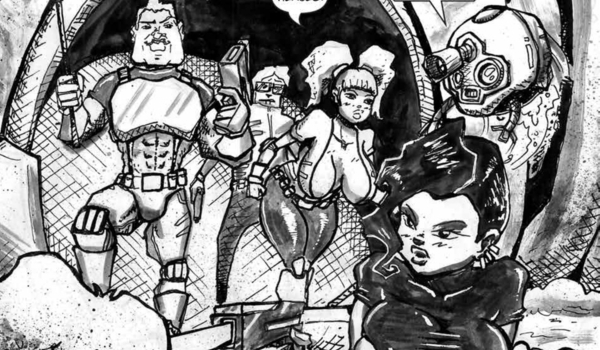 The Revisionaries is a rather interesting read that answers the age old question: would you use a time machine to go back and kill Adolf Hitler? A trivial dilemma that ends with comedic (and very violent) results, especially when the team setting out on this task aren’t the smartest (or have much common sense either). We were lucky enough to pitch some questions to the series writer, Andrew Adams, and the series artist Nico Sucio, as they discuss the past, the present, and the future of the series…

AP2HYC: How did you two come to collaborate on this series?

Adams: I had started to develop The Revisionaries for another artist long before I’d ever met Nico, but the project fell apart when the artist developed some health issues. I moved onto a dark fantasy called Schismatic (officially my first comic project, with Rachel Briner), but it always bothered me that I had a script that I loved lying untouched and unread in some computer folder. So I eventually put up a posting on the DeviantArt forums, seeking an artist to collaborate with.

Of the hundreds of submissions I received, there were four artists whose styles I thought might fit. I sent each of them a five-page sample of the script, a synopsis, and $50… And then asked for however much art that was worth to them, as an audition. Everyone was talented but nobody could capture the tone and energy quite like Nico. Out of hundreds of submissions, I knew he was the guy.

AP2HYC: Where did the initial idea for the series come from?

I had the basic idea many years ago. Inspired, partially, by a weird amusement park in Virginia that depicts the Civil War as if there had been dinosaurs in the armies. I have absolutely no idea why this park exists. I haven’t even been there. But I had a crush on a girl who posted a photo of it on social media, and it sparked a ton of ideas about time travel.

But for many years, I felt like the core concept was too cliché to pursue, so I tried to put it to bed… Except that it wouldn’t go away. The idea kept gnawing at me, and more twists and turns started to form. Until eventually, after years of fermentation, the idea felt like it had blossomed into something special and unique. And that’s when I started writing.

AP2HYC: What were your influences on this series & its style?

Sucio: My big influences are the underground fantasy and Sci-fi artists from the 70s and 80s (Heavy Metal magazine, for example, and some Spanish publications that reached Argentina in the 90s like Cimoc, Zona 84, etc.). I’ve read them since I was eight years old, so that’s how I always felt comics should be. It mostly influences the attitude of the comics: no strings at all and trying to do some new and crazy styles.

My drawing style has evolved as I experiment more and more, but I’ve learned a lot from three specific artists: John Kricfalusi, Sam Kieth, and Ryuusuke Mita. There are some other big influences, but those guys are my holy trinity.

Adams: I grew up loving Steven Spielberg movies (Indiana Jones, Jurassic Park) and horror. Especially horror comedies (like Shaun of the Dead) or splatterfests (Evil Dead, Dead Alive). And this series sometimes feels like I just stirred all of those ingredients into one single pot and let my mind run wild. It’s basically just a full-length version of the kitchen slaughter scene from Gremlins, but with dinosaurs and Nazis instead of little green monsters. And also some hard physics from Michio Kaku and Brian Greene.

Almost all my favourite comics are written by Brian K. Vaughan, Matt Fraction, or Jonathan Hickman. And a lot of the storytelling style in The Revisionaries – from the panelling to the page flips to the cliffhangers – is borrowed straight from them.

AP2HYC: Have you two worked together before?

Adams: No, but I hope this is the first of many! I think that I have a pretty specific writing style, which takes over-the-top, absurd ideas and dumb jokes but then tries to ground them in real character growth, hard sci-fi logic, and genuine emotional/dramatic stakes. And to balance so many tones and ideas is tough. But Nico’s style combines with my own really, really well. Everything he draws is raw and full of dark, gritty energy (which makes all the action and horror shine), but it’s also cartoonish enough to let the comedy pop. I’ve seen other artists try to draw my comedy work and it never seems to work as well as when it’s put through the Nico filter.

Sucio: Andrew’s appreciation for my work is truly encouraging, and I’m definitely hoping to have more opportunities to work with him in the future.

AP2HYC: Who is your favourite character in The Revisionaries so far?

Sucio: Cecily, without doubt. I love her design and her attitude.

Adams: Agreed! The Revisionaries as a whole tend to be so dumb that they’re all fun to write… But Cecily is the only voice of reason. And the most badass. And the most rebellious. Everything about her is just the best. Everything. Cecily is and forever will be my favourite. Hands down. Next question.

AP2HYC: Was ther any part of the development process that you couldn’t quite agree on?

Sucio: I don’t think so: I’m very respectful to the fact that this world and it’s characters are Andrew’s creation. He had the idea for everything and I stick to my part, instead of trying to make my own view of it.

Adams: I’ve learned that I really like collaborating with artists early on in the writing process, because if I can tailor my stories to an artist’s strengths and interests then I think it makes the best product in the end. But since I started this project with very little published writing under my belt, I thought I had to finish the scripts in advance in order to show any potential collaborators (Like Nico!) that they could trust me. And that limited our ability to create the world together. Although I am revising the script to suit his strengths.

If we do any follow-ups or sequels then I’d love to bring him into the story-building process much, much earlier.

Sucio: But I have lots of creative freedom, and Andrew is super open-minded. I can reach out to him with crazy ideas that he almost always accept enthusiastically. Except when I come out with stuff like adding a farting butt-shaped chin on a screaming guy… But what sane person would accept that?

Adams: That’s not an exaggeration. That drawing’s still scarred onto my retinas. The only conversation we seem to have over and over is: “Are we pushing this too far?” But the answer is usually no.

Sucio: We try to remember that the first idea isn’t always the best one. Since the final result is a collaborative piece, we’re always striving to reach a point where whatever Andrew wants to transmit with his writing and whatever I want to transmit with my illustrations can flow together and work as one, instead of closing ourselves in on absolutes.

Adams: I have a simple guiding principle when it comes to creating art: the best idea goes in, no matter who came up with it.

AP2HYC: What is next for The Revisionaries?

Adams: The Revisionaries is designed to be a self-contained six-issue story. Originally we’d been releasing the print issues one-by-one via Kickstarter, but we actually launched a new website (www.revisionariescomic.com) where we’ll be sharing new The Revisionaries pages every Monday, as a free web comic. Because we’re really proud of it, and we want to share it with as many people as possible!!!

Sucio: Of course I would love it if this turns out being a huge world with movies, toys, and more. It’s every creator’s dream! But thinking about it, it seems unnecessary to me, since it doesn’t add anything to this moment. I prefer to stay alert to what’s happening now, enjoying the moment of active creation and trying to do it better every time.

Adams: And even though Issue Six ends with a pretty definitive finale and as few loose ends as possible, I think we’ve both fallen in love with these characters and this world. Which naturally lends itself to imagining further adventures and sequels. But we’re not focusing on that now. We’ve got a story to finish!!!

Sucio: I would love to expand the universe if the miniseries goes well. But most important is to stay alert to what’s going on right now, to enjoy ourselves, and to try to make honest, original, and high-quality work.

AP2HYC: Do either of you have any future projects in the works that you’d like to discuss?

Sucio: I believe that the future project is to get the miniseries done, reach people, and then plan our next move. Of course we have separate projects with other people on our own, since we both manage to live out of our art.

Adams: I’m wrapping up the final issue of my other comic mini-series, Schismatic. But I also make a living working in film. That usually means creating commercials and branded content, interspersed with whatever random gigs I can pick up, but I’m also writing a low-budget horror feature that I’d love to some day make. That’s all I can say for now!

We at A Place To Hang Your Cape would like to thank you both for taking the time to entertain our questions and we wish you both the best of luck with the series and your future projects.  Don’t forget to check out the links above to witness the series for yourselves and show some appreciation for the bizarre and amazing world they have created.

What is stopping you from checking out The Revisionaries? Which character do you find the most relatable? Feel free to persue our review of Volume 1 and Volume 2, and sound off in the comments or send us your thoughts on Facebook or Twitter!