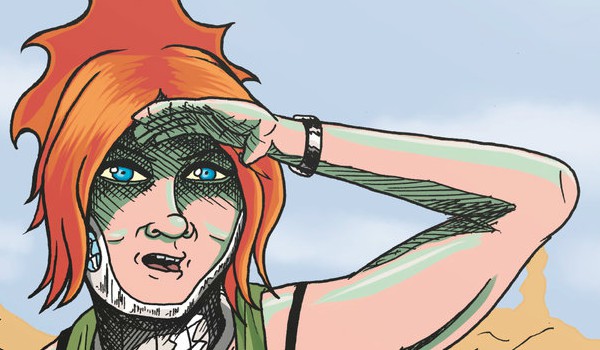 If you were going to live for 5,000 years what would you do? That seems to be the question at the centre of the comic book Wayfarer: Closure but you do not find that out until the very end of the comic book. What should be the most interesting part of this story is thrown in at the end almost as an afterthought.

For most of the story I was confused about what was the point of the story and what was going on.  We are brought into America in the year 2026 and introduced to Abigail who has hired a truck driver to take her across country to a mysterious location. Along the way we learn how things have changed in America and what the state of the country is. Eventually they reach their destination which turns out to be Prescott, Arizona which seems to have been wiped out and we are told it is where the Modern American Civil War started and thousands of people died. Abi then mentions she did not know why it was a good idea to come.

Now at this point I was confused about the situation. She mentions earlier that she was in space when this was going on and wants to see if this could really happen. I was waiting for some other revelation, such as she knew someone who was there, or was involved in the war and wanted to see where it began. But it just felt like a story with no purpose or point to it and then the last page dropped.

In the last page we learn that Abigail will indeed live for 5000 years and the metallic brace she is wearing around her neck is something that allows her to deep space travel. Now while I still have questions, is Abi an alien or a human, and how long has she been on Earth I at least had some much-needed background on the character. This final page really should have been put at the beginning as I would have felt less confused about the story. While I still have questions even after that final page I feel like I have a better handling on the setting and characters. The issues are though the story itself is not all that interesting and with a protagonist like Abi a story with more stakes or that she is more invested in would be of better use for her. Right now she is just a bunch of ideas with nothing to go from that. 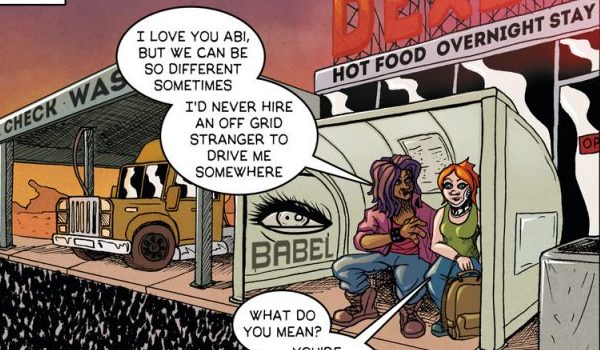 In terms of the artwork it is not the best that I have seen. Designs on faces feel off and there is one panel where it looks like Abi’s head has shrunk and she looks like a goomba from the Super Mario Bros. movie. It seems like it was a rough version and could have used more time to polish and looked better.

Weirdly structured and missing an important emotional connection for the protagonist, Wayfarer comes off as just a meandering and pointless story. Even with the important information on Abi that is given at the end it does not play a big part in the overall story and seems more of an interesting trivia than vital information. Hopefully if Wayfarer is an ongoing series than there will be better stories for Abi to star in.

You can find out more about Wayfarer Closure from the comic’s creator, Richard Rudge. Are you already a fan of the comic? Let us know in the comments section below or send us a Tweet!