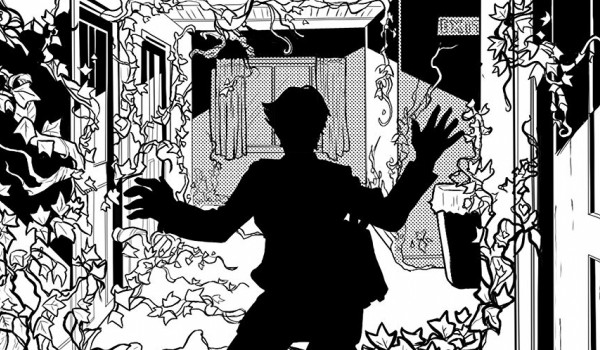 It’s no secret that Comichaus is rapidly becoming my favourite indie comics anthology on the market today. The worlds and characters it boasts are manic, devilish creations and its execution has a punk-like snarl to it. So far however, with that attitude comes a level of uneasiness. Not every strip in Comichaus has won me over, but that’s the nature of an anthology. Since Issue #1, some strips have teased rather than told their stories, whilst others tell too much and show too little. On the surface, Comichaus Issue #3 has the same setbacks, but on closer inspection there’s a genuine sense of flourish to the issue, like we’re blossoming towards something truly awesome.

Issue #3 closes the book on some of the anthology’s ongoing strips whilst beginning fresh adventures. Given that we’re only three issues into Comichaus and that Issue #8 is now on sale (I know, aren’t I terribly behind on my reviews?) one certainly can’t argue that these strips don’t outstay their welcome, but James Mcculoch and Jessica L. Byrne‘s Karyn Shade, the strip that kicked off Comichaus‘ first issue, feels as though we’ve barely welcomed here at all. This third issue brings wise-ass detective Karyn’s mis-adventures in discovering, and apprehending, a cult ritual to a conclusion that feels undeveloped. Karyn’s swearing attitude is a fine fit for Comichaus‘ punk tenancies, but since Issue #1, she’s been accidentally falling into the story and accidentally resolving it, which doesn’t make for satisfactory reading. Her strip ends with a tease for future adventures, cementing a weak introduction to the character, but a solid enough introduction to her world.

Elsewhere, Card Shark Comics‘ Feathers and Aaron Walther‘s Troubleshooters continue their reign as Comichaus‘ strongest adventures, both widening the gulf between our heroes and villains in their respective premises. Feathers’ depiction of an apocalyptic future for mankind driven by an outbreak of a bird-related disease continues to be executed in a charmingly intimate manner, as rapidly estranged husband and wife Doug and Sally continue their descent into their disastrous lives in a wonderfully engrossing manner. The jumping ahead in time involving Sally becoming some vigilante in the near-destroyed future was something I found awkward back in Issue 2, but here it feels much more natural and adds to the respective development of both Sally and Doug especially since we bear witness to Doug’s own destiny in the story’s future.

Feather‘s artwork has an intoxicating roughness to it that melts its normally present and apocalyptic future world together. Norrie Miller‘s curious choice of art style might not be an effective choice, due to its moulding of two vastly different worlds, but much like the story’s sense of progression, this type of visual style grows stronger with each of Feather‘s instalments.

Working in tandem with these ever-evolving strengths are Steve Horry‘s Chalk and James Calderbanks‘ “The Return”, two fresh-faced strips that promise at exciting times for Comichaus. A solemn retelling of the Apollo 13 mission, The Return is an eerie, cryptic bit of alternate history, but it’s “Chalk” that has the makings of a Comichaus classic. In six short pages, each bursting with the rough enthusiasm Comichaus specialises in, we’re given a snapshot fusion of slice-of-life fantasy/mystery/adventure in which a series of odd suicides forces Jacqueline into adventure. Inked by Horry and pencilled by Catia Fatina, Chalk‘s artwork has a crisp precision to it that adds to its immediacy.

Chalk exemplifies what I’m loving about Comichaus, it’s a blistering, genre-splitting shot in the arm that shows us the basics of the strip’s premise but injects enough mystery to make us want more. I hope Chalk evolves into something awesome, because this in-your-face mentality is what makes Comichaus such an entertaining ride. By now, I think this comic has demonstrated that such a mentality is the way forward in crafting winning strips, meaning that I’m more excited than ever to see what the future holds for Comichaus.

Have you caught up with your Comichaus yet? You can get your hands on Issue #3, as well as past and present issues of Comichaus, from Comichaus‘ website.