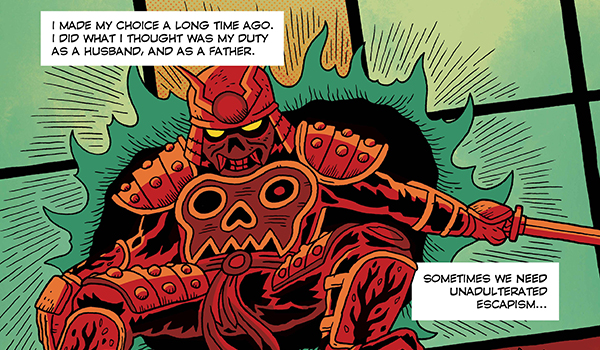 Mike Garley has written some crazy comics. There. I said it.

But Late Fees is something very different from its Samurai Slasher cousins. In fact, I’m not sure they even belong in the same category.

Set over several decades, the book opens with the story of a boy renting videos with his father, who introduces his son to horror with the Samurai Slasher films. The boy then discovers that he has the power to become the Samurai and fight off the monsters and demons that come into his life – or is it just a fantasy that gives him strength to face the crises that come his way? The real world starts to blend with metaphors as life comes crashing down on the Samurai, who must overcome his demons in a journey to find peace. 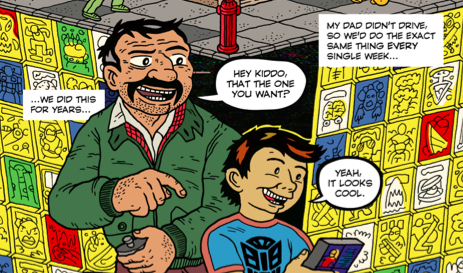 The story is much more touching than I expected, and is certainly a more personal tale than the previous Samurai Slasher books. It demonstrates the wide range of topics that can be covered not only by the Samurai Slasher character, but also by comics in general. I went in expecting just another wild slasher adventure. Instead, I got a story about fathers and sons, and the power of escapism.

While Garley himself said in an interview with Pipedream Comics that the Samurai could have been replaced with a number of 80s horror icons, I’m not so convinced. I think the metaphor is made that much stronger because it is Garley’s own character. Considering the personal nature of the story, it feels fitting that Garley uses his own character to explore these themes.

All of this isn’t to say that the book is devoid of action. In truth, it has some great action panels, drawn magnificently by Lukasz Kowalczuk with colours and letters by Lukasz Mazur. The art style is very evocative of the 80s, cartoony without being too childish. The colour palette is simple, bold, and put to good use. The action scenes are all fun and lighten the tone of the story. 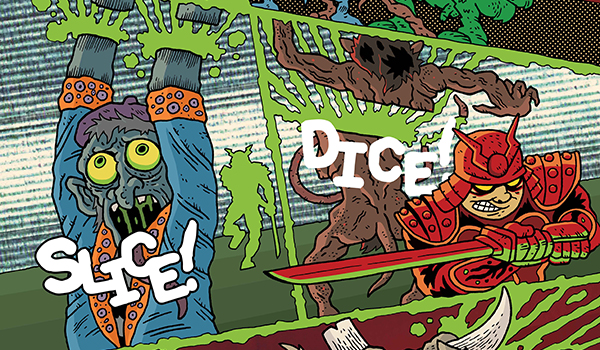 The demons that the Samurai faces are fun mash-ups of 80s culture, reminiscent of Teenage Mutant Ninja Turtles or Where The Wild Things Are. I also liked the panels showing the protagonist’s transformation into the Samurai, again simple yet effective. But the real success of the artwork is that it helps keep the story from ever feeling cheesy or heavy-handed.

Late Fees is a unique exploration of the nature of escapism, set against the bloody backdrop of 80s horror. Fans of Garley’s previous work will love this latest piece, even if it may not be exactly what they expect.

Samurai Slasher: Late Fees will launch at Orbital Comics on September 8th from 16:00-19:00. Head over to get a signed copy from Garley and Kowalczuk. The comic is only getting a limited run of 666 copies and will also be available at Garley’s Big Cartel store.