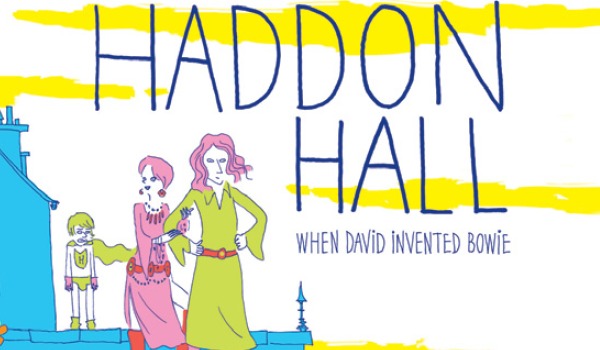 David Bowie has had more biographies published since his untimely death in 2014 than other artists receive in their entire lifetime. They seemed to flood the bookshops mere weeks after his passing. This is perhaps an inevitable reaction to the death of someone with Bowie’s stature. If anything such a reaction shows what a impact Bowie himself made on audiences during his life time. The problem this presents however is where does the average Bowie fan begin with this gluttonous amount of biographies to choose from?

Whichever one they choose, Nejib‘s Haddon Hall: When David Invented Bowie is heartily recommend along the way. This is a comic with all the charm and none of the seediness from one of the most charmingly seedy careers in pop music. Bowie’s career was defined by his chameleon-like ability to reinvent himself, but with that finger on pop’s pulse came its excesses. The runaway success of Ziggy Stardust and it’s ensuing, spiralling drug-related outcomes for Bowie is as remembered as Ziggy’s impact on popular culture itself.

Nejib‘s depiction of this pre-Ziggy Bowie however is an effortless capturing of a very innocent time in Bowie’s career. Before Ziggy, and even before Bowie, there was simply David Jones, a young wannabe superstar who opts to move into a dilapidated Victorian mansion in an attempt to kickstart his career for what was then the umpteenth time. It’s here that Nejib begins his story, and uses the house itself as a quiet, nonjudgmental narrator of the comic. That tactic alone emphasises the whimsical nature of Haddon Hall: When David Invented Bowie, itself highlighting how charmingly spry this era for Bowie was.

The entrancing nature of the comic is galvanised by the artwork, a post-psychedelic rainbow that has all the energy but none of the danger of that period. Nejib illustrates Bowie, the Spiders from Mars, Marc Bolan, then-wife Angie, Tony Visconti, Tony Defries, John Lennon and more in a frantic, sketch-like manner with little regard for conventional panelling. On first viewing, it takes a while to adjust to Nejib’s loose interpretations of these players, especially when at time they appear is if they’re spilling out of their own bodies, but his generous use colours make Haddon Hall: When David Invented Bowie an alluring comic to experience visually.

Haddon Hall: When David Invented Bowie always feels as if it’s on the edge of emphasising its own style over the substance of the story it’s telling, but it’s got a real skip in its step. No moment, scene or day is lingered on for too long, enabling the comic to cover the breadth of ground that Bowie himself covered during this time. Casually, yet purposefully, we journey through Bowie’s frustrations as he pushes Space Oddity away from him and discovers bands like The Stooges and partners with guitarist Mick Ronson, who’d soon become the Keith Richards to Bowie’s Mick Jagger. It’s all executed with a tropical glow that only makes the innocence factor resonate still further.

Haddon Hall: When David Invented Bowie can be bought via SelfMadeHero. Have you already read the comic? Let us know in the comments section below or send us a Tweet!