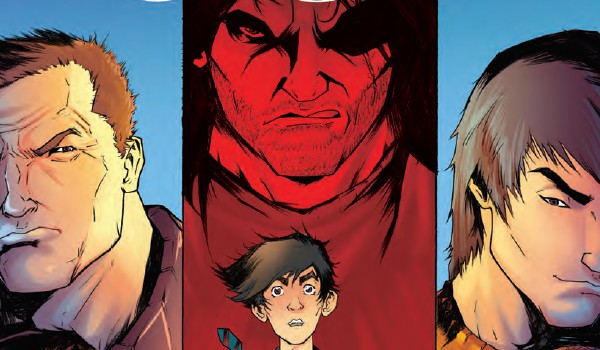 This is a read that reminded me of an important life lesson I had clearly forgotten – don’t judge a book by its cover! At first glance, I completely misjudged Infinite7‘s story. The tag line at the top tells me it’s about super spies so my brain didn’t need to use any imagination to work out the sort of story I was letting myself in for, and the teenage boy in centre position straight away makes my mind drift back to Anthony Horowitz‘s Stormbreaker book series. So already straight away I’m expecting something very similar to those plot lines, or perhaps even Charlie Higson‘s Young Bond series seeing as we even have a not-so-subtle 007 symbol blended into the comic title. Overall, at this stage, I’m feeling a little underwhelmed with a sense of feeling the cover is over-doing the super spy angle already. Then, I started reading. I owe Dave Dwonch, Arturo Mesa and Geraldo Filho a massive apology for my initial presumptions because this story was fantastic and had me hooked early on.

I was expecting to find myself embroiled in some sort of James Bond plot but instead, I find myself in a world of Assassins, Secret Governments and even Magic/Supernatural forces. Rather than some smooth Teen spy, I find myself following Tony, a typical normal teen that due to an accident finds himself suddenly faced with an ultimatum – be an assassin, or die. I think we can all understand him not choosing the death option! What was most impressive in the writing is how they use Tony experiencing an overwhelming, unknown way of life to their advantage – introducing us to monster and villains with insane powers without feeling a need to go into a massive back story; instead we are faced with knowing as little as Tony does which really helps to draw you more into the insanity that is his new world.

The additional benefit of this style of writing is there is so much content yet to be explained you find yourself wanting more of the story to read to find out more. Who are the Infinite 7, the group of super assassins? How did each of them come to be part of Infinite 7? Who do they answer to? What was with that giant goblin-like bug? Infinite7 grabs your curiosity and doesn’t let go all the way through. 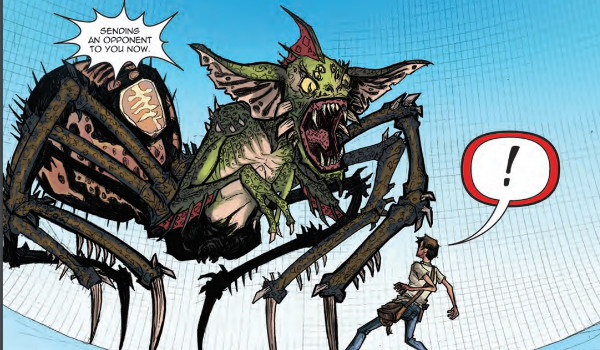 That’s not to say, there aren’t some critiques I could give. Firstly, there is a major twist revelation that truth be told isn’t that big a revelation – it was a bit cliché and I had already guessed it at an earlier part of the story. However whilst I can fault the execution for not being more subtle, I have to say the repercussions of It make it a worthwhile twist. In one moment, character relationship dynamics are skewed and strained. They were already quite complex with allies having grudges against allies, but the level of complexity this one twist creates really dissolves the cliché barrier of “good guys” and “bad guys” that you would typically expect in a clandestine plot such as this.

I’m also fascinated to see where the Melanie storyline goes. This is a teenage girl, curious as to the sudden disappearance of Tony, and vows to find out what’s happened. In my head, this is a story arc I struggle to see go far. A Teenage girl, with no skills or contacts that we are currently aware of, is going to track down a Teenager taken by a secret organisation which has a load of hi-tech equipment and are capable of covering their tracks? To me, it seems a non-starter. However Infinite7 has given me this feeling that nothing is done without purpose and I’m very curious to see how this plays out – I have a feeling I might be pleasantly surprised by Melanie’s antics!

The artwork is incredible. Vibrancy is great with colour cleverly used to captivate you in the details, especially in the fight scenes. Characters are fantastically and realistically drawn – Female Assassins genuinely look like they someone you would be scared to annoy! The only thing that did stand out is given the “mature reader” label on the comic front, I was expecting to see more Gore or blood stains in some of the big all-out fight scenes. Instead, it seems to have been played down in parts. As such the mature reader label seems to mainly be a warning for character language in a few select places and just the dark nature of the storyline. It does feel a little shame not to have the artwork match the story in the level of mature content.

Overall, I beg you all not to let my very minor critiques put you off! I wouldn’t be any good at reviewing if I didn’t offer constructive critique and I only offer it because this comic has such huge potential and is such a great read I would love to see it more finely polished so to speak. Personally, I hope you do follow the sales link at the bottom and give Infinite7 a try because I will definitely be adding this to my collection and will be passionately following the run!

For those that are going to join me in adding this comic to the collection, you can grab your copy from Comixology! If you’ve read Infinite7, where do you see the story going? Do you think I’ve missed anything? Sound off in the comments below or send us your thoughts on Twitter!

A typical small town Geek, so obsessed with his films, TV and comics I needed to find an outlet where I could talk about it all to my heart's content and share my thoughts!