Home » Netflix’s Death Note Is A Wandering Write Off 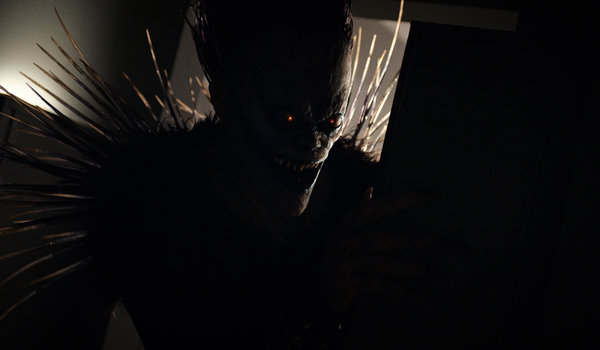 Netflix’s Death Note, based on the hugely popular manga-turned-anime created by Tsugumi Ohba and Takeshi Obata, strives to adapt the suspenseful detective horror franchise but tell its own quick-paced tale in the process. What made the anime so compelling was the discussion on morality, the exciting cat-and-mouse game between characters, and the supernatural world building. Netflix’s Death Note tries to make its delivery work, telling a simplified but still exciting thrill ride, which still managed to catch me off guard a couple of times, but ends up grinding to a discombobulated halt as, like all anime adaptations done by Hollywood, fumbles up the mythos in favour of silly decisions and familiar tropes.

This review contains spoilers for both the anime and the Netflix movie.

Now set in Seattle instead of Tokyo, the film focuses on Light Turner (Nat Wolff), a slightly emo but brainy teenager, who comes across a battered notebook called the Death Note, which literally falls out of the sky. He meets its creator, the delightfully creepy death god Ryuk (voiced and partially-mocapped by Willem Dafoe), who explains that whoever’s name is written in the book will die. Light is sceptical until experimentation leads to the gory deaths of a school bully and the scumbag who murdered his mother.

Light is then inspired to become the champion of the people, styling himself as a god-like figure named “Kira” to kill criminals across the world and bring about peace. He teams up with the unstable cheerleader Mia Sutton (Margaret Qualley), to spread his “justice”, and they quickly form a romantic relationship. Kira soon begins to be praised as a hero cult-style, prompting the police to track him down, led by Light’s dad James Turner (Shea Whigham). The cops then get extra help from an eccentric but brilliant detective simply known as L (Lakeith Stanfield), who wishes to bring Kira to the truth form of justice.

The portrayal of Light by Nat Wolff is a mixed bag. Admittedly, I am not particularly fond of the anime version of Kira, or least as a person – a self-justified, immoral, manipulative douchebag who has zero redeeming qualities and mostly started writing in the Death Note because he was bored and curious, has an irritating god complex, and doesn’t show a single genuine sign of concern to his loved ones when they are put in peril. On the other hand, his genius manipulation skills, talent for turning the tables, and calm, charismatic nature make him a compelling anti-hero.

The 2017 incarnation is quite the opposite. A loner of the geeky school variety, and is a lot more cautious, and even has a bit of conscience. While his anime counterpart would kill criminals and anyone who could expose his identity, Wolff’s Light is a bit more driven by morals. He only wishes to punish criminals and protect innocent folks, as exemplified in the opening scenes of the film, and being a minor example of victimisation himself, setting up Light’s belief that the justice system is flawed through personal experience. It is only towards the end of the movie does Light’s more ruthless, ingenious gambits and schemes come into play. Another issue is that Light lacks a sense of initiative, and is often pushed into making decisions by Ryuk and Mia.

On the other hand, Lakeith Stanfield does a good job portraying L, capturing his bizarre gesture and habits, like his passion for sweet things and weird crouching position. Though, there is more vulnerability to L, driven more by his emotions than his head, which can make it difficult to take the duality between him and Light seriously. At one point in the film, L goes ballistic, grabs a gun and spends a good five minutes running after Light in a chase scene which involves L performing parkour moves and sliding over cars. It feels a little out of place.

We don’t really get to see the world’s greatest detective do any of his trademark detecting. They explain that, as a child, L was locked in a room for seven months with no social interaction as a test for his mind to mould him into a great detective. This could have been used to explain L’s wacky behaviour and emotional outbursts, but it never is, and thus making his status as the modern day Sherlock Holmes come across as completely irrelevant and misrepresented.

In fact, the whole cat-and-mouse game is quite short and brief, with little interaction between our two protagonists, with L somehow figuring out that Light is Kira with no real explanation. And yet, Light’s dad somehow puts two-and-two together with crucial evidence, while L erratically just points fingers and acts all whiny and desperate when things go wrong. It makes him a little inept compared to the more organized Light and Mia.

The characters continue to make increasingly stupid decisions, yelling and screaming, and by the end of the film, feel barely in character. Light is set up as a character who is willing to do whatever is necessary to bring about justice in a teenager-esque mindset, but by the end, he is completely detached from his self-declared godhood, whimpering and pleading with Mia to throw away the Death Note so they can be together.

Speaking of Mia, she is the antithesis to the anime Misa Amane, being quite cynical, nihilistic, but equally as ruthless, but doesn’t have a bubbly, airhead persona to hide her darker side behind. Mia’s reasoning for joining in on the conquest of Kira is completely without reason. She is mildly angry at society and that’s about it. There’s no personal investment to be found with her apart from the fact she is more ruthless than her boyfriend. The romance between Light and Mia completely dominates the movie, and even then it is pretty flat and uninteresting.

If there was a light in the dark, it has to be Willem Dafoe as Ryuk. Though he mostly skulks in the shadows, Dafoe brings the character to life and delivers the best performance, really bringing in the devious, predatory essence he had as the Green Goblin. Heck, the mocap used to create Ryuk even includes a few facial features of Dafoe in it. However, Ryuk is portrayed as more of an actively evil character, goading Light into using the Death Note for the first time and even bends the established rules of the book to entertain himself.

The film does try to uphold the themes and thrills of the anime, but even question them too. There is one point where Mia shows Light a website dedicated to Kira with followers dropping the names of people they think deserve to die. While Mia is immediately plotting to get them axed, Light is more cautious, offering the plausible explanation that half of the names could just be for fun or those who don’t deserve death. The Death Note has at least ninety rules, but because of the limited time length, Light doesn’t really have much chance to see how far he can bend his power and utilise the book beyond a couple.

The film was directed by Adam Wingard, an upcoming name in the horror genre, and while the film is visually good thanks to his signature style, it feels a little hasty to rush through the plot from one scene to the other with little time to explore the characters and true power of the Death Note. We race through a montage of Light and Mia’s killing spree and the impact Kira has on the world, a particularly interesting part of the story which has never been properly explored before, and is skimmed through here. Perhaps the better option would have been to adapt the anime into a ten-episode Netflix series, with more time to explore the world of Death Note. At least then, there would’ve been more space to have fun and focus on what made the series so great.

The film also relies on gruesome, gory deaths to shock the audience in absurd fashion straight out of Final Destination. After the first kill, in which a school bully gets decapitated via a ladder, Ryuk reads several of the rules from the Death Note, including one which states that the manner of death must be realistic (“No shark attacks when someone is on the toilet”), but a silly, multilayered sequence of events can somehow lead to a guy getting the top half of his head taken off by a ladder attached to a pickup truck, which just so happened to move out of the way of people in the street via spilt groceries and a basketball.

Another issue is the obvious change of setting from Japan to America, with accusations of whitewashing. Light and Mia go out of their way to try and utilise the Kira name without it sounding forced, claiming it is both Russian and Celtic for “light” (it does not for either), and even use the Japanese phrasing to throw off the authorities and make them think that the culprit is located in Japan. However, they also jump around the fact that Ryuk is a Japanese death god (or “Shinigami”), implying he is more of a demon who kills people for chaotic reasons – only for Light to then be examining a book, showing Ryuk depicted in his original anime design in a piece of Asian artwork. Make up your minds.

So, Death Note, while a fun movie and has a pretty strong first act, but collapses as it races through to the end. Death Note is meant to be a clever psychological horror tale, a battle of wits between two geniuses, and blur the line between good and evil, the definition of justice, and the actions of Kira on both Light and those around him. Instead, we get a film that abandons the central game of chess and police investigation halfway through, turns its characters into whiny, idiotic twerps, and throws the whole thing off the rails to try and give up a Bonnie and Clyde romance. And they even had the nerve to end on a cliffhanger and set up a possible sequel. The one thing that makes the movie worth watching is that it was directed by Adam Wingard, and Willem Dafoe’s performance as Ryuk.

Netflix has made some great TV series, and perhaps Death Note could have worked and succeeded more as such, rather than a ninety-minute film that tried to fit the whole plot into one film like it The Last Airbender did.

Have you watched Death Note and what were your thoughts on it? Did it succeed or fail as an adaptation? Leave a comment below or on our Twitter feed.