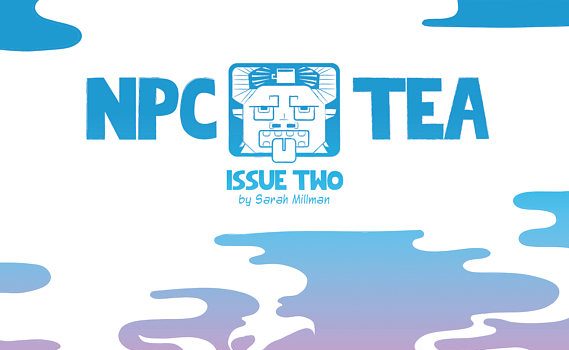 NPC Tea #2 and #3 by Sarah Millman succeed as both a continuation from the first issue and as a story in their own right. The urban fantasy series continues to go off in an original direction, as it seamlessly blends the more traditional fantasy elements, orcs, elves, magic, and magic schools, with the slice-of-life bits like getting to class on time, dealing with a bad boss, and holding down a part time job. It’s just as fun and fresh as the first issue, even as the series gets deeper into its larger story arc.

Continuing the story shortly after where the first issue left off, Hannah joins the crew at Y Ddraig along with fellow part timer Iro and begins to get into a routine throughout the week, all leading up to a confrontation with her boss Oz. These issues also introduce the first antagonists of the series in the form of a mysterious woman and her crew wannabe-warlock flunkies and a mysterious voice in a young woman’s head.

If you read my review of the first issue, than you’ll understand me when I say that #2 and 3 hit a lot of the same beats as the first one did (and if you haven’t, go read it now as I do a more in depth analysis of points I’m going to glance over here). The characters each have strong and unique personalities, the story is fun and interesting, though the precise rules and mythology in play aren’t as fleshed out as it could be, and the art is minimalistic and uses color to denote different story threads, and where they mix denotes where those threads intersect. These issues take all of that and expand on it.

The characters all get a bit of depth added to them, with the exception of the ones introduced in this issue who all get strong starting characterization. Brooding, artsy Bryn gets hints of the deeper issues he wrestles with on a daily basis and starts to bond with Hannah, who herself shows an assertive side and has a truly badass moment for good measure. We start to see Oz’s protective side, for good and ill, in regards to Bryn in addition to the long suffering businessman he demonstrated in the last issue. The mysterious antagonist and her flunkies are shown to be conniving and in-over-their-heads respectively, and are set up for great bits of story in future issues. Overall, the characters seem to be headed towards greater depth and awesome adventures in the issues to come.

The story itself retains the whimsy from the first issue while expanding to show the darker aspects of the world. We get our first look at a villain from this universe and the shadowy way in which they operate. The themes also grow a bit darker, as the story introduces loss of family and free will into the mix, but it does so in an organic manner that makes these feel more like revelations about the world and logical extensions of the “rule-set” that governs this universe. These issues feel a lot like the lighter episodes of Buffy the Vampire Slayer, as it’s a fun, day-in-the-life of magical beings, but with shadows lurking at the fringes all the while.

Even the art follows this pattern. The blues and purples remain the primary color palette, but are expanded with just a tinge of yellow and tan (which is just oh so very reminiscent of the history segment from the beginning of the first issue). The villain also speaks in her own special font, which was a nice touch. Overall they’re as good as the first issue, which was pretty good, and I recommend picking up the series in the strongest possible terms.

If you read and liked the first issue, you’ll like the second just as much – and if you haven’t read the first YOU SHOULD. The first two are available in a package at heartoftime.co.uk and issue 3 will debut this weekend at Thought Bubble. You can follow the creator @Heart_of_Time. Have some thoughts on the matter? Leave a comment below or share your thoughts on Twitter @AP2HYC or with me personally @Bard_Brehon.