Home » Spectrum’s Finest: Celebrating Captain Scarlet and the Mysterons at 50 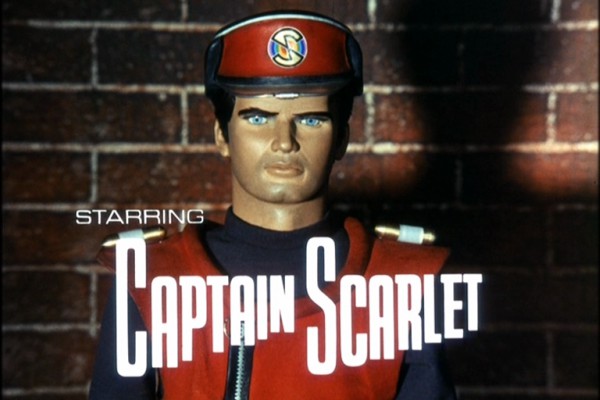 One key aspect that makes Gerry and Sylvia Anderson‘s marionette masterpiece Thunderbirds so endearing is it’s seemingly endless level of optimism. Once you make your way past the campy tangle of puppets that brought the characters to life, you see that it’s a show that celebrates the value of life. It’s presented to us as a futuristic world in which war, famine and violence appear to be things of the past, and everyone exists in a state of technological utopia. Not every aspect of it has aged well, it was, of course, a future envisioned through the lens of the 1960s. The show’s female characters don’t get a great deal, and there’s an oddly gargantuan level of alcohol and cigar consumption amongst the otherwise heroic Tracy family. Still, it’s message remains clear – everyone should and can be saved. The problem this undoubtedly presented Gerry when Thunderbirds was unexpectedly cancelled due to an unstable US sale is where would he go from here? Having spent ten years at this point producing marionette shows, featuring space explorers, undersea conquests, magically-assisted cowboys, where do you go from there?

The answer is found in a show that feels the mirror opposite of Thunderbirds. Where that show talked earnestly about preserving life, Captain Scarlet and the Mysterons celebrated death, glamorising it as an inevitable gateway to some of the most awesomely violent sci-fi children’s TV had to offer. The 10th sci-fi marionette series to come from the puppet wonderland of Slough Studios turns fifty today, and its action-driven blitzkriegs of prototype Power Rangers battling omnipotent, invisible aliens coupled with a sour message of the messy futility of war, remains as intoxicating as ever. 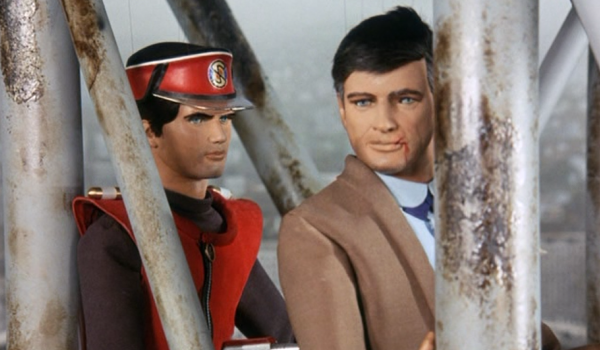 The show makes its dark intentions clear from it’s muscular yet perverted opening episode, ‘The Mysterons’, in which our titular hero finds himself one of the episode’s main enemies. From the episode’s awesomely horrific opening, in which Captain Black of the world’s finest security outfit, Spectrum, accidentally triggers a war of nerves against the Mysterons when mistaking their signs of welcome for an attack. Using their powers of reconstruction to rebuild their decimated city and understandably tiffed, the Mysterons announce their intentions to bring the world to its knees, attack by attack, starting with World President. From here, more of Spectrum’s finest become entangled in this cryptic, alien net. Captain Scarlet himself becomes the final, desperate pawn in the Mysterons’ devilish game. Murdered and replicated into the Mysteron cause within mere minutes of introducing the character to us, it’s astounding to think that your introduction of your hero to young audiences involves said hero spending 90% of his debut appearance as a bad guy.

It’s this logic Captain Scarlet and the Mysterons utilises to its fullest extent, wearing its dark heart on its sleeve. ‘The Mysterons’ climaxes with Scarlet, having captured the World President, embroiled in a shoot-out with his former fellow Spectrum officer, Captain Blue atop a skyscraper car-park. His colleague and friend shoots the fatal bullet that sends the Mysteronised replica of Captain Scarlet falling to his death, emitting a piercing, animal-like scream. No Supermarionation show had ever asked its young audience to accept the idea that your hero could die, let alone die multiple times in one episode! However, all is not as it seems. Inexplicably surviving the fall, having his Mysteron hold relinquished yet retaining their indestructible capabilities (the miracle of plot convenience is a strange and untamed beast), Captain Scarlet returns to Spectrum as his former self, now their greatest weapon in the fight against the Mysterons. 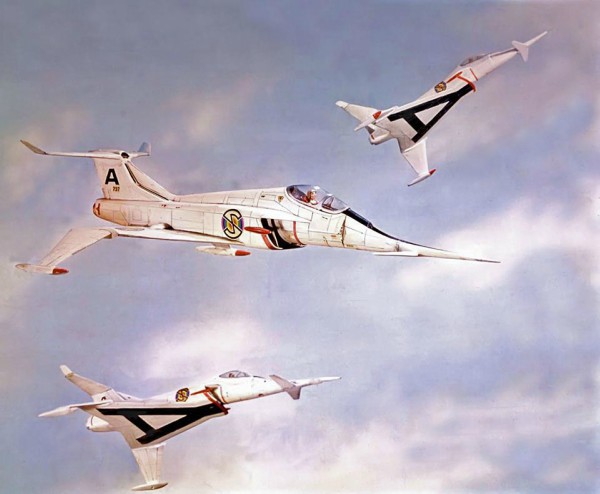 From here, Captain Scarlet and the Mysterons delights in showing us how an all-too-easily avoidable war can result in a thoroughly entertaining blitzkrieg of retro-futuristic action. Week by week, Captain Scarlet, Captain Blue and the other members of Spectrum battled their way through the Mysterons’ increasingly inventive campaigns of other-worldly terrorism. Locking themselves in a feedback loop of murdering unsuspecting civilians and rebuilding them under Mysteron control to carry out their threat, it seems there wasn’t any other children’s television show at the time that had its finger on the Cold War’s pulse as much as Captain Scarlet did. Routinely saving the day and living to see the next one thanks to his powers of indestructibility, it’s this superhero ability that arguably dragged the show down – there’s little danger one can conjure up if you’ll automatically pull through. As Lieutenant Green himself says wiry in the episode ‘Attack on Cloudbase’; “Anyone can be brave when they’re indestructible”. Everyone from critics to the show’s own creative staff (i.e. Alan Fennell, a script-writer for Fireball XL5, Stingray and Thunderbirds and later editor for the popular spin-off comic TV21, of which Captain Scarlet‘s adventures continued off-screen) found fault with this all-too solvable premise.

I’d like to argue against this case. Not that it’s impossible to disagree with this sentiment, but making your hero immune to death results in other winning factors for the series. With no limit to how much Captain Scarlet can endure, there’s no limit to the adventures he finds himself up to his neck in. The series’ end titles, a series of paintings featuring Captain Scarlet in a variety of death-induced poses, encapsulate how the show had a vision as wide as the sky that Cloudbase rests in when devising weekly premises for the show. Plots involving assassinations of world leaders are counterbalanced by more abstract ploys featuring the murder of three small-time crooks as a comment on humanity’s glutenous nature. The abstract nature continued by the Mysterons’ targeting the very Utopian heart the world of 2067 has achieved, such as an attempt made on the world capital Futura City. There’s even an epic three-parter in which the Mysterons unleash an attempt at colonising the Earth’s moon. 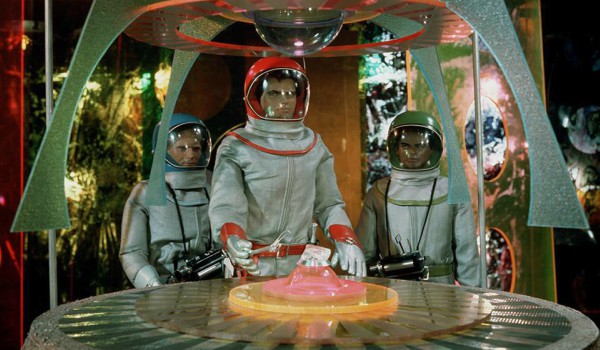 In doing so, Captain Scarlet and the Mysterons creates a cohesive, lived-in world that’s rooted in a harmonised, militant utopia, bolstered along by an endless array of beautiful model and miniature work. Spectrum are presented as an omnipotent, para-military outfit who exist on a global, 24/7 scale. Unrestricted to their base of operations ala Tracy Island, Marineville or Space City, Spectrum has agents scattered throughout the globe, tasked with defending the Earth. Peppered throughout the show itself are references and appearances by a multitude of spin-off outfits under the Spectrum moniker – Spectrum New York, Spectrum Intelligence Agency, Spectrum Security Vaults, Spectrum Headquarters London. Captain Scarlet and the Mysterons feels like the final step towards Gerry Anderson achieving his Cold War-themed paradise that stretched back to Fireball XL5.

However, it wasn’t always plain-sailing for Spectrum. The very nature of the show’s premise demanded that Spectrum, with all its bells and whistles, are thrust into a situation they aren’t prepared for. This of course raises one of the series’ best plot-holes – what was Spectrum’s purpose before the advent of the Mysterons? Such a theory is never dwelled upon in the TV show itself, but if you buy into the TV21 multiverse theory, in which Captain Scarlet co-exists alongside Thunderbirds, Stingray, Fireball XL5, Zero-X, then Spectrum were formed with the definition of being the world’s number one security outfit, designed to rise above the political red-tape of the various World Security Patrol outfits. Such a theory is recommended with a grain of salt, but it does demonstrate how valuable Captain Scarlet and the Mysterons‘ extended universe was. I mean, did you know there’s a TV21 story in which Captain Blue gets kidnapped by a Mysteronised pterodactyl? I bet you didn’t.

Additionally, not satisfied by continuously exposing its hero to gratuitous deaths, Captain Scarlet and the Mysterons featured several episode where Spectrum loose the fight and the Mysterons successfully assassinate their target or demolish their chosen establishment. Such a resolution to these handful of episodes demonstrates the futile nature of this war of nerves, fuelling Captain Scarlet‘s dark heart to plump richness. There was still an abundance of light to counteract this darkness in Captain Scarlet, specifically within the symbolism of hour hero’s home – Cloudbase. Existing to defend the Earth and yet simultaneously detached from it, Cloudbase houses within it an idealised community that recalls the optimism found in past Anderson shows. Almost every Spectrum Agent and Angel we see is of a different nationality or ethnicity, whilst Cloudbase itself exists as its own world away from the other world it defends. It’s where out heroes work, sleep, indulge in culture, and receive medical care. Even if Spectrum itself transcended the Cold War barriers of Tracy Island, Marineville and Space City, Cloudbase itself represents a continued approach to the perfected community that Anderson was keen to promote in his Supermarionation shows. 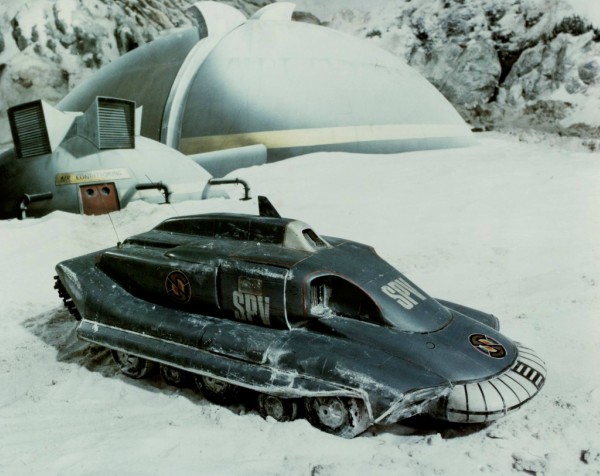 That’s perhaps the biggest compliment one can pay Captain Scarlet and the Mysterons – it wasn’t all dark. The fact that Cloudbase represents a multi-cultural community is treated with great subtlety throughout the show, most likely because it was subservient to Captain Scarlet‘s true calling; an blood-thirsty amalgamation of ethereal body horror and brutal sci-fi. It’s action-driven stories never quite lent themselves well to arcs or development for the show’s heroes and villains, but it didn’t need to. The intoxicating mixture of a strong, uniquely dark premise and impeccable models, miniatures and marionettes which give the show a robust visual flavour make Captain Scarlet and the Mysterons an essential chapter in the Supermarionation saga.

It’s comments about the futility of war may be depressing as hell, but when war looks this good, it’s hard to resist the technicolor lure of Spectrum as they fight the good fight.

A Place To Hang Your Cape’s senior editor Fred McNamara is writing a book celebrating Captain Scarlet and the Mysterons – Spectrum is Indestructible! You can find out more about the book, and pre-order it, from its publisher, Chinbeard Books.

What are your memories of Captain Scarlet and the Mysterons? Why might you think its popularity has lasted for so long? Let us know in the comments section or send us a Tweet!