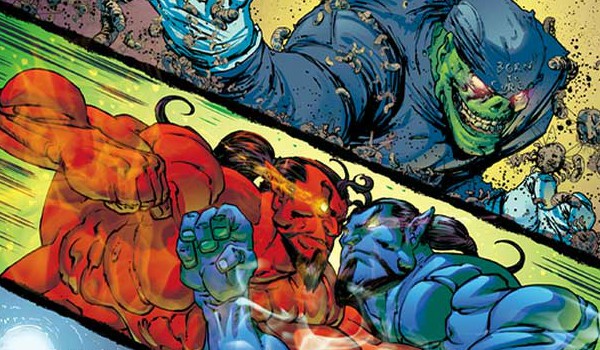 Modern Testament Vol. 3, created and written by Frank Martin, continues the “anthology of the ethereal” with some truly thought provoking stories and first class artwork. The premise of the book is that biblical creatures are still running around the modern world and interacting with mortals for good or ill. It’s an interesting starting point, and the book takes it in interesting directions. This volume contains three different, unrelated stories that weave biblical premises (for example angels interbreeding with human women) into modern day story conflicts (an abusive single mother).

Now at this point it would probably be prudent to address the elephant in the room. While the book relies heavily on religious imagery, it doesn’t make any overt statement on religion or subscribe to a particular religious interpretation. That being said, if heresy or blasphemy (which I don’t necessarily feel is present, but I could see where the more religious might) are your triggers then this book may not be for you. If you’re unsure, then as a reference the book uses religion the same way that Supernatural does, more of a plot device and reference point than a statement on any particular dogma.

The first story, “Shoulder Djinn”, follows a pair of djinn (spirit beings from Arabic/Islamic mythology) that act as the angel/devil on my shoulder to a young man with a sick mother and too many medical bills. The second, “The Abandoned”, presents a slice of life of a high school aged nephilim (human-angel hybrid) with the abusive mother I mentioned in the first paragraph. The third and final story, “Down with the Sickness”, chronicles the last stages of a pharmaceutical CEO’s very personal confrontation with Pestilence (one of the Four Horseman featured in the Book of Revelations). Each story is well written and uses the pages allotted to it effectively to deliver a satisfying story arc.

“Down with the Sickness” might have benefited from more subtlety, but was enjoyable regardless. The main criticism is that the stories assume that the reader has a certain level of familiarity with the religiosity it draws inspiration from, which is required to enjoy the stories to their fullest, though they’d be enjoyable regardless, just lacking something. Making the anthology’s mythology founded in Judeo-Christian and Islamic religious iconography almost certainly makes it more accessible to the general public versus more standard fantasy or mythology (and adds a certain freshness to the premise), but if you haven’t glanced at the more out-there parts of the Bible recently you may want to before picking this book up.

The artwork is generally on par with the level of work done by DC and Marvel. The various artists and colorists (Lucas Urrutia, Ezequiel Dominguez, Francesco Conte, Macarena Cortés, Jaoquin GR, and Matej Stasko) do solid work with an emphasis placed on realism over artistic storytelling. “Shoulder Djinn” uses a greyed out background to indicate when parts of the story are happening on the spirit plane, but other than that the artwork is fine example of realism in comics. This works to the stories benefit, as the more realistic feel helps keep the reader grounded in stories that rely heavily on the fantastic for storytelling.

Overall, this comic is worth the read. At best it’s thought provoking, at worst it’s a bit preachy, but it’s neither boring nor too far removed from the everyday as to make it incomprehensible.

Modern Testament can be bought from Insane Comics. Will you be grabbing a copy? Let us know in the comments section below or send us a Tweet!