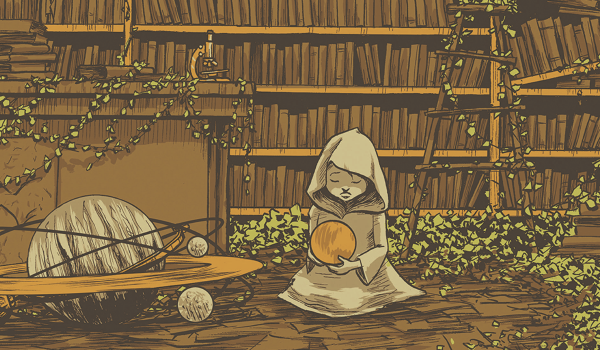 Don’t let the title fool you. You’d might think that I’m reviewing for you today a tale of the old west. But we aren’t stuck in the past; well, not technically, but I’ll get into that shortly. Instead we witness a great bit of Sci-Fi as future technology and past beliefs clash against a lush, overgrown, dystopian backdrop. After The Gold Rush is the brainchild of Miles Greb, who has constructed a tale that opens the debate of science and religion that culminates in misunderstandings, fear, and violence all in the pursuit to learn more of the world we have created, and left behind.

Our tale centres on Scout, a young girl in the distant future that has learned of the universe encased on a base on the Saturn moon of Titan and the computer on her wrist (the next step for smartphones perhaps?). Whilst attempting to explore the galaxy, a malfunction forced her to land on the planet we once called home. Welcome to Earth. Time has taken its toll on our planet as it has become overgrown with plants and green, a certain young botanist’s dream come true. But all is not as it seems as it appears that humanity never completely abandoned its home, and Scout, whose mind is looking towards the future and to learn more of her surroundings, will encounter those that are stuck in humanity’s past, and more dangerous, ideology…

Now this story does sound a bit complicated and trust me it can be, but I can’t help but enjoy this approach. The subject matter is ripe for expansion and is greatly reflected in Scout herself and those she encounters. Scout is an eager and highly curious individual, that has grown up encased in a lab on another planet. Isolated, she expanded her knowledge and understanding of the universe. But this alone may not prepare her for this new world, and her social skills also leaves a lot to be desired and blunt approach quickly leads her to trouble. Whilst on the other hand, the current inhabitants of Earth have grown up here, and the pursuit of knowledge is instead replaced by the pursuit to survive and thrive in this world. The lessons of survival are passed down to generations and those sayings and beliefs are spread and expanded upon where the unknown is explained by unnatural forces that need to be dealt with. You can tell Scout is gonna have a great time here right?

Now onto the fantastic art design. Isaac La Russa is the main artist for this title and he has done a wonderful job in bringing this universe to life. The attention to detail is insanely high, especially with the great canvas of the lush forests and vegetation. With Scout’s unique attire she has the perfect colour palette to stand out from the literal forests of green and brown and contrast with Earth’s inhabitants, her bright attitude and clothing bringing hope as well as unwanted dangers.

However, there is a mere personal gripe I have which I found was a little disruptive to the flow of the narrative, and that is with the word choices during certain conversations. Scout has a common tendency to overload with technical jargon and scientific terminology, to an purposely comical degree. Her arrogance whilst endearing can sometime come across as mocking or ignorant, no wonder some people may not take to her well. This gripe can also be reversed as well. The inhabitants live by the teachings of preachers and past generations and their word choices are spoken as if reading from an olde English script. It kind of disrupts the direction of the conversation in places for me personally. But as it’s early days in this story, this may be addressed as our characters grow, Scout’s journey and those she has encountered so far have only just begun.

Personal gripe aside, I overall enjoyed this tale of human perseverance and attempting to understand the world. The theming of science against personal beliefs is expressed well here, providing a sympathetic view to both the side of scientific conclusions and human ideology, all against a beautiful overgrown backdrop. With Miles Greb’s story direction and Russa’s artistic designs, After The Gold Rush shows great potential to grow and expand upon the universe set here and with plenty more stories to tell, Scout will learn more of the world that no computer or research team will ever show her. And with those that fear new ideas and change, who knows who, or even what, may see her as a threat to their way of life. A great introduction and I can’t wait to see what is next.

Have you had the chance to read After The Gold Rush? What do you think is next for our intrepid little scientist? Sound off in the comments or send us your thoughts on Facebook or Twitter! You can join in with Scout’s adventures from Miles’ website too.