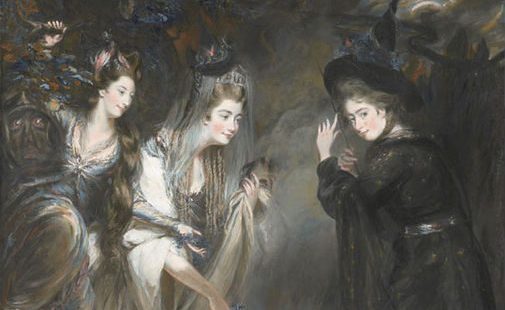 Ah autumn, when a one’s fancy turns to sinister secrets, eerie figures hidden in the fog, and of course, witchcraft. Along with the thinning of the veil, autumn also brings with it more lighthearted pleasures-the foremost being crisp cool air, perfect for snuggling up with a good book. I find the rich golden light of autumn especially well suited for comics. So here’s a selection of my favorite works of witchy fiction for when you need some you time after a night flight of wild Sabbath revelry. 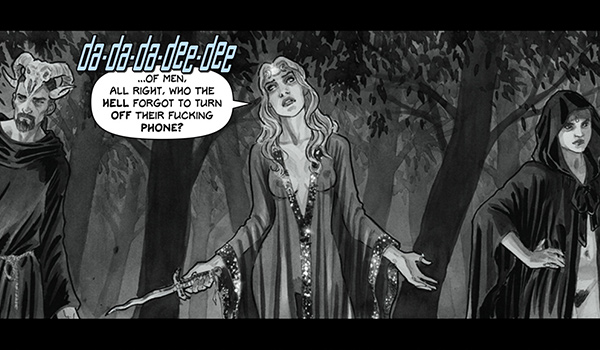 Black Magick follows Rowan Black, cop and witch through the town of Portsmouth (the platonic ideal of coastal New England). Greg Rucka gives us a delicate line between the magical and mundane for our heroine to walk. Meanwhile Nicola Scott creates a truly beautiful world in subtle black and white (and some truly incredible ’80s style hair).

Personally I fell in love with the series in the first few pages when Black’s cell phone goes off in the middle of a Mabon ritual (much to the annoyance of her coven). My only caveat is that Black Magick’s witchcraft is exclusively Wiccan and I would have loved to see some variety, but this is a minor issue in an otherwise excellent series. 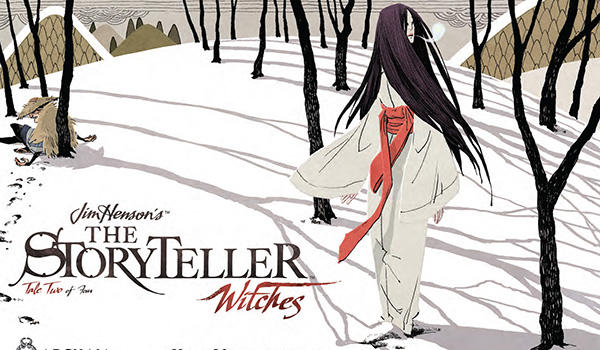 Jim Henson is rightfully a legend in TV and film, but of all his works I think The Storyteller is my favorite. Originally airing in 1987 The Storyteller retold various fairy and folktales with a cast of puppets and live actors. It was charming and magical and perfect. It also had a pretty limited run. So imagine how delighted I was to find the series in comic form and with four witchy stories (just FYI: you should be imagining me flailing with joy).

Nostalgia may have brought me in, but Witches more than stands on its own; from S.M. Vidaurri’s lyrical “The Magic Swan Goose & The Lord of the Forest” to Kyla Vanderklugt’s warm take on the Yoki Onna in “The Snow Witch.” From Matthew Dow Smith‘s moving and melancholy meditation on myth and stories in “The Phantom Isle” to the traditional retelling of “Vasilissa the Beautiful” by Anthony Minghella, Susan Kodicek, Anne Mountfield, Jeff Stokely, and John Rauch. Witches gives us a veritable smorgasbord of magically minded ladies and the fairy tales they call home. 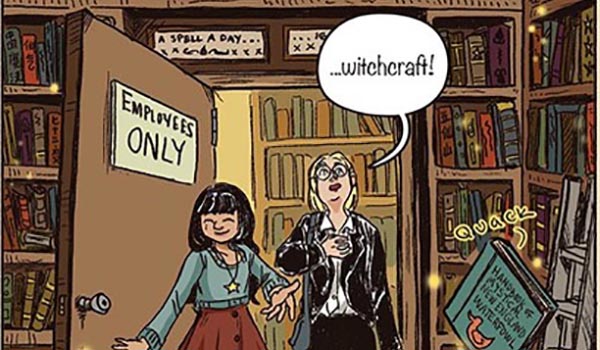 First, the bad news: Mooncakes seems to have gone on hiatus as of February. Now the good news: Mooncakes is one of the most adorable comics (witch related or otherwise) out there. Following the adventures of childhood friends, witch Nova Huang and werewolf Tam Lang investigate a demon horse in the woods of a small New England Town.

Suzanne Walker creates characters with warmth and humor while Wendy Xu brings them to life with a bright, expressive style. Along with demon horses and a magical bookshop Walker and Xu also delivers a cast of queer witches and werewolves of color. Truly Mooncakes is everything you ever wanted and more (you did want demon horses, magical bookshops, and queer witches/werewolves of color right? Of course you did). 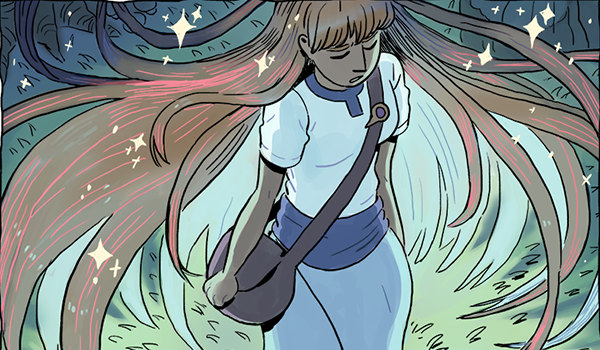 Ariel Ries brings us to Hyalin, a kingdom of witches where the strength of one’s magic is directly proportional to the length of their hair. Witchy follows the young Nyneve as she attempts to escape conscription into the Hyalin military due to her extraordinarily long hair. Now she’s on the run and learning about the underground, the spirits, and her kingdom’s history as she tries to stay alive.

Ries tells her story with bright, bold art and a skilled grasp of action making Witchy a delight. Along with fantastic art there’s also a glorious cast of badass witches who are sure to enchant you. And with such detailed world building Hyalin is sure to draw you in. 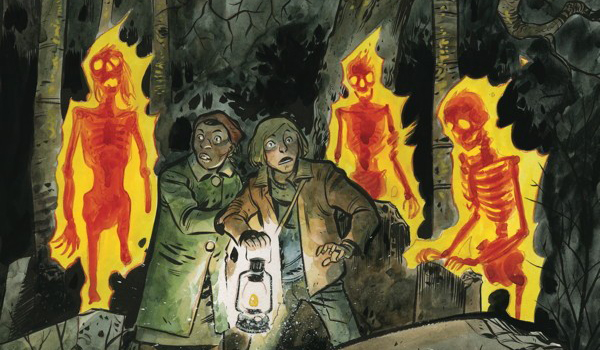 A beautiful piece of rural horror, Harrow County follows the Emmy as she awakens to her magical potential. She’s just a girl who also happens to be the reincarnation of an ancient witch. Emmy must now navigate her power and legacy with her loyalty to her family and community.

Cullen Bunn has a clear love of horror and folktales that just pours from his story while Tyler Crook illustrates the County with a quiet, naturalistic style. Haunting in both prose and art Harrow County has a quiet subdued feeling. Like wandering down an empty country lane late into the darkening year. 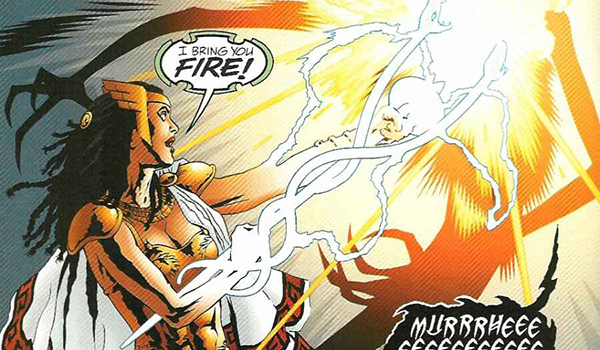 Promethea is not so much a witch as a goddess-superhero-avatar-of-the-apocalypse, but is openly about Alan Moore’s occult philosophy. Promethea opens with Sophie Bangs, an ordinary college student studying the titular character. Promethea has been appearing throughout history and art. Sophie’s studies will take her on a journey through the major arcana, the tree of life, and all the way to the end of the world.

Beautifully illustrated by J.H. Williams III there’s precious few books like Promethea in either comics or occult literature. Now as this is by Alan Moore do be aware that there is some weird and disturbing sex stuff, but despite that it’s still an excellent title. 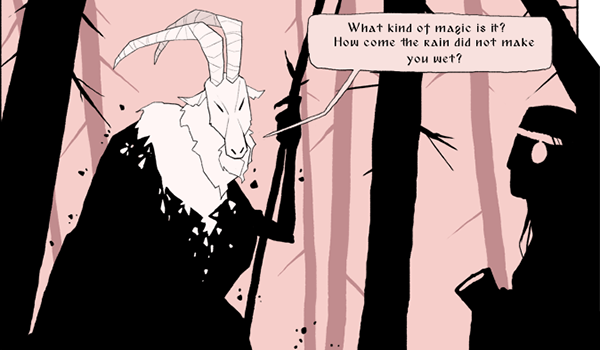 Katarzyna Witerscheim’s Slavonica is not solely about witches, but Slavic folklore in general. The series is currently on the shorter side, with only three tales, but already we have a range of witches. They are clever and desperate, kind and cruel, generous and greedy, but always powerfully dynamic.

With intricate art and striking landscapes it’s all too easy to get lost in the deep, dark, woods. But given Slavonica’s beauty and strangeness that’s just fine with me. Do yourself a favor and check out one of my favorite witches in Witerscheim’s “Deal.” There’s some grad advice for both witchery and keeping your clothes neat and tidy. 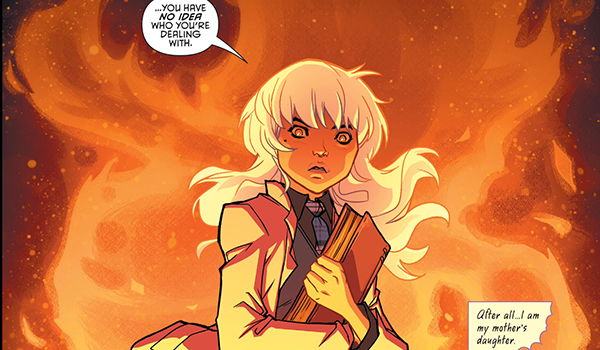 Gotham Academy may be a bit of a stretch dealing as much with supervillains as spells but it’s here for a reason. While really an ensemble piece Gotham Academy’s main character, Olive Silverlock, is a girl with a mind for mysteries, especially those of a potentially occult nature. She’s alone in the world save for her friends. Among these friends is Pomeline Frych, witch and perhaps the most stylish Goth teen since Lydia Deetz.

Becky Cloonan and Brenden Fletcher take on high-school in one of DC’s most deadly cities with charm, humor, and a clear love for the Batman mythos. Karl Kerschel meanwhile skillfully contrasts the school’s long history with all the energy of its students. So if you like youthful hijinks, centuries-old conspiracies, and the occasional Batman cameo (and who doesn’t?) this is the series for you. 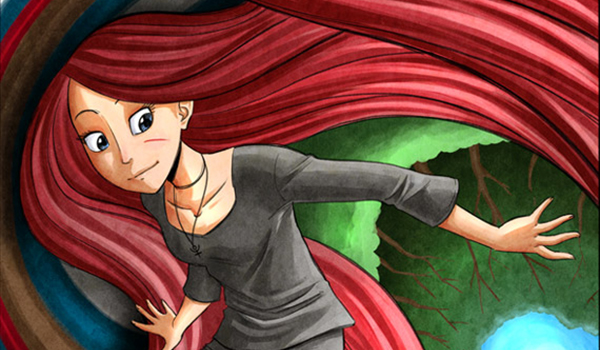 I’ll be honest with you, this is the only comic that doesn’t directly talk about witches; but with spirits, psycopomps, and soul flight I’m going to go ahead and include it. Tom Siddell’s Gunnerkrigg Court is set in a surreal (and at times infuriatingly bureaucratic) factory/school/city. It’s a world of magic, yes, but also fantastic science, and an untrustworthy government. Think Harry Potter meets The Trial.

Siddell is a master of atmosphere and his art is capable of invoking claustrophobia, mystery, and wonder-often all at once. Gunnerkrigg Court expands into an intricate story of friendship, mystery, and mythology that’s sure to capture you. 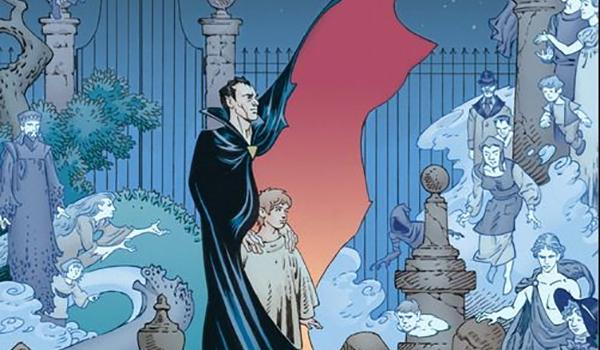 This entry is really about one part of a novel, but it concerns a truly delightful young witch. Neil Gaiman’s Graveyard Book follows Nobody Owens through his childhood with a family of ghosts, a vampire, and a werewolf. Nobody befriends Liza Hempstock, a young woman murdered for witchcraft.

Galen Showman illustrates our graveyard and ghosts with delicate and fluid line work. The Graveyard Book is Gaiman at his most charming, but there’s something about Liza that’s simply a delight. While the whole novel is excellent it’s worth reading just for her.

3. The Chilling Adventures of Sabrina 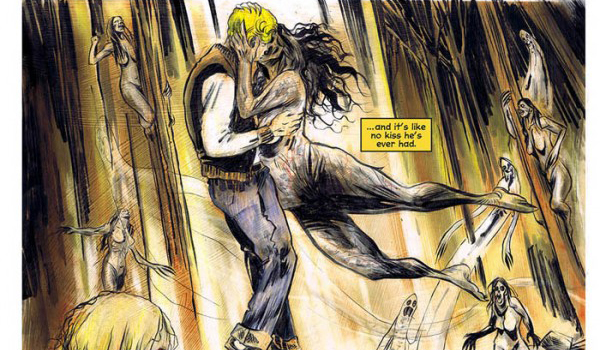 It’s everyone’s favorite teen witch, but back in an altogether alarming fashion. Sabrina Spellman is torn between life as a witch or a mortal but will soon have to make her choice. Roberto Aguirre-Sacasa’s Sabina is pretty much as you remember her but with the Devil, Aleister Crowley, a couple subtle Glycon references, a strong influence from classic horror, and a great deal more violence.

Complimenting all the horror are Robert Hack’s beautiful watercolor illustrations. Hack brings Sabina’s nightmares to life in a truly unsettling fashion. Seriously, he knows his eldritch horror. So come join the original teen witch in her new monstrous home. 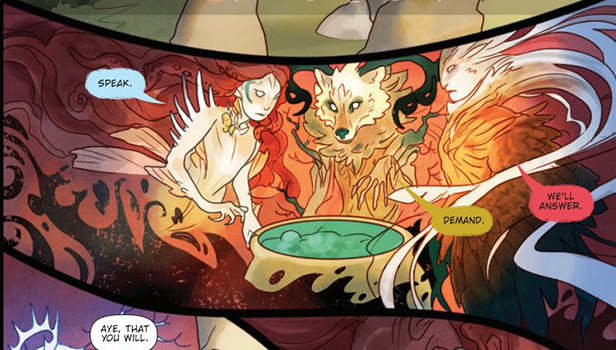 Toil and Trouble takes us back to Macbeth as told through the lens of the weird sisters. Two of the witches argue over who they should make king and set into motion Shakespeare’s tragedy. Mairghread Scott skillfully balances the witches while allowing each to shine in this tumultuous tale. Kelly and Nicole Matthews brings them to life with brilliant art and perhaps the best visual representation of magic I’ve ever seen.

Toil and Trouble is about Macbeth, yes, but also about a magic power struggle, loss, and sovereignty. It’s equal parts poetic and heartbreaking, a must read for any fans of witchery, Scotland, and/or Shakespeare. 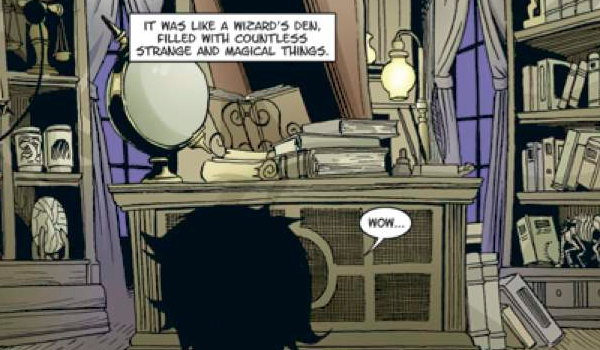 Courtney Crumrin follows our heroine as she through her magical education with somewhat questionable help from her uncle. Drawing on traditional folklore Ted Naifeh is especially good with his faeries. They’re beautiful, unsettling, and inhuman; owing a great deal to pre-Industrial depictions of the Good Folk.

Naifeh’s style is hypnotic, there are plenty of deep shadows to draw you in. With elegant art and a delightfully sardonic heroine Courtney Crumrin is perfect for these sweet October nights.

And there you have it my lovely witches. Thirteen wonderful comics that explore what it means to be a witch in this and many other worlds. Perfect to pass around the coven and read by the light of a whole host of Jack O’Lanterns.

What about you gentle readers? Who are some of your favorite witches from the world of comics? Sound off in the comments below or let us know on Twitter.