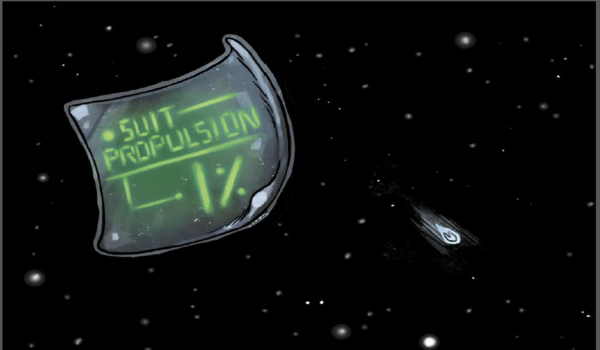 From The Odyssey to Kill Bill, tales of return and revenge have captivated the human imagination. Impossible fits itself comfortably into this milieu, serving up a trip to the moon and back that is at times thrilling, but often a little vague and hard to keep track of. Balancing telling a standalone story and preparing for the coming issues of Frostbyte Legacy, Impossible straddles the line between comic book and graphic novella. It is a fine read, but has to do too much set-up for the rest of the series to be fully satisfying.

Written by Chris Sides, with art by Jake Rowlinson and colors by Daniel Franco, Impossible tells the story of Will McGillis, a British physicist headed up into orbit to clean space debris. But once in the debris field, he discovers that the mercenary crew he’s gone up with are not as reputable as Frostbyte claimed, and is quickly forced to fight for his life. Shoved out the airlock of the Derelict International Space Station, in an old spacesuit with little fuel, McGillis barely escapes with his life. With his friends dead and a traitorous crew ransacking the ISS, McGillis must fight to survive. On a trajectory to deep space, his one way home is to slingshot the moon and crash back to earth. 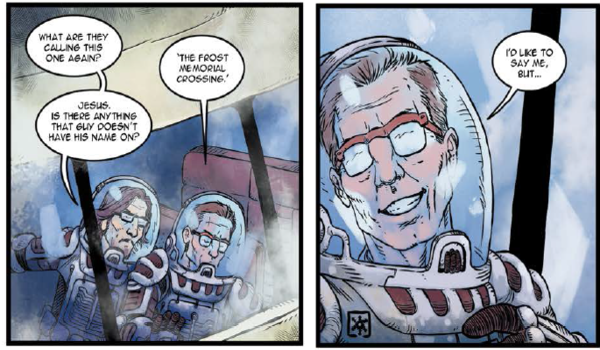 This plot is simple and concise, and it moves along at a steady and engaging place. Chris Sides sketches the path of the story clearly and competently, and the plot itself was never unclear on the broad strokes. Some moments, such as McGillis and his two loyal crew members time in the airlock, were genuinely riveting. McGillis’s moonshot, which opens and closes the narrative, is a throwback to classic man vs space sci-fi stories. The dialogue is classic action movie fare, loaded with quips, come backs, and declarations of revenge. Impossible is enjoyable, and it sets up its sequel, The Gunrunner, quite nicely.

However, the necessities of setting up the rest of the series, and the conventions of the genre conspire to hamstring Impossible. The non-action dialogue can be a little stilted, especially when providing exposition on the nature of the world. The action, while usually dynamic, is punctuate with scenes dominated by exposition. These can be interesting, but they slow down the pacing dramatically.

Impossible‘s art can also have similar issues of variable quality. Generally, the art is crisp and well-defined, especially when showing space and McGillis’s muscular jawline. But in some scenes, characters heads and bodies are distorted, odd, and stilted, in a way that they are not in other scenes. It feels as if attention was paid to some panels, but not to others. This is a shame, because overall, I like Rowlinson‘s art style. He has a good eye for distinct faces, and large, epic movements. Franco‘s coloration is also impressive. Consistent and vibrant, he makes scenes pop in a way befitting a sci-fi epic.

Despite its flaws, Impossible is a comic worth reading. It mixes a classic sci-fi sensibility with action movie flair, and sets up well for the following books. I recommend it to anyone interested in the British comics scene or the man vs space genre.

You can find out more about Impossible from Chris Sides’ official website! Have you already read the comic? Let us know in the comments section below or send us a Tweet!