Home » The Kill Screen Returns With A Captivating Prequel 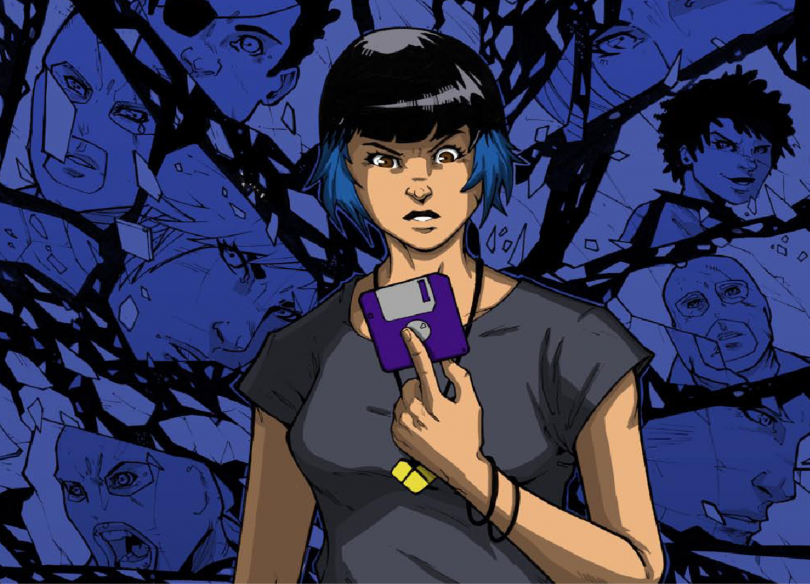 How are you, Capers? All your base are belong to us. I haven’t reviewed an indie comic for quite some time, but my go-to favourite has been The Kill Screen, written by Mike Garley, Josh Sherwell, and Mike Stock, a delightfully original take on a post-apocalypse setting where an incident called “The Kill Screen” ended civilization, and computer errors, viruses, glitches, and video game/internet-related memes are now weapons of death and destruction. The four-issue limited series had striking visuals and clever use of computer graphics to illustrate the exciting story of survival in a world where the monsters merely existed online.

One of the biggest mysteries of the comic was how the even known as the Kill Screen happened, with several hints sprinkled throughout the story. Now, the answers are revealed in this brand new prequel, once again written, illustrated, and lettered by the original creative team. Taking place before the events of The Kill Screen, this prequel builds up to the make-or-break moment that has defined and haunted this comic since the first issues.

The comic focuses on several intertwining stories that all connect to each other in some shape or form, though some are a little vague. The main focus lies with Eva Light, a bit of a politicial hacktivist, who humiliates a politician (who by no means resembles our current Prime Minister) via an altered photograph of her. In a lengthy scene, Eva and her friends get hammered while celebrating their friend Elijah’s apparent birthday.

Their discussion turns to a peculiar purple floppy disk which Elijah has in his possession, prompting Elijah to tell a dark tale involving armed forces massacring a video arcade when peculiar things started happening, while paying homage to the Polybius urban legend. The chilling scene hints at the pixelated horrors to come in the future of The Kill Screen. The “error” was terrible that the military wiped out all witnesses to the scene, including their own men. The floppy disk can allegedly crash and break any computer, but may have a more dangerous purpose as explained between the characters, which would explain the otherworldly effects of the actual Kill Screen.

Eva and Elijah decide to try a little interfacing if you know what I mean, but come morning, the cops have arrived to arrest Eva, though Elijah miraculously walks away. Eva’s police interrogation then takes some rather interesting terms. Elsewhere, an elderly security designer is approached and “persuaded” by some masked men to help them track down a certain vault he designed for unknown purposes. What is inside proves to be quite the eyebrow-raiser. And in a third subplot, a soldier ventures to Afghanistan to rescue a group of captives, though for what purpose remains unknown. His appearance lacks a connection to the rest of the story so far.

Production-wise, the artistry of Joshua Serwell and the writing of Mike Garley shine throughout the comic. Though there is a lack of the digital graphics which drew me to this series to begin with, the character designs and art style are excellent. Occasionally, characters models can look a little different with each panel, but shots that invoke close ups of them really show off the detail of Serwell’s skills. The comic creates a great sense of urgency to find out just what is going on, and ends by dangling a carrot over our heads, inviting us back for more and wanting more answers.

The Kill Screen’s return is very much welcome, maintaining the integral storytelling, thrills, and visuals that made it such a joy to read before. Accompanying the comic is a short story called Nine-Lives, created by Garley and Sherwell, with additional artwork by Alex Diotto, telling the tale of a cat named Nine-Lives, who appeared in the limited series. There is also a fascinating essay written by Shaun Kimber, a scholar and author who discusses the purpose of technology in the horror genre and in The Kill Screen.

Have any thoughts to share on The Kill Screen? Leave a comment below or on our Twitter feed. Be sure to support the comic’s creator on Patreon.