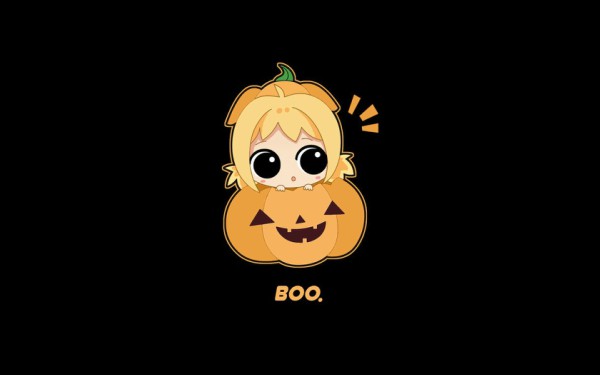 I’ve always loved Halloween. When I was a girl it was for trick-o-treating, alarming amounts of candy, and of course, scary stories. As I’ve grown older I’ve had to leave behind my days of begging for candy, but there will always be always be scary stories. So in the spirit of the weird children we all once were, today I have for you six scary stories for all-ages.*

*Obviously use your best judgement. I was a morbid child and my parents never cared to restrict my reading so please keep that in mind. 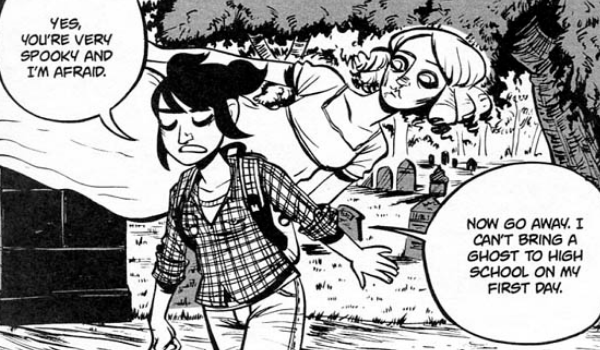 Faith Erin Hicks brings us to the McKays, a large family living in a small town by the shore. The youngest, Maggie McKay is about to go to her very first day of school. Or rather, her first day of public school. In Maggie’s family the children are home-schooled until high-school when they are thrown into the great big academic world. Now poor Maggie has to navigate school all on her own. Oh and deal with a mopey ghost. There’s also a mopey ghost. As much a story about growing up as it is about the dead, Friends With Boys is a gentle, almost melancholy look at loss, family, and the inextricable passage of time.

Hicks has created a charming town of beautiful old houses, weather worn graves, and nautical folklore. It’s the kind of place through which I just long to wander. But along with her lovely setting Hicks also has an excellent grasp of the complicated and often careless ways children interact with one another. The feelings of anxiety, uncertainty, and frantic energy that I so clearly remember from my own youth are here in full force (and trust me, that youth was pretty cringe worthy). Hicks’ graceful, bright style is more than enough to capture bring vibrancy to each and every character, dead or alive. 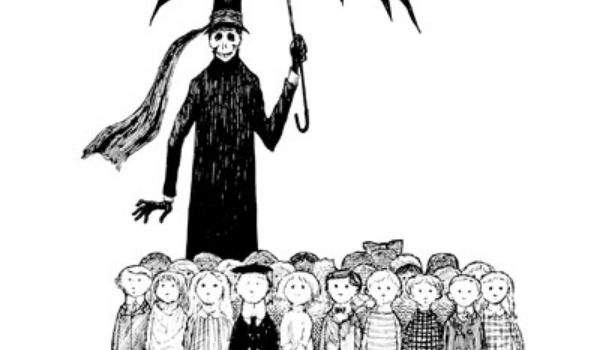 Certainly one of the morbid ways to learn the alphabet, The Gashlycrumb Tinies is perhaps Edward Gorey‘s most famous work. Follow twenty-six children as they die in wild and individual fashion for each and every letter of the English language. Going all the way from “Amy who fell down the stairs” to “Zinnia who drank too much gin” there’s a death for everyone. Even if you’ve already mastered your A-B-Cs Gorey is such to delight.

Written as thirteen couplets, Gorey’s writing flows beautifully from letter to letter making The Gashlycrumb Tinies the perfect book to read aloud (perhaps to your own offspring). And you really have to respect someone with the dedication to create so many unique deaths. Along with his charming prose Gorey’s art really brings his children to…um…life. And then death. Known for his distinctly stylized art The Gashlycrumb Tinies is a particularly enchanting example of his work. 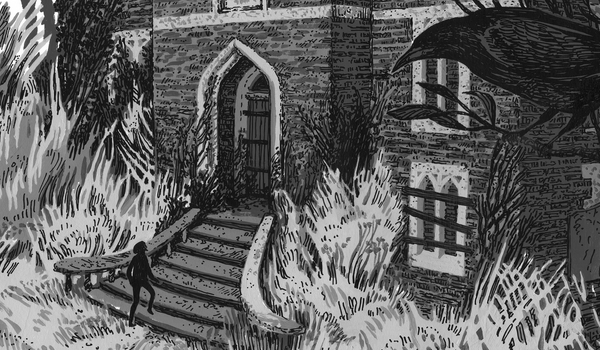 Ella Clarke is a lonely latchkey kid in a new home. Just out the window of her new bedroom is the abandoned Thornhill Institute for Children. With plenty of alone time to gaze out and wander through the ruins Ella eventually catches sight of another child. Interspersed with Ella’s story are a series of journal entries written by Mary Baines, a neglected child from Thornhill’s past. As Ella explores we get to see more of Mary’s (and Thornhill’s) final days. Poor Mary was a strange child with selective mutism and a gift for crafting dolls and puppets. Bullied horribly by the other children and ignored by the adults in her life all Mary wants is peace.

Pam Smy has created a heartbreaking story about what happens to the children society forgets. While Thornhill is a ghost story the most frightening aspects in the form of Mary’s youthful tormentors. Their sadism and Mary’s isolation make for a palpable sense of dread. There were times when I was tempted to regard their antics as over-the-top, but then I remembered some trials from my own youth and suddenly they weren’t quite so easy to dismiss. With the only words coming in the form of Mary’s diary and a few newspaper articles Smy’s art really does the narrative heavy lifting. But with rich, detailed, line-work and soft shading her art is more than up to the task. With winding briars, flickering flame, and half-seen silhouettes Thornhill is positively captivating.

3. The Girl from the Other Side: Siúil, A Rún 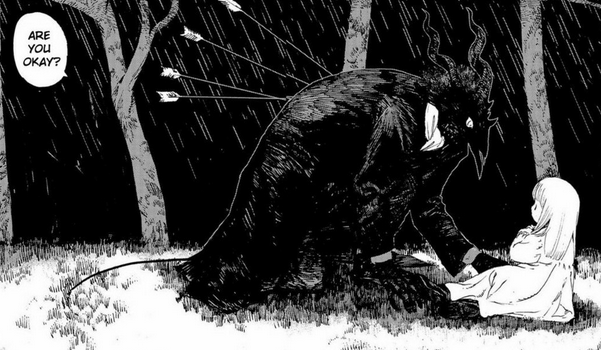 Here to a is a world split in two, an Inside and an Outside. Inside is humanity and the safety of civilization. Outside lies only monsters and wilderness. If an Outsiders so much as touches a human their nature will spread, cursing the uninfected and condemning them to the Outside. And caught in the outside is a small girl called Shiva. Shiva’s aunt left the child in the care of a kind Outsider known only as Teacher. Now he must keep her safe from the horrors Outside as well as the more insidious ones from the Inside.

Nagabe is adept at bringing real tenderness and compassion to his characters. Teacher care of Shiva as a father, and like a father he worries over how much he will be able to (and should) shield her from the world. Though Teacher lacks more of the features we commonly associate with a face Nagabe conveys his emotions with subtly and grace. And beyond our two main characters there is a fascinating fairy tale world. There’s only a myth about how this world split, but beyond that this land is a mystery. Nagabe shows just enough to draw us along through the story and into the unknown. Nagabe’s art is similarly enchanting. Trees, cobblestones, cities, and cottages; all are depicted with delicacy and depth. The high-contrast ink-work further emphasizes the mystery and majesty of The Girl From The Other Side. 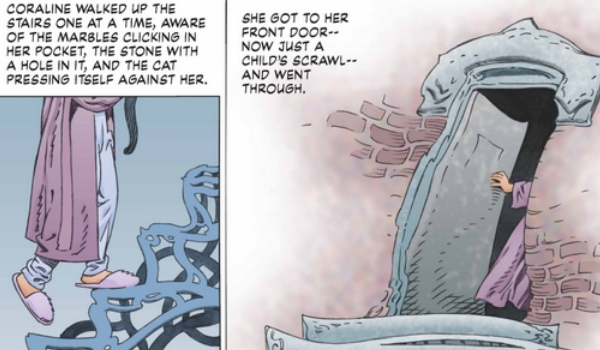 Novel, movie, and comic; Coraline has been brilliant in each and every adaptations. One lonely day the easily bored Coraline Jones finds a little door in her dull living room. Beyond the door she finds a twisted parody of her reality. Here everything is perfect, fun, and beautiful. It’s a fantasy world under the care of Coraline’s Other Mother. The Other Mother seems to know exactly how to make her world the one of Coraline’s dreams. Like any short-sighted child Coraline is thrilled. But the longer she spends under her Other Mother’s care the more Coraline realizes that there’s something altogether more sinister lingering just below the surface.

Following the literally tradition of sending young girls into weird new worlds, Neil Gaiman brings us one of his most unsettling stories. There’s something particularly strange about the world behind the little door. Something about this fun house mirror reflection of a world that makes Coraline the perfect example of the uncanny. There’s something about the Other Mother’s realm that captures just enough of the familiar to set your teeth on edge. P. Craig Russell illustrates with his characteristic elegance and grace. Regardless of whether he’s depicting the world of the Other one, his fluid art and eye for detail are sure to draw you in. 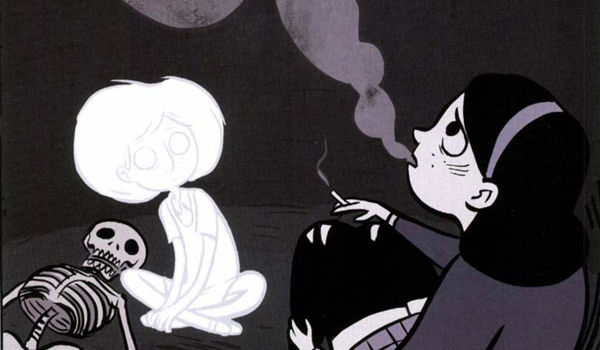 What do you do if you find yourself at the bottom of a well with a ghost? Become BFFs, duh. At least, that’s how things work out for Anya Borzakovskaya when she takes a tumble and ends up hanging out with the long dead Emily Reilly. When she finally gets out of the well, her new friend comes with and asks Anya to solve her murder. Meanwhile Emily is helping Anya in everything from school work to romance. But the longer Emily sticks around the more unsettling she becomes.

Vera Brosgol brings us a story about jealousy, belonging, and the incredible depths of jerkassery of which teenagers of capable. With all the emotional ups-and-downs this friendship between ghost and girl reads as more true than those found in many more grounded tales. Woven through Anya’s Ghost we also see Anya wrestling with an unrequited crush, some desperate attempts to be cool, and her discomfort with her immigrant family. This is a book about ghosts, murder, and mystery, but it’s the emotional heart that sets Anya’s Ghost apart. Brosgol’s simple, playful art further connects us to her cast. Whether depicting Emily’s brilliant smiles or Anya’s exasperated eye-rolling Brosgol’s art is simply a joy.

So if you run out of candy (or just want to teach kids these days the value of a good book) why not run out and pick up a few copies for your local trick-o-treaters? Surely that’s the most practical way to celebrate Halloween, right? Right? Though I suppose you can just read these during the long autumn nights.

Now tell us gentle readers, what comics would you hand out in lieu of candy? Let us know in the comments section below or send us a Tweet!