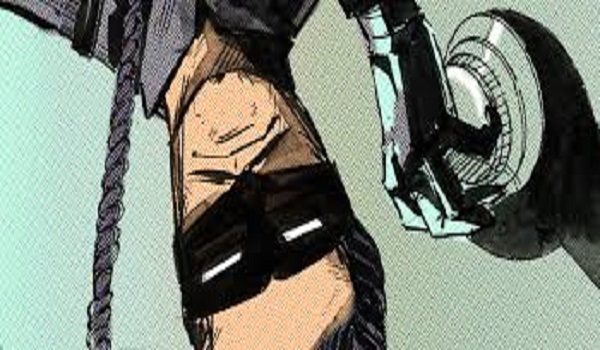 Michael Stark, Terrell T. Garrett, Derek Rodenbeck and their team created this fabulous gentlemen thief story called Wolveron: Thief of Impossible Objects. I read the first issue and I was totally drawn in immediately. Period pieces, meaning set in the past, are some of my favourites.

The story began with an excerpt from the main character Jack Wolverton’s journal. The exposition is a way to look into the main character’s past without much fuss and in a way that made it intriguing. After that, it’s into the comic itself on a ship ravaged by a storm at sea. We are shortly introduced to the lovable rogue, Jack Wolverton, known as the Black Cat (for so many reason I love this name). He’s trying to steal something from the captain of the ship, who dealt in looted antiquities. However, it’s not gold or jewels the thief is after, but the Monkey’s Paw. Yes, that Monkey’s Paw. I don’t know about you but I read that story in high school/secondary school and it still remains an amazing story after all this time. What ensues is a manic mixture of action and magic, climaxing in a cliffhanger for the second issue that’s equally drenched in lovely literary references.

First, this is a well-crafted story that I can wait to see if it actually gets turned into a movie. The setting is several years before the start of the Great War (WWI) and the story is very much for the time. The gentlemen thief had gone out of style over the years, but it definitely made a comeback in this story. As for the art, it’s fantastic—the coloured and the lettering is awesome. The dialogue is smooth and witty. At one time, Wolverton commented on attempting to flee capture, “Always with the running and the chasing.”. It’s not out of place in a Marvel movie or one of those old Hollywood movies. Most times in comics, the narration in the boxes are in first person with the inner thoughts of the main character. I love the narration in third person, here. The third person made it seem like a storyteller is telling the story to an audience and that’s so cool.

My only quibble with it isn’t anything major, because I truly enjoyed Wolverton. The love interest/romantic partner and Wolverton’s relationship from what I’ve seen so far is so terribly cliché. I like to see them mixed it up a bit in future issues, because I’m sure there will be other femme fatale and damsels-in-distresses to try to sway Wolverton or some such.

Wolverton: Thief of Impossible Objects #1 is amazing. I would recommend it to anyone interested in gentlemen thief stories or just plain old adventure stories, like Indiana Jones, but more criminal.

You can grab your copy of Wolverton: Thief of Impossible Objects from the comic’s official website! Are you a fan of the comic already? Sound off in the comments or send us your thoughts on Facebook or Twitter!