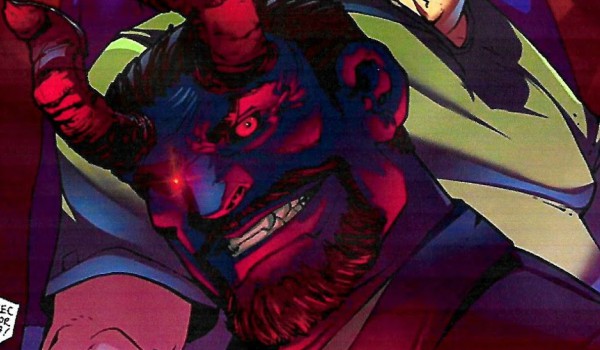 In what will be the, for the time being anyways, finale of the series, creator/writer Frank Martin closes out Modern Testament with its fourth issue. Volume 4 ends the “anthology of the ethereal” in big way, as Death, the Devil, and God Himself all play a role in this final instalment, but the end result feels somewhat lacking overall. The visuals, tone, and individual stories are as good as everything else that Martin and his various artists have put out, but the series lacks a definitive final thought or overall point that it had appeared to be building towards.

The individual stories follow one family as the father makes a deal with the Devil (“Better the Devil You Know…” and “…Than the Devil You Don’t” with artist San Espina and colorist Adri Pratama), a scientist about to announce his greatest discovery (“God Complex” with artist Martin Szymanski and colorist Miguel Marques), and Death as he suffers from burnout (“At Death’s Door” by artist Anthony Pugh and colorist Julian Dominguez). The artwork, by virtue of being the product of a group rather than an individual, spans a spectrum of styles and tones, but favors realism and darker tones as a rule, and is generally excellent to boot. “Better the Devil You Know…” and “…Than the Devil You Don’t” are a fine example of everything this series has been and provide a thought provoking commentary on the nature of free will and sin. The rest are somewhat lacking in comparison.

“God Complex” features the Big Man Upstairs giving a philosophical scolding to a scientist holding a grand conference to announce his latest discovery. The overall theme, that no amount of knowledge will make us into gods, is thought provoking and worth exploring, but the execution is lacking. The artwork is perfectly fine and the esoteric visuals resulting from the demonstration of divine power are well executed, so that isn’t really where the problem stems from. Rather, the narrative fails to give motivations for the characters involved and relies on the “God is actually a d*ck” plot device that has cropped up in works such as Preacher and Supernatural. It’s a bit difficult to discuss without spoiling anything (which I want to avoid since I think you should read this comic, despite how negative it looks like I’m being here), but the narrative goes from “my work in science makes me awesome and special” to “some things are better left undiscovered” with only the barest of plot threads to connect the two points. It’s disappointing, as I’ve frankly come to expect more from the series.

The final story, “Death’s Door”, finishes out the series with the last of the Four Horseman of the Apocalypse, Death, and is the only individual story in the series that I didn’t like. Whereas the rest of the series derived its conflicts and themes from Biblical creatures interacting with mortals, this final chapter features only Biblical characters, and without that interaction the story loses hold of what grounded the moral and philosophical themes enough to properly impact the reader. Here the moral (as in “moral of the story”) falls flat and feels more like an exposition dump than the last word of a series with so much to say.

The art is also out of place, as while it is well executed it is also wrong stylistically for the tone of the series and story. It’s cartoony and less concerned with realism than the rest of the art, which is jarring and distracts from the story rather than add to it or going by unnoticed. On top of that, the series failed to consider the deeper implications of their source material, as each volume has ended with a story about one of the Four Horseman of the Apocalypse without considering what that implies for their narrative, namely some sort of grand revelation. In biblical canon, the Horseman are harbingers, signals that the end is nigh, and by giving each a story in every volume the narrative implied a similar conclusion for itself. It’s such a shallow way to the end the series, and that’s disappointing.

Now let me reiterate that despite the word count dedicated to the negative aspects, this book is worth reading, especially for fans of the series or anyone who likes horror or religiosity. As it happens, the things that are great about this book are the same that were great about the other three, and so would be redundant to cover here. The series is very good, even great sometimes, and this book is good, just not everything it could have been.

That make you want to check the series out? Check out Modern Testament from Insane Comics and follow Frank Martin on Twitter. Did you think I was a bit harsh? Sound off in the comments or send us your thoughts on Facebook or Twitter or hate on me directly @Bard_Brehon!