Home » Lizard Men #1 will Leave Readers Wanting More, in More ways than One 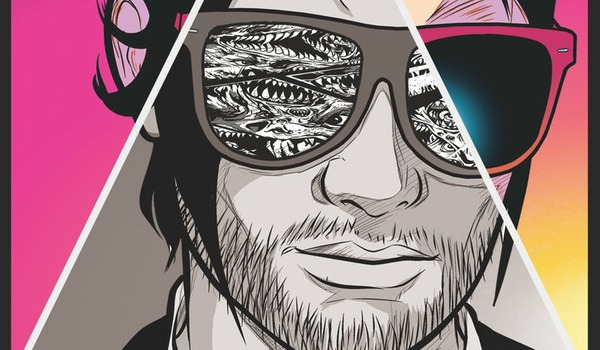 Somehow, someway, we as a society have arrived at a place where lizard people running our world might feel reassuring. Lizard Men, created by writer Steven Horry, artist Catia Fantini, and colorist Chiara Bonacini, is a six-part series following the exploits of an outsider worming his way into politics only to find the swamp is more filthy than he imagined. Not that he gave a damn about draining it in the first place. Lizard Men offers readers a fairly strong introductory issue, though it’s not without its faults.

Lizard Men begins like life itself – with someone from an entertainment background who in no way should make decisions for others. Former rock-star Dylan Zamani shocks the world by becoming the new prime minister of Britain. He wins on a platform of optimism, hope and brashness arguably not suitable for public office. While some of Britain’s citizens rejoice, two mysterious white-suited weirdos see the Russell Brand look alike as a shiny opportunity. When they introduce themselves to Zamani in a moment of meditation as “translators,” they lay down the law. He’ll be the puppet, while the two suited gents help pull the strings to a sinister race of lizard people.

Story-wise, there are a lot of admirable elements playing in Lizard Men, although at times, these positives aren’t entirely gold. Mr. Zamani himself is an intriguing protagonist; I have my suspicions he’s literally Russell Brand in a comic book. Once your mind goes there, it’s hard to break away from that comparison. That being said, beyond the flash, there’s not too much substance lurking beneath the surface of this character. In comparison, the other characters in the comic are very much one dimensional at this point. It also would have been nice to see these lizard people, especially because they’re the titular characters. Alas, we the reader only get snippets, which is understandable for the first issue. 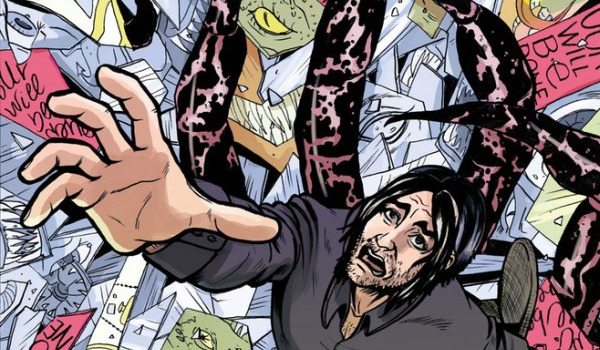 Additionally, Horry does a good job of building the reader’s excitement of the lizard people. After all, if they’ve been able to secretly rule the world for ages, they must wield some power. So, it’s a bit of a disappointment their first move of regaining world domination through Dylan is by punching him. And not just that, but with a huge hand that’s shrouded in a green backdrop. It instantly made me think of the Green Lantern film climax. Nothing should ever make me remember that moment.

Artistically, Lizard Men is aesthetically pleasing and the artwork is perhaps the cleverest aspect of the issue. The artwork and colors work in tandem to give this comic a rock and roll look to match its lead. Fantini and Bonacini push this concept further with an old-fashioned design, again, like its lead character. Even the graphic featured above aids the comic in introducing the horror and confusion Zamani unwittingly walked right into. Yet, this slightly contradicts the tone of the comic. Or even the comic hasn’t decided what it wants to be – a satire with its obnoxious, over-the-top “hero” or a science fiction horror comic.

I would compare Lizard Men Issue #1 to an episode of Black Mirror entitled “The Waldo Moment.” Both properties capitalize on the dysfunction that is unfortunately very real with many of our world leaders. Both feature a boisterous protagonist and an undercurrent of how bizarre the world is now. This first issue of this comic is fairly strong. With only five more issues to go, Lizard Men must quickly find its identity and stick with it. Most importantly, it left me curious as to what was to come next for Britain’s new Prime Minister.

Have the lizard people commanded you to read Lizard Men? Do you think they would go through with Brexit? Did they start Brexit? Discuss in the comments or send us your thoughts on Facebook or Twitter!