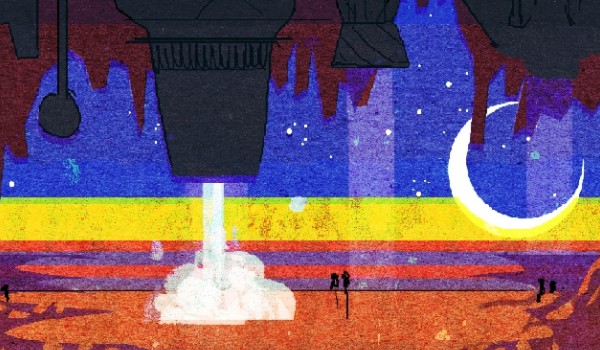 “Fantasy stories told in the form of haiku and abstract paintings” seems like the kind of thing that would be assigned in the most pretentious of all lit classes, but under the skilled hand of creator SSCR it became something unique and interesting, if maybe not for everyone. Oh Hai Ku pairs together haiku with a corresponding that further fleshes out what was going on in the poem to form a one-of-a-kind storytelling experience.

The individual haiku are all set in the same sci-fi/fantasy world, with even a recurring character or two, but the overall story is, out of necessity, pretty barebones. These are stories in the same vein as those two-sentence horror stories, they’re short and to the point but lack enough room for long form character development and plot threads, and the work as a whole would almost certainly suffer if these elements were somehow added. As it stands, the series invites the reader to imagine a world beyond their own, and does so better than almost any comic, be it indie or mainstream.

Where the series shines is in its artwork. The gorgeous paintings combine elements of watercolor, comics, and abstract paintings, and a trained eye will spot influence from Celtic art, Mayan and Aztec, and just about every European movement since the Middle Ages. They can be macabre and morose, frequently very bizarre, and sometimes grotesque or disturbing, but they demonstrate a level of talent that is rarely seen in the sci-fi and fantasy world, however odd or off-putting, they sync perfectly with the poems to create a coherent plot. It’s different, but it works.

However as all of that would suggest, this comic is not for everyone, but it’s definitely worth a look. As it happens, the entire series is available primarily through Instagram, and is thus free. The entire collection can be read in less than an hour, and I recommend, in the strongest possible terms, that everyone check it out on Instagram or on Tapas if you’d prefer.

As for you, dear reader, sound off in the comments or send us your thoughts on Facebook or Twitter! Also I’d love to hear your fantasy and sci-fi haikus @Bard_Brehon