Home » Breaking from Tradition, Comichaus #4 is a Raw, Intimate Affair 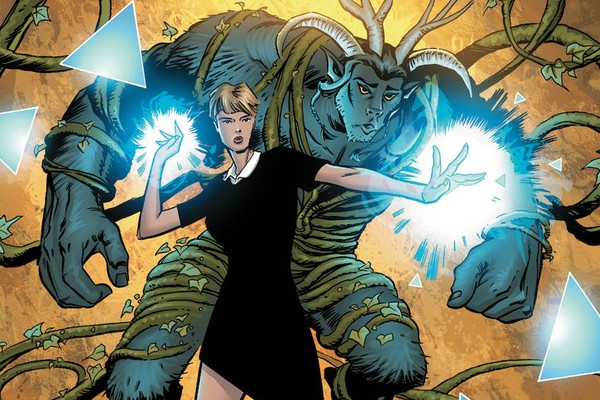 I’ve yet to find fault with Comichaus‘ serialised sense of menace. It’s strips are hungry for action and drama, yet their broken-up execution gives the comic an underlying tension that ripples from issue to issue. We’ve now reached #4, and here, I feel like that snarling danger has been but aside for a more tender idea. Throughout the anthology’s fourth issue, the theme of broken relationships plays throughout the majority of its strips. Feather, Chalk, Morality and Troubleshooters play with this idea to heart. Not all of them succeed in doing so, but going in such a direction feels like an unexpected tonic to Comichaus‘ routine delivery.

Kicking things off is the second chapter of Chalk, a cryptic fantasy tale who’s premise of a sudden epidemic of localised suicides leads spell-wielding Jacqueline into action to uncover the mystery has lost none of its potency. Its plot propels further, expanding on Jacqueline’s own backstory, hinting at a troubled past that’s linked with another magic-user, Iblis. Personifying Comichaus‘ short, sharp motif, we jump across multiple timelines revealing in Jacqueline and Iblis’ past as they’re shown to be impervious to the effects of time. Such a tactic in narrative propulsion is right at home in Comichaus, short, punchy delivery.

Troubleshooters however is becoming diluted. The notion of relationships torn beyond repair is as prevalent here as it is elsewhere in the issue, but the strip is becoming mercilessly bogged down in its own mechanics. We’ve now shifted our focus from outlaw bandits forced into a situation beyond their experience to some teeny-bopper-esque romance drama. The story still rattles along at a decent pace, as Grossbeak and Drongo continue to uncover more hometruths about the corrupt nature of their employer, but when reading this latest chapter there’s an unshakeable desire to see this strip unbox itself and explode into the action-adventure it’s built itself up to be. A continual saving grace is Ed Bickford‘s marvellous artwork. It’s grim, bursting with thick, messy shadows that perfectly compliment the western premise and brings this more intimate chapter to life. Even if Troubleshooters is now proving to loose its narrative heft, it remains a joy to simply look at.

Feather continues its steady evolution of bringing its past and future worlds together, connecting them with the emotional fallout of its lead characters, Sally and Doug. What makes Feather a continually hooky read is not just in its fusion of pre and post-apocalyptic worlds, but HOW it blends the two together. Without warning, we’ll shift into the future of Doug and Sally’s broken relationship, as their marital status fails to survive the deadly outbreak of bird-flu that sweeps their hometown.

There’s payoff in the fallout too, as we see Doug and Sally’s post-apocalyptic personas shine through. Doug’s metamorphoses into a winged humanoid and Sally’s now military-like attitude may come off as a less-than-subtle metaphor for their incompatibility in this post-bird-flu world, but it’s terrific fun to see Feather evolve with its plot like this, especially since we now spend much more time in the post-apocalyptic world rather than addressing Sally and Doug’s breakdown in the past. That’s now in the can, and it’s time for the war to begin!

Elsewhere in Comichaus #4, strips that have been a mainstay since #1 now reach their conclusion, i.e. Morality and Suited and Booted. Morality hasn’t been the most engaging of strips we’ve seen in this comic so far, but now that it’s reached its finale, we can look back and appreciate it’s economical artwork and playful if simple take on the afterlife concept. More blitzkrieg in its nature is Suited and Booted, who’s explosive last chapter brings this nifty 2000 AD-esque blast of sci-fi action to a rousing close.

Comichaus‘ fourth outing is a curious break from tradition. It’s overarching theme of character fallout may be simply a coincidence, but nevertheless, it feels like it’s there and in doing so unifies the majority of the strips to varying effects. Because that theme doesn’t translate well across all involved, there’s a disrupted flow to the issue, despite that thematic connection, which ultimately makes for a jagged read.

Have you dived into the mad worlds of Comichaus yet? What do you make of this anthology? Let us know in the comments section below or send us a Tweet! You can also discover more about the anthology and app!