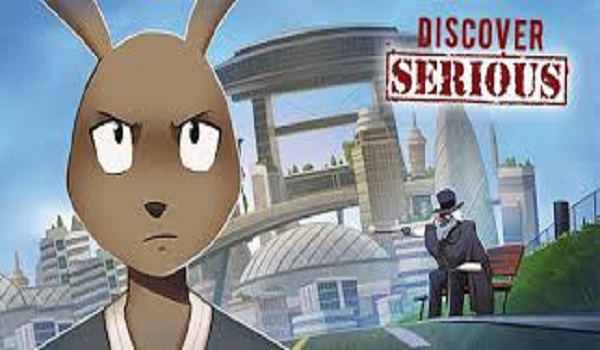 Serious Volume 1‘s cover does not at all hint what are inside the pages of this comic. Created by Mayamada and Pinali, Serious is set in a world of anthropomorphic animals. It’s far less silly than you are thinking. Serious was inspired by Japanese anime/manga, so the art style is similar to a lot of those manga.

The story is centered on a rabbit named Blake. At the start, he is a teenager. He and his friend Cassidy are cell-phone case hustlers, out to make some money. The strip/town of Severton is a poorer place than other strips. They do okay, but then Cassidy, whisked away to the Jungle to a better life, and Blake is left heart-broken in many ways. After a conversation with an old animal, Blake goes to find a businessman named Nova in other strips to get a new partner and a better plan. The comic continues with their business exploits in some unexpectedly violent fashion, but it IS literally the cut-throat world of business.

Serious Volume 1‘s premise was simple and neatly executed. A poor kid wanting to improve his/her life by starting a business has been done before, but it’s a story that no one should get tired of hearing. I like the art style, since I’m a big anime/manga fan myself. Also, I like that coffee/caffeine is like an illegal drug, I find that interesting. I wonder why, though?

Blake is a sympathetic character to point. He is a determined bunny, but gets discouraged and angry instantly when it concerned Cassidy that made it obvious that he was in love with her too.  But other than that, the characters are very stereotypical and don’t have much depth. I’d like to see more character development for Blake and his company.

Though, I have one major concern. Do the police even matter? They showed up early in the comic to arrest some gang members, but there’s a ton of violence and gang-related things going on throughout the comic, but the police presence is very low. How much of the violence and illegal activities are intertwined with legit-businesses in this world? There’s a lot of questions I have.

Are you a fan of Serious? Let us know in the comments section below or send us a Tweet! Check out more information about the comic and products based on the comic at www.mayamada.com.