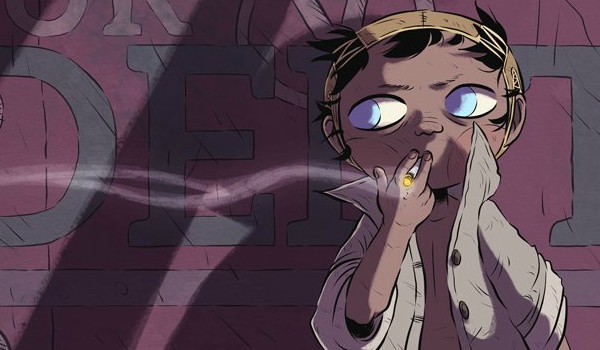 Boum‘s A Small Revolution is small in every sense of the word. It’s a brief tale of a tiny child performing small acts to try and improve the snapshot view of the world around her. It looks small too – the artwork is minimalist in detail and executed in black-and-white. Boum’s heart-wrenching tale of Florence’s efforts to find her place as a revolutionary in a dictatorship may be lacking subtlety in conveying its message of how small acts of heroism can result in gargantuan ripples, but its crisp pacing and confident story-telling makes it a chilling read.

Florence herself is a delicate mixture of socialist ideology and doe-eyed innocence. It’s her resolve for a better tomorrow that drives the comic, resulting in Florence pushing herself to achieve this goal, but at the same time being pulled away from such dreams as a handful of tragedies unfold throughout the comic. We’re given this well-tuned sense of hope and desperation at odds with each other, a clash of perspectives with no happy resolution.

What’s particularly striking about A Small Revolution is its simplicity, both in its story-telling and artwork. The story escapes from becoming bogged down in complex ideologies from either side, whilst the characters’ faces are adorned with circular patches on their cheeks, as if they’re meant to be toy dolls with rosy cheeks. The black-and-white appearance of A Small Revolution therefore impresses upon us that everyone in this comic, from dictator to revolutionary, has had their innocence erased.

Boum doesn’t skip on quality with the comic’s appearance. If A Small Revolution is anything to go by, she’s a great believer in a less-is-more mentality. Our characters may exist in a crushing, colourless existence, but Boum has a masterful handling of letting the character’s equally minimalist expressions convey the story’s emotions. Angst, love, terror and hope are all telegraphed through precise movements of eyebrows, lips and eyes. It’s a handsome companion to the comic’s sketch-like nature. The back cover of A Small Revolution states that the comic is ‘recommended for all ages’, illuminating its tender nature. Such a statement also makes sense of the comic’s simple feel – it’s delicate heroism ensures that young readers can find it easy to access.

A Small Revolution is a small tale with big ideas behind it, but those ideas are executed in such achingly innocent fashion that it’s hard not to get swept along. Florence’s determination for a better tomorrow leads to a rousing finale that radiates a sense of hope, but is undercut with a sense of tragedy that stems from the sacrifices she must make. A finely-tuned snapshot of resourceful yet tragic heroism, A Small Revolution is highly recommended.

You can discover more about A Small Revolution from Soaring Penguin Press. Are you already a fan of the comic? Let us know in the comments section below or send us a Tweet!