Home » By Complicating its Own Metaphor, War for Kaleb #2 Soars to New Heights. 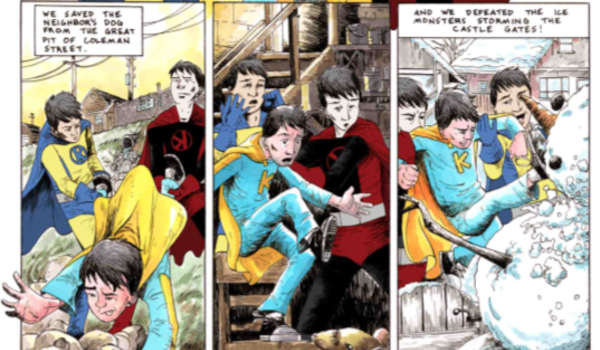 The War for Kaleb #2 is a comic that takes risks. The powerful metaphor established in the first issue, that of mental superheroes representing internal struggles took that issue far, but creator Jason Pittman is not content to stay just in that space. With his second issue, The War for Kaleb expands and twists its own metaphor, muddling cause and effect and musing on our relationship with memory. Kaleb’s heroes move from unmentioned metaphor of his anxiety to vivid remnants of an imagined past. This, and additional agency on the part of Addison, move the narrative in new directions and set up an explosive third act to come.

Picking up a few days after Kaleb’s breakdown on the train, Issue #2 commences with a lunchtime conversation between Kaleb and Addey. Illustrated in vivid color, Kaleb recounts his childhood fantasies of super heroism and the costume his mother made to express those dreams. In this scene, the imagery of imagination feeling more real than life returns again. Kaleb’s anxiety emerges after reality and fantasy collide. Attempting to wear his costume to school, he is widely ridiculed, and retreats within himself. What is different is that the two heroes we saw in Issue #1 change from abstract metaphors to concrete characters, now imaginary friends that Kaleb interacts with in his superhero fantasies.

This is a brilliant move on Pittman’s part. Kaleb’s abandonment of his heroic persona and fantasies signals the end of innocence and the beginning of an elemental anxiety. But these fantasies do not want to be forgotten, with the black suited hero leaving in a huff. The yellow suited hero remains, fading away gradually. As Kaleb takes his medication for the first time and lets go of his fantasies, the art washes out from vivid color and back to monochrome. It is a touching, melancholy scene. 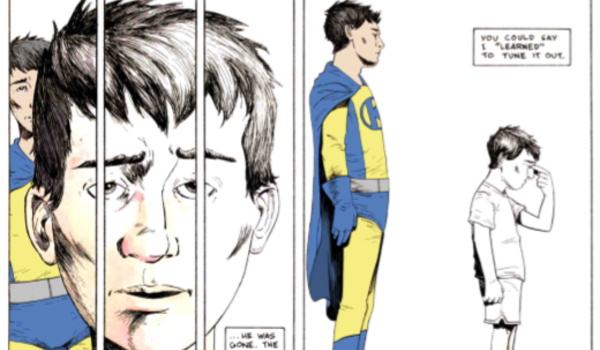 Addey’s response to Kaleb’s story also provides an emotional moment. It not only shows her care for Kaleb, but the way the things he hides lurk just under the surface. “So, you weren’t bullied anymore?” she asks. “I was still teased” he replies, “It just didn’t hurt anymore.” When she presses further asking “how do you block emotion out like that?” he changes the topic. Addey’s characterization here does not go as deep as it could, but their conversation is one that people with mental illness know all too well. Addey’s inability to figure out Kaleb’s disorder is, at face value, a little surprising. But Pittman shows her as an earnest, caring person, and one who would trust the man she loves to open up to her.

The War for Kaleb #1 ended with a breakdown caused in part by Kaleb’s inability to deal with the worlds constant sensory output and his own muddled feelings. The crisis of Issue #2 comes from a similar place, but focuses more deeply on how complicated communicating can be with a mentally illness. At work, Kaleb lashes out against an annoying coworker as the black suited hero punts the yellow one through a cubicle wall. This emboldens Kaleb and we see the darker side of his heroic fantasies coming to the forefront, standing up for himself becomes a by word for aggression.

This is further driven home during the next scene at a bar, where, when a racist drunk hits on Addey and calls her a “black bitch”, Kaleb retaliates physically, beating the man up in a fight sequence mirroring that of his superheroes. But in this fight, it is the yellow clad hero who wins, not the black one. This complicates the easy metaphor that the heroes previously inhabited. Kaleb’s negative impulses come unmoored from the black suited hero and now seem to inhabit both. Dwelling in the head and refusing to engage with those around you becomes the story’s true villain. 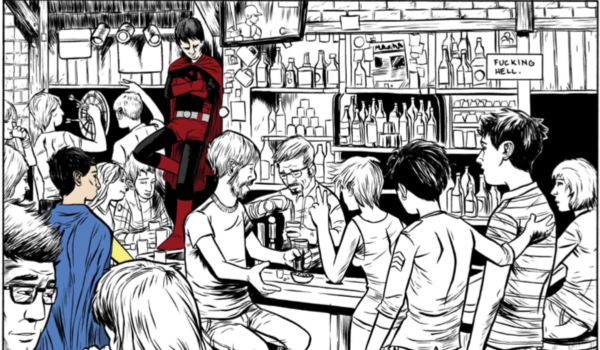 Even then, it is still not so clear cut. A major factor in Kaleb’s outburst at the bar is his friend’s decision to take him to a loud, foreign place, despite his difficulties with them. Pittman subtly begins to show us how the people who love Kaleb can forget his needs. Often they see past him, mirroring the same way Kaleb can be blind to them. Issue #3 promises to go even further into this. I won’t spoil the ending of the issue, but it is heart wrenching and perfectly sets up the final act.

In terms of its art, The War for Kaleb #2 builds on its predecessor in the best ways. Pittman uses his panels and gutters to cut scenes in a playful and clever way. The bar scene and the opening childhood sequence are especially good examples of this. Though the spare use of color is part of the series’ charm, when Pittman does use it he uses it expertly. The opening sequence is gorgeous, full of the bright colors that children seem drawn to, like baby blues and hot reds. The faces are emotive, the interplay between the fighting heroes engaging, and the emotional drama exciting. Only someone looking for a bone to pick could find one in this issue.

In every aspect, The War for Kaleb #2 is an improvement on an already stellar original. It escalates, complicates, and deftly prepares for the story’s finale. It is bittersweet then, that Issue #3 will be the last for this extraordinary comic.

You can find The War for Kaleb on Jason Pittman’s website here! What do you think about the second issue? How would you like the series to culminate? Sound off in the comments or send us your thoughts on Facebook or Twitter!