Home » 6 Reasons Why the Venom Movie May Not Actually Suck 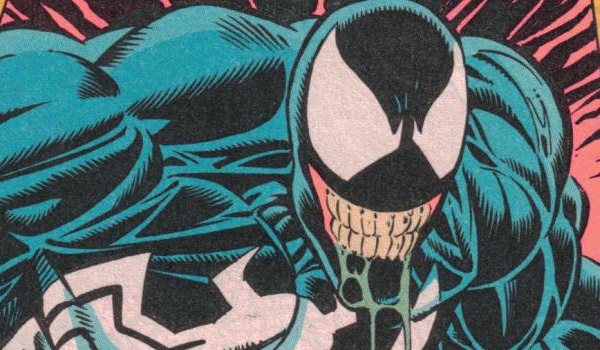 Like many Marvel fans, the announcement that we were getting a solo Venom movie starring Tom Hardy as Eddie Brock made my heart jump for joy (remember how you felt when you heard Marvel bought back Spider-Man), only to feel it cringe back into my chest upon learning that not only would the film be produced by Sony, who still owns the rights, but that Tom Holland’s Spider-Man would not be making an appearance. Sony’s mishandling of the Spider-Man mythos is infamous, not just because of the mediocre Amazing Spider-Man, but also the leaked emails detailing their insane plans for their Spidey franchise, including having Spidey take off the symbiote suit because the Sinister Six “think it’s lame” . The trailer looks less than encouraging, with a pretty generic action movie format. However, hope is not lost for us fans of Venom. Here’s some reasons that the Venom movie might surprise us.

6. We Need Superhero Movies Without a Huge Universe 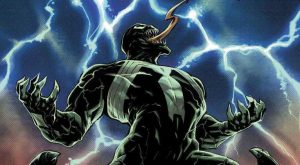 Don’t get me wrong, I love the Marvel Cinematic Universe. It is amazing that Hollywood is finally able to make movies that match the complex universe behind comic books. As for DC… well, they’re trying their best, poor little high-powered Warner Bros executives. But hey, Wonder Woman kicked ass! In general, though, cinematic universes can get exhausting. DC is a great example is a great example of trying way too hard to churn out interconnected films that don’t stand alone very well, and suffer for trying too hard to be interconnected. Similarly, The Mummy tried to launch Universal’s “Monster Cinematic Universe” and fell flat on its face as a result. Even Marvel has suffered somewhat lately from the effects of its movie universe – recently, the best Marvel movies have been those that mostly live in their own narrative world – Black Panther and Thor: Ragnarok.

Now, I know that Sony is claiming that Venom will launch their own Cinematic Universe, basically made up of all the leftover Spidey characters that Marvel still doesn’t have any claim over, but that pretty much just leaves them with Black Cat, Silver Sable and a bunch of Spidey villains. And… there’s not a lot of places they can go with that. My point is, there is very little way that Sony can interweave teasing a Cinematic Universe into this film, and that’s great. It means they won’t get sidetracked trying too hard to build a universe, and can focus the movie on actually telling a story, instead of making it a long trailer for future crossovers (part of why the Wonder Woman movie was so good). There are also reports that Tom Holland may appear in Venom briefly as Peter Parker, so Sony may be realising their folly and jumping aboard the Marvel train. But Sony seems to be approaching the movie from mostly outside the MCU, giving them a chance to tell a new, fresh story. 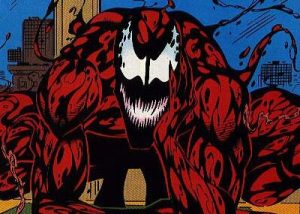 This may be reaching into the rumour mill, but it seems to be some of the more reliable buzz about a movie that has been kept surprisingly well under wraps. Although Woody Harrelson is on the Venom movie cast list, his role has been kept blank. It is reported that he was cast as a “henchman”. The internet is abuzz however, with the idea that Harrelson will actually appear towards the end of the movie or in a post-credit scene as Cletus Kasady, aka the supervillain Carnage, a serial killer who bonded with an offspring of the Venom symbiote.

Carnage is meant to be a more evil version of Venom, and if portrayed well he would be an exciting character to see brought to the big screen as a villain in a later Venom film, or maybe a Spider-Man movie is Sony does join up with Marvel. In any case, Harrelson is a delight to watch, especially when he is acting somewhat unhinged, and he seems like an excellent choice to play a more evil counterpart to Tom Hardy’s morally challenged, but ultimately good, anti-hero. Even if Harrelson really is just making a cameo, it can almost certainly be said that Carnage will be introduced in Venom, although he will not be the main villain. 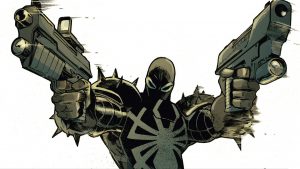 In Marvel Comics, Flash Thompson started out as Peter Parker’s high school bully. After joining the military, Flash became a war hero, but tragically lost his legs. He was given the chance to walk again after joining a secret government program that bonded him with the Venom symbiote, turning him into the heroic Agent Venom. The symbiote soldier is one of my personal favourite characters in Marvel Comics. Admittedly, the upcoming movie is about Venom, with Eddie Brock as its anti-hero, not the heroic Flash Thompson. However, leaked Sony emails reveal that the people behind the movies were interested in the character of Agent Venom, who admittedly is easier to write as the star of a film instead of an antagonist. And details in the trailer hint that that the film’s origin story has Brock suffering a great physical loss that lands him on an operating table, and seemingly has the symbiote bonded to him by some sort of super-soldier program.

With a set-up so similar to that of Agent Venom, it is possible that we may be seeing aspects of the Agent Venom character added to the Venom movie. There is certainly at least one motorcycle chase scene in the trailer, something that could be nod to Agent Venom, who often prefers motorcycles to web-swinging and once even stole Captain America’s motorcycle. 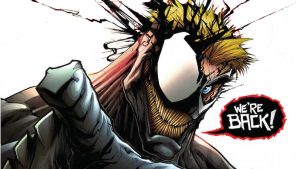 One of the most interesting things about Venom as a protagonist is that his character description reads more like a horror movie monster than anything else. His powers come from an alien that bonds with him, usurping his mind and identity so that the simply unlikable Eddie Brock is warped into a truly evil monster. Venom looks like a monster, with his hulking frame, razor teeth – he has been known to eat people – talons, and ability to change his shape at will. As his character has developed, Venom has become more heroic when Eddie’s humanity has come to the forefront, but Venom lives in a constant inner dialogue between the host and the symbiote. And the more monstrous side of the symbiote will hopefully be put on display with the movies likely R-rating.

Adding to this horror-movie hope is the director, Ruben Fleischer, best known for the excellent horror-comedy Zombieland, which blends horror with the humour that superhero films have become known for, and the crime movie Gangster Squad, showing his ability for gritty, violent action. He is also slotted to direct a movie titled only Jekyll, about the last living descendant of the infamous Robert Louis Stevenson character Dr. Henry Jekyll and his evil other personality Edward Hyde. Although this last credit is still in pre-production, it is promising that the director of Venom, a film about a man with an vicious alter-ego, is working on a movie about the most famous story of deadly personality shifts.

2. Lethal Protector and Planet of the Symbiotes 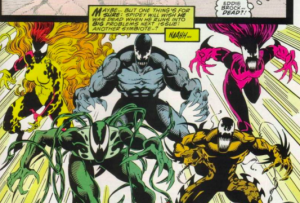 Sony has confirmed that the Venom movie will be based on two storylines that feature Venom as an anti-hero: Lethal Protector and Planet of the Symbiotes. These storylines both feature a lineup of other symbiotes, who are created during the Lethal Protector as “spawn” of the original Venom symbiote by an evil corporation called the Life Foundation. This seems in line with the sinister-looking scientists and businessmen we see in the trailer.

All of the symbiotes are variants on Venom with their own specialties; Phage formed his costume into long blades, Riot preferred blunt objects and moved faster than the eye could track, Agony absorbed chemicals and spat acid, Lasher manifested long tendrils out of his body, and Scream used long hair tendrils like Medusa and could manifest a sonic knife in later appearances. Hopefully we will see this lineup of awesome symbiotes as antagonists in the new Venom movie. If I were to guess, Eddie Brock, who is a disgraced journalist in the comics, will be sent to investigate the Life Foundation, or some equivalent, and these events will lead to his being bonded to the symbiote and then escaping. But that’s just a guess. 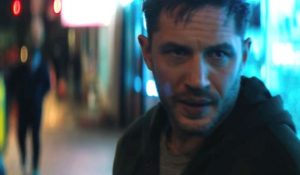 The best thing that Venom has going for it is its star. Tom Hardy https://www.imdb.com/name/nm0362766/ is well-known for his ability to bring complex, often unsavory characters to the screen, with powerful results. His repertoire is mostly composed of anti-heroes and villains, giving him the perfect background to take on the mantle of the symbiote. And if you’ve seen any of his movies, you know that Hardy commits hard. Between his roles as the insane and high-octane Mad Max, the unstable criminal geniuses Charles Bronson, Bane, and both Kray twins, as well as his Academy-Award nomination for playing the selfish and villainous John Fitzgerald in The Revenant, the movie that ended the era of “Leonardo DiCaprio losing the Oscar” memes. This range of evil and insane lends itself well to Venom, a character who is constantly waging an internal battle between symbiote and host, as well as Eddie Brock, who in the comics is generally portrayed as angry at best and a complete slimeball at worst.

What do you think? Are you excited for the new movie for any reasons I missed? Do you think it will be a dud? Or are you just excited to see Venom in his own movie! Sound off in the comments or send us your thoughts on Facebook or Twitter!