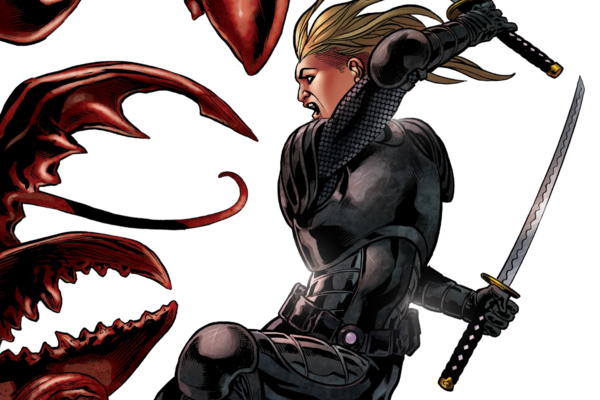 Comichaus #5 is another fine example of the comic seamlessly closing the door on certain strips and opening the door on others. How it begins and closes these worlds and characters however fluctuates in quality. The Troubleshooters, a strip that’s been a consistent highlight since its debut, receives a mid-season finale that continues to swing the focus of the comic away from badass marauders into awkward teen soap opera that’s less than enthralling. Two new stories kick off in Comichaus #5, the all-ages-esque action comedy Mandy the Monster Hunter and the well-crafted atmospherics of Cold.

In-between these beginnings and endings, Chalk and Feathers swell with grandeur as both expound upon their respective worlds to riveting narrative satisfaction. Chalk‘s ambition is worthy of the tip of a thousand hats. Fusing mystery, horror, romance and an added dash of time travel, this fourth instalment stitches together the events of the past three issues, revealing the backstory and reasoning behind Jacqueline and Iblis’ relationship. The two time-hopping ex-lovers have converged in present-day London after a series of inexplicable murders brings them together unexpectedly. This latest chapter doesn’t reveal everything that’s yet to be told, following the pattern of each past instalment, but it does build on those past chapters and is all the more rewarding read for it, as the two are forced to encounter each other’s existence once more. It’s proving to be Comichaus‘ most cryptic read so far, but Steve Horray‘s script coupled with his inking skills, penciller Catia Fantini and letterer Colin Bell make for a cohesive team.

Feathers on the other hand boasts little subtly, but that’s no bad thing. Reflecting the expansive attitude, Dave Cook‘s rapid-fire story-telling and Norrie Millar‘s potent, immediate art work signal the coming of the apocalypse for our estranged husband and wife. Equally chaotic is The Troubleshooters, but its far less engrossing. When The Troubleshooters began, all the way back in #1, it told the story of two gunslingers wandering into a near-future civil war, in which both sides attempt to lure them into their ranks. In #5, the strip comes to a temporary close, and does so by shifting the focus wildly to weak teenage angst-ridden drama. Doing so builds on the strip’s world, but teen romance isn’t what I come for when wanting to enjoy this bizarre, post-apocalyptic wild western. Ed Bickford‘s smokey, greased-up artwork manages to remain a delight and stands as one of the few consistent things about the comic.

Joining Comichaus‘ ranks is the light-hearted Mandy the Monster Hunter. Its first chapter has a back-to-basics feel to it that stands at odd with the ambitious Chalk, and that’s not the only aspect of Mandy the Monster Hunter that makes it distinctive. As mentioned, the strip has a strong all-ages feel to it, evident in its basic story and vibrant artwork courtesy of Vince Hunt, creator of The Red Mask from Mars. The strip’s youthful mentality feels out of place in Comichaus, an anthology that’s prided itself on the weird and the grotesque. Still, this is only the first instalment.

Another new strip receiving its start here is Cold, the brainchild of Blue Fox Comics alumni Simon Birks and Lydon White. Cold‘s deliberate atmospherics feel far more at home than Mandy the Monster Hunter and hints at quite a subversive read. It’s rather minimalistic in story and art, adding to its quiet charm. This first episode opens with a seemingly mundane journey for a young man to his boss’s house with the hopes of a promotion climaxes in a freakish act of nature. The stripped down nature recalls past glories of Comichaus so far, adding to its sense of thematic comfort as it snuggles seamlessly into the world of the anthology.

Overall, Comichaus #5 is a jumbled yet enjoyable experience. What some strips lack in quality newer titles make up for with dynamic story, pacing and visuals. It’s disappointing to see The Troubleshooters drag itself to such a limp conclusion, but Cold, Chalk and Feathers promise to be the highlight of future issues.

Are you following the weird and wonderful adventures in the Comichaus anthology? You can discover more about this particular issue from Comichaus themselves. Don’t forget to check out the Comichaus app too and discover a world of comic book goodness!