Home » Charming Surrealism Makes Magritte: This Is Not A Biography A Delightful Tribute 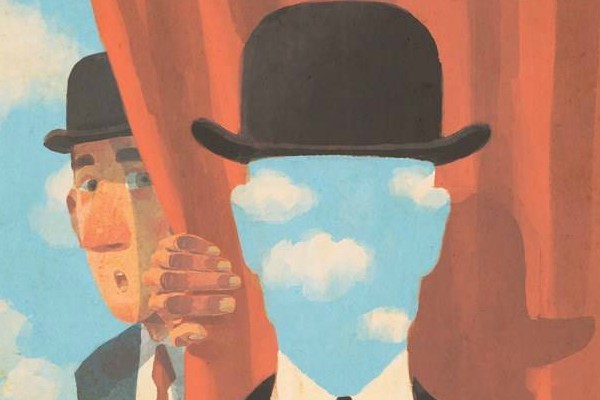 A characteristic of SelfMadeHero’s Art Masters comics is how their respective creators emulate the style of the artists who’s life they’re illuminating. Employing such tactics ensures that those books have a certain visual thrust, utilising often surreal styles to bring these surreal people to life. Some engaging, quirky narrative styles arises with these books, but the danger they often face is emphasising style over substance. Vincent Zabus and Thomas Campi‘s Magritte: This Is Not A Biography is a comic that takes numerous wobbly steps over that line, offering a fresh, lithe appearance that tips the hat to Rene Magritte, and ultimately concludes as a satisfying read.

Where past Art Masters books took advantage of invisible, omnipotent narrators to propel the story along, Magritte: This Is Not A Biography detaches itself from the pack with its lead character, Charles Singulier, a city-going gent who’s a pastiche of every bumbling, good-natured P. G. Wodehouse character who’s attempted to avoid forced marriage at the hands of overbearing aunts. His acquisition of a bowler hat, once the property of Magritte himself, leads him on a journey of charming surrealism as he learns the story of Magritte. This is where the comic opens up its deceptive yet easy-going narrative ploy of Charles’ ignorance of Magritte transforming into being fed his life story, thus letting the comic’s autobiographical nature shine. If Charles fails to uncover all he can about Magritte, he’ll never be able to remove the bowler hat. It’s a rather whimsical way of telling your character, and your audience, the life story of your subject matter that encapsulates the offbeat loveliness of the comic.

Campi’s artwork is a tour-de-force of handsomely playful homage to Magritte himself, enabled by Zabus’ quickfire story. No sooner has Charles unlocked one fact about Magritte, which is of course illustrated in the same surrealist style of Magritte himself, than it’s time to unbox another. Despite filling the comic with as much dexterously colourful art, complete with numerous references and cameos from Magritte’s work, Magritte: This Is Not A Biography never feels forced or rushed. As a homage to the artist himself, Magritte: This Is Not A Biography takes a simple premise and runs with it as far as it can.

A theme that runs through the story is how Charles’ unexpected excursions into these fantasy landscapes is that of exploring locales, feelings and desires away from the tangible world and into something that perverse that material world. Indeed, Magritte: This Is Not A Biography never stops venturing into these worlds of Magritte’s invention. It’s as if the comic uses this theme as a platform to produce a gently captivating portrait of the artist.

Magritte: This Is Not A Biography fits comfortably with SelfMadeHero’s other titles in its Art Masters series, but it’s quirks are all its own. The comic cements itself is a breezy, lovely encapsulation of Magritte’s life and winds up a curiously cute read in its own right.

Are you a fan of either the comic or the artist? Let us know in the comments section or send us a Tweet! You can discover more about Magritte: This Is Not A Biography from SelfMadeHero.