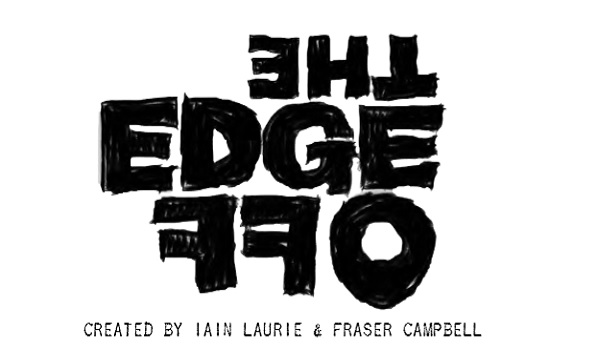 Greetings comic book lovers! You may have noticed that there are quite a few awesome comics being featured in our Kickstarter Korner this month, and we’ve been chatting with some of the creators and trying to get into their brains! Well, at least that’s what I’ve been trying to do (writer denies accusations of cannibalism). We recently had the “ye olde internet sit down” with Alex Automatic writer/creator Fraser Campbell and he had a whole lot to say about his newest project, The Edge Off. So then, let’s get started!

AP2HYC: Tell us a bit about yourself.

Campbell: I’m a writer from Falkirk in Scotland. I’ve written comics more or less solidly since 2015, but before that I’d written prose, plays, comedy etc. I still work part time as a comedy writer – very different stuff to my comics!

AP2HYC: What is The Edge Off all about?

Campbell: The Edge Off is about a gangster called Lee Butler who wakes up to find himself spiked with a new designer psychotropic drug and his daughter kidnapped. He has to try and figure out who has taken her and get her back all while completely unable to trust his perceptions. However, that’s just the top-line of the story. There’s loads more going on and the comic eventually has Lee on a nightmarish collision course with every terrible decision he’s ever made. We’ve had a lot of people say it reads like “Taken meets Eraserhead.”

AP2HYC: What were some of the inspirations for the story?

Campbell: Iain Laurie came up with the basic idea when we were chatting about doing something together. We’re both big fans of Jason Statham and his brand of unpretentious action movies. The kind we both grew up on but you don’t tend to see that much of these days. So he suggested I write a fairly straightforward script and then we’d break it up, add some of Iain’s unsettling art into the mix and see what we ended up with. We did that and then went back and forth a few times before we had something that reflected both of us. So the inspiration list reads something like: Twin Peaks: The Return, the films Performance  and The Long Goodbye, Naked Lunch, the comics of Charles Burns, Jeff Lemire and Daniel Clowes, Jason Statham movies and British gangster movies of the 70s and 80s like Get Carter  and The Long Good Friday.

AP2HYC: You’ve worked previously with Iain Laurie and David Cooper on Alex Automatic. How did these working relationships come about?

Campbell: I’ve known Iain for years, we met at college. Iain was my first pal who also really loved comics and we both liked David Lynch and a lot of the same movies. David Cooper and I met when I was making Sleeping Dogs. Our letterer Colin Bell (then and on The Edge Off) put me onto David and he’s been on everything I’ve done since. A total pro and really creative. Great guy to have onside.

AP2HYC: Could you describe the creative process between yourself, Iain and David?

Campbell: Iain and David worked very closely on the colouring side of things. Iain had some very specific ideas about the style and pallet and David rolled with that and I think enjoyed the collaboration. I know from experience that David can take the lead and make all the colouring decisions on a project but his main concern is always what’s best for the book and serving the vision, so he’s well up for collaborating and incorporating ideas as well. Juts one of the reasons “pro” jumps to mind when people ask me about him.

As far as how the story came about, that was more collaborative than usual for me. Usually, you write a script and the artist beavers away on it. There are some discussions but generally I write, someone else draws (all after an outline has been agreed of course). On this one, the whole idea was to kind of try to break the script and add layers to it through experimentation and mixing ideas. Iain gave me some notes but the main breaking of the story came from face to face chats while led to revisions and then when Iain finally drew the story, he added even more of his own ideas into it. In fact, he built a kind of shadow narrative into the story that might seem to be leading you away from the story and a little jarring at first – until you reach the end of the story. 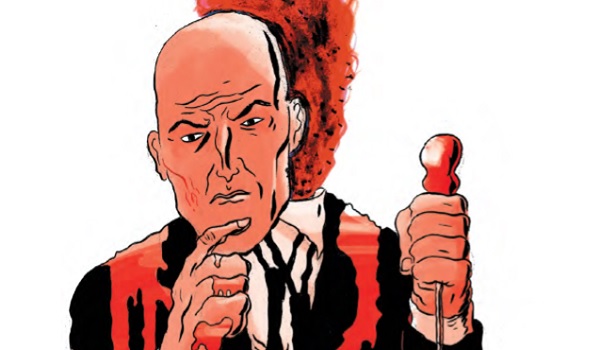 AP2HYC: You have a very distinct writing style. What are some of your favorite literary works? How about writers?

Campbell: I’d say my favourites are Last Exit to Brooklyn by Hubert Selby Jr, A Kestrel for a Knave by Barry Hines, and a novella by Terry Southern called The Magic Christian which is by far the funniest thing I’ve ever read.  I love Dashiell Hammett (The Maltese Falcon particularly) which should come as no surprise I suppose and I really like most of the Fletch novels by Gregory McDonald. The last book I read and really loved was The Amazing Adventures of Kavalier & Clay by Michael Chabon and I’m currently reading Annihilation by Jeff VanderMeer, which has been terrific so far.

I’m a comics guy really though and I’ve always loved most stuff by Alan Moore, Grant Morrison, Ann Nocenti, the Hernandez Brothers, Peter Bagge, Daniel Clowes etc. I better stop there or it will end up a stupidly big list!

AP2HYC: What has your previous experience with crowdfunding been like?

Campbell: Really positive. I’ve done two for my comic Alex Automatic and I’ve found it’s a lifesaver in terms of raising funds to make the books. Like most people making comics, I’m a working stiff with bills to pay so I wouldn’t be able to front the cost of making comics without crowdfunding.

AP2HYC: What kinds of rewards are you offering on the Kickstarter campaign?

Campbell: We’re keeping it fairly simple on this one. You can get the comic of course and we have a choice of covers. Iain does the regular cover of course and we have a variant by Garry Brown and another from Frank Quitely. Two great guys and we’re honoured to have had their support. As well as that, there are levels where you can get a commission from Iain and we’re even selling original pages from the comic. And if we’re lucky enough to get past our target, you might just get prints of the variants offered as a stretch goal…

AP2HYC: What can you tell us about the future of The Edge Off without giving too much away?

Campbell: Well it’s a one-shot so it’s unlikely we’ll visit these characters again, but Iain and I are already cooking up some other ideas, so the likelihood is we’ll be back as a team on something else fairly soon.

AP2HYC: What are some of your favorite comics and movies?

Movies – anything John Carpenter, I like French La Nouvelle Vague stuff, American 30s/40s noir, Japanese, Korean and Hong Kong action/horror stuff, all on top of what I suppose you’d say is your normal diet of US stuff. I have pretty broad tastes. Favourites change all the time so a few crackers I’ve seen lately – Take Shelter, a Mexican movie called El Incidente, Dope and a cool small budget Irish movie about kids putting a band together in the mid-80s called Sing Street.

I distinctly recall Fraser possibly, maybe, perhaps saying that Alex Automatic was a one-shot too, and we got two of those so far so I am holding out hope. Also, I am insane and optimistic and have a bad memory problem. But enough about that! Want more of The Edge Off? Take a look at the Kickstarter campaign and get your very own copy by donating!