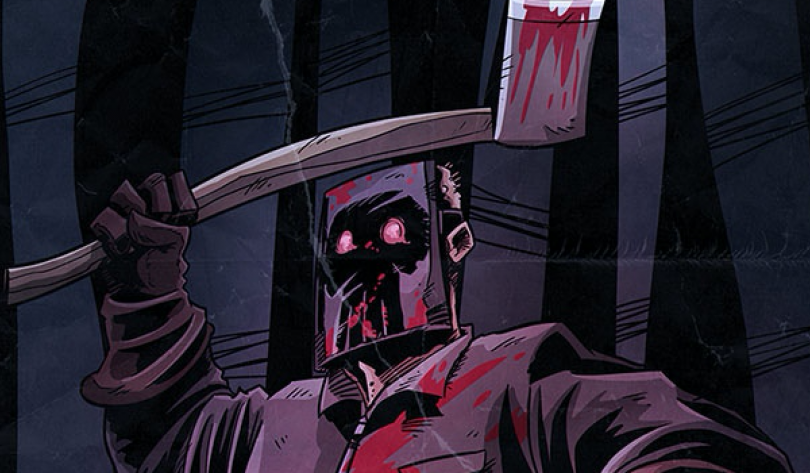 If you enjoy the balance of trashiness and creativity that can only come from a 1980s teen slasher movie, then you should certainly be interested in aXmaniac: the latest Kickstarter project from writer/illustrator Ammar Al-Chalabi. His mimicry of this specific part of the horror genre is impressive, as is his use of fun and familiar tropes. A masked killer, a hidden woodland cabin, a creepy warning, and a group of clueless teens- what more could one ask for? I had the pleasure of talking to Ammar and discussing his writing process, inspirations, and thoughts about aXmaniac in anticipation of its Kickstarter campaign’s conclusion. Here was our conversation:

AP2HYC: What do you enjoy about the horror genre, and the 1980s slasher more specifically, as a viewer and a comic creator?

Ammar Al-Chalabi: I love the horror genre for its creativity and ability to give the viewer such a raw emotion of either fear, disgust, [or] pleasure. Creativity is found in effects, creatures and camerawork. The slasher movies can be seen almost as superhero movies. You see your favorite hero (killer) killing all those wonderful whiny and annoying characters. Also, [these movies have such great characters. Freddy Krueger, of course, and my personal favourite, Jason.

As a comic creator, drawing horror is a lot of fun. I like to use a lot of hard shadows and go nuts with monster designs and gore. aXmaniac is a bit more grounded which gave [me] other challenges like drawing everyday stuff and cars!

AP2HYC: The pacing of the story feels very cinematic, as well as many of the visuals and action beats. What was your writing process like? In what ways did you emulate movies in aXmaniac?

Al-Chalabi: I kid you not when I say that as preparation for writing the script, I watched all the Friday the 13th movies to get in the mood. Even the lesser ones. I had a list of things I really wanted to include in the story. I made a list of all the characters (victims) and split the story into three acts. As you read the comic, you can see I’m very influenced by Friday the 13th and the Evil Dead movies. I wrote an outline of the story and condensed [it] into twenty-two pages which means that the pacing goes into overdrive, in a good way, I think.) [And] as I was also the artist of the comic, I could quickly imagine what would fit on a page which really helped the writing part. 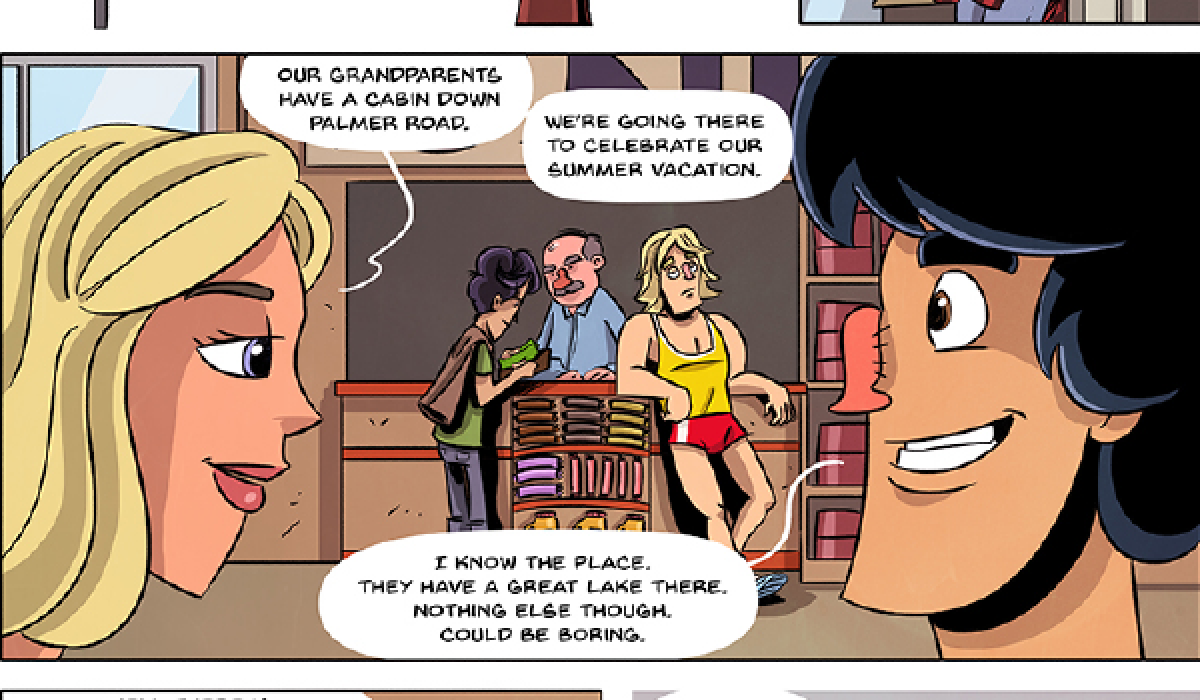 AP2HYC: On that note, I’d be foolish not to ask what your favorite horror movies are? Are there any specific ones that inspired aXmaniac? When reading I was reminded of Friday the 13th, My Bloody Valentine, and The Cabin in the Woods.

Al-Chalabi: I must say that [Friday the 13th] movie five (A New Beginning) might actually be my favourite. It doesn’t feature Jason, but it’s such a wonderfully sleazy movie; I was really surprised [when] rewatching this movie how great it is. My all time favourite horror movie is Evil Dead 2. Everything about that movie oozes creativity and you see everyone involved is passionate to make that movie. Also Bruce Campbell. I mean… come on. Other favourites: The Witch, Martyrs, Toxic Avenger, Devil’s Rejects, and Braindead (retitled as Dead Alive in America.)

AP2HYC: How does the comic book medium lend itself to telling suspenseful and scary stories?

Al-Chalabi: Horror and comics go way back. I love [using] this medium to tell scary stories. You can play around with panels to still elicit a jump scare, go wild on a weird monster design (and not worry about the special effects budget) or still keep everything in the shadows and let the reader imagine what horrors are there.

AP2HYC: I really enjoy how you lean into the clichés of your main characters; it gives the story a fun sense of humor throughout. How did you balance humor with suspense and horror in your writing?

Al-Chalabi: I’m not a very serious guy. I like to find humor in a lot of things like giving commentary during a movie and I can’t keep serious during a roleplaying session. For aXmaniac, I wanted the characters to have some humor amongst themselves, but the story is taken seriously which gives it a bigger impact. I couldn’t resist, however, to have one gag there when two characters want to drive away in the pickup truck. 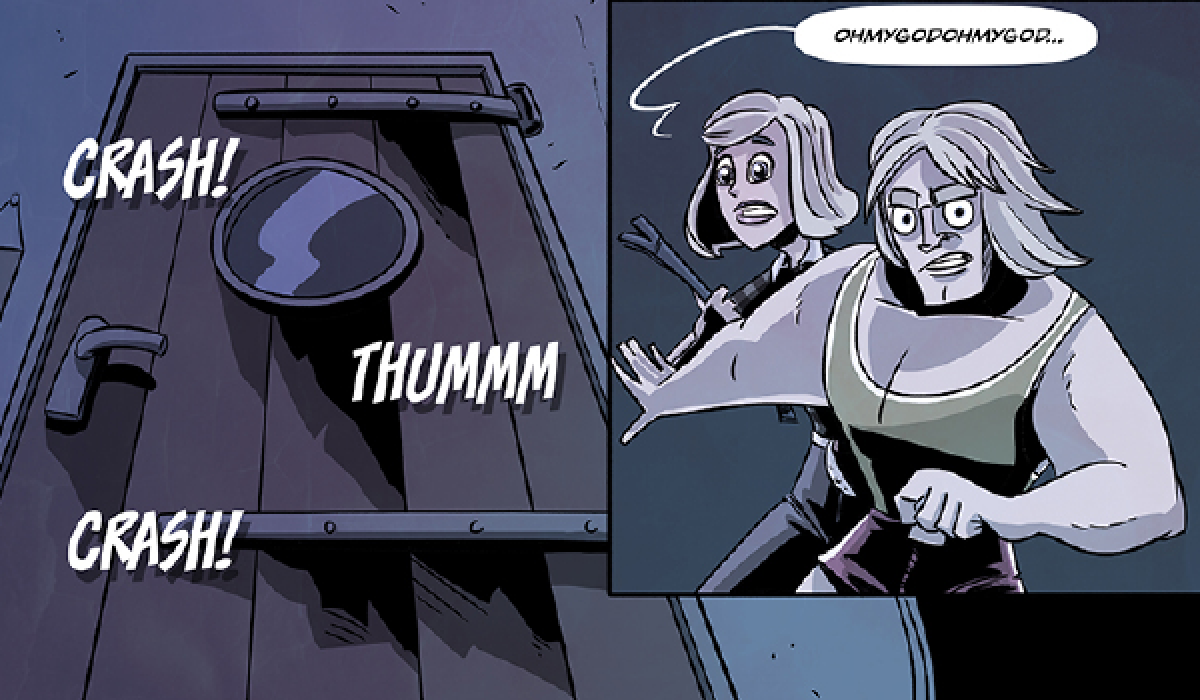 AP2HYC: How did you decide what aXmaniac’s art style would look like?

Al-Chalabi: As any artist [would], I always try to improve my work with each project I do. But during the time I have been drawing, I have developed a style in which I’m comfortable drawing. That style is seen in aXmaniac. The fun challenge was that I had to draw a lot of mundane stuff which normally I never do! Like a gas station, cars and normal, everyday settings. Might seem weird, but I usually avoid that stuff to draw more fantastical and weird stuff. Setting the story in the 1980s was also fun because I had to research a lot of stuff like clothing and hairstyle.

AP2HYC: How graphic did you think this comic was going to be when you started work on it?

Al-Chalabi: As I was set out to make an actual slasher story, I wanted to make [one] that I wanted to see, so it had to be bloody and gory. It’s fun drawing that stuff, so I wanted to go all out. There is a sex scene in the book which is [another] staple of slasher movies. As I was self-publishing the book anyway, I didn’t want to censor anything.

AP2HYC: We don’t learn much about the masked killer of this comic. Did you have a back-story for him in mind when writing? Or is it scarier when you don’t know anything about the killer?

Al-Chalabi: I do have an idea on his backstory. The reason you don’t learn much is because of the pacing and I do like to keep those things vague. The ending does have a big clue, though. 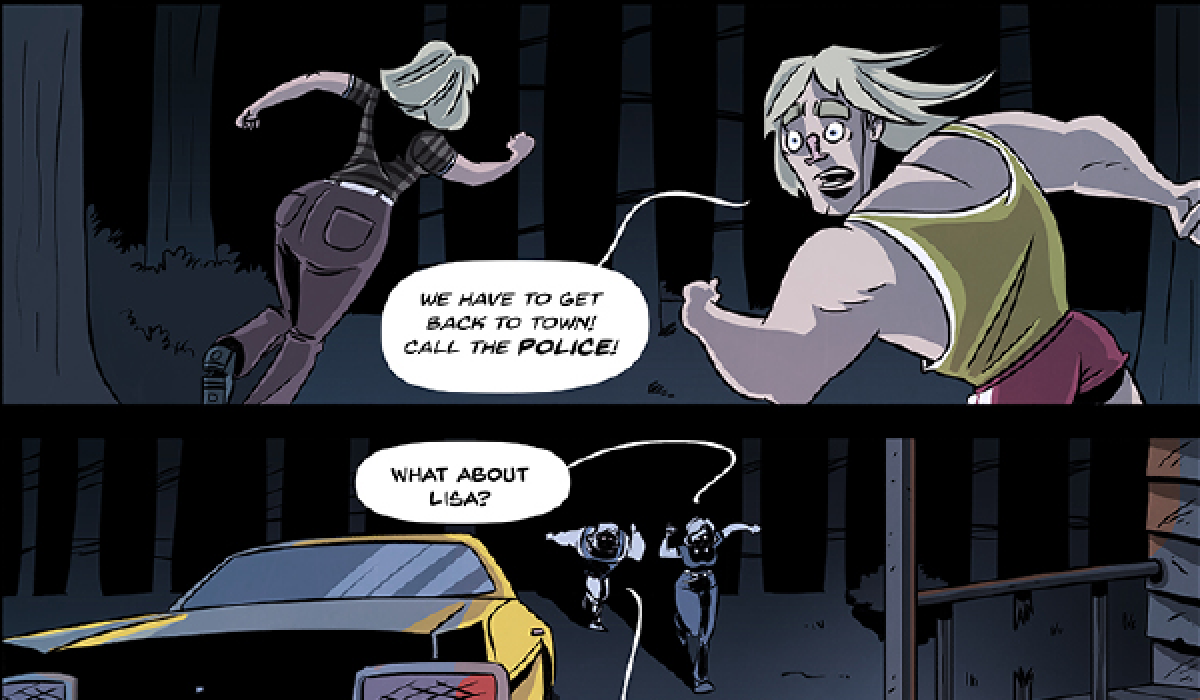 AP2HYC: Speaking of which, your ending (not to give anything away) sets up the possibility for this story to continue. Do you have any plans to make a sequel? Any hints about what one might look like?

Al-Chalabi: I did, like any good slasher will have, make it so the ending could go into a sequel. When writing my list on what I wanted to include in the script, I actually only used a small portion of that list, so there are many more ideas on what I want to do with aXmaniac. New characters for him to slaughter and the main person also has the potential for a character arc. One hint I want to give is that I have an idea for a character who might actually make things difficult for the killer!

AP2HYC: What other comic ideas can we expect from you in the future?

Al-Chalabi: I am currently drawing a pitch for a writer on which I can’t really release any information yet, but the story is pretty wild and epic! As for a new comic project, which I again will write myself, I have an idea to do a sci-fi/horror story. It won’t be aXmaniac in space, don’t worry.

Our thanks to Ammar for talking with AP2HYC; you can check out aXmaniac on its Kickstarter page here! What do you like about 80s slasher films? What are some of your favourites? Sound off in the comments or send us your thoughts on Facebook or Twitter!