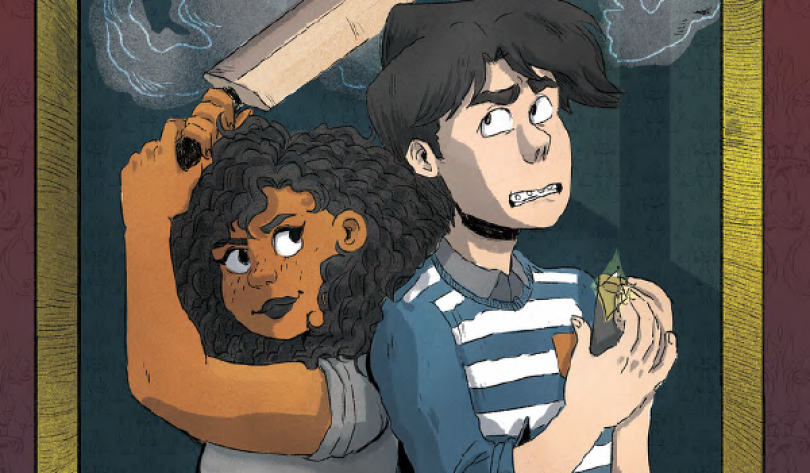 Horror stories work best when the reader cares about the wellbeing of the story’s protagonist. As a reader, I tend to connect better with characters through comedy, or at least through the moments of levity in a dramatic story. This is why I found Further by Holly Adkins, a comic she describes on its Kickstarter page as a “supernatural dramedy”, to be so engaging. Adkins takes a simple premise (two teens stuck in a haunted house) and layers her story with family drama and genuine phantasmic scares. I am glad to have gotten the chance to read Further as it enters its final weeks on Kickstarter, as well as interview Holly Adkins herself. All that said, here are my thoughts on Further:

We are introduced to this story’s haunted house through Nicholas Worthing, a soft-spoken teenager with argumentative parents and playfully combative older sister, Claire. Nicholas’ grandfather has recent passed away and left his mansion to the family. As his parents argue throughout the whole house, Nicholas spots a figure in the shadows, but is called away too soon to investigate further. 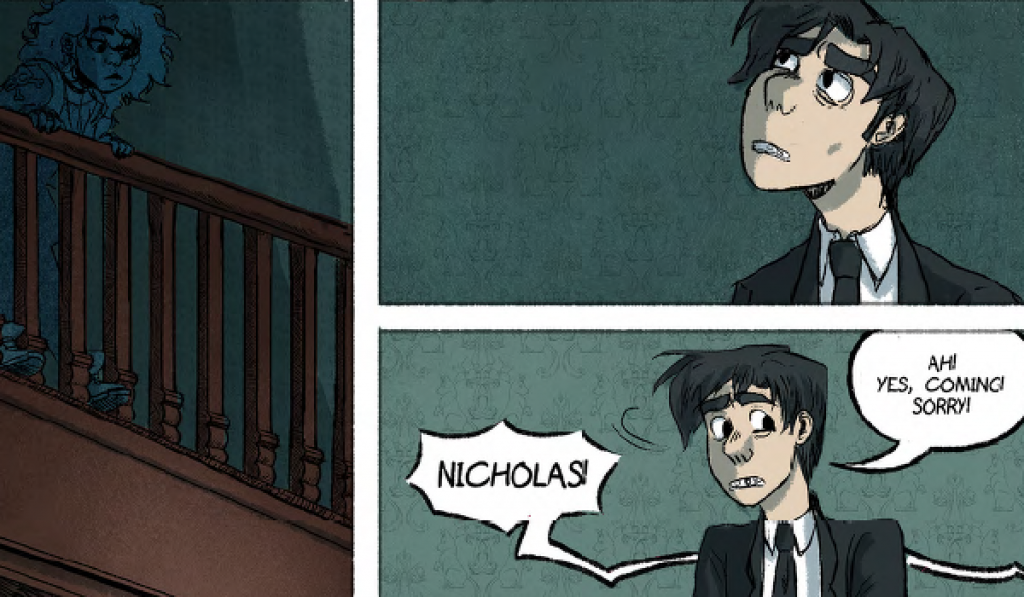 That figure is Manfred, our other protagonist, a spunky teenage girl who is squatting in the mansion. She’s got family issues of her own, but is preoccupied by what she perceives to be a supernatural presence in the house that’s keeping her from leaving. Nicholas returns to the house and the two properly meet, or rather Manfred whacks Nicholas on the head with a cricket bat. It doesn’t take long for the two to realize that the mansion is indeed possessed by the specter of one of Nicholas’ ancestors and our teenage heroes must find a way to escape the mansion alive.

Adkins wisely places the focus of her story on its most human elements. Sure, there is a little bit of a mystery as to who the identity of the ghost is, which ties nicely into a sepia-tinted flashback of Nicholas’ scandalous family history. But the reveal that there is a ghost of some kind is not dragged out and gets Nicholas and Manfred working off each other pretty quickly. Their snappy dialogue is a lot of fun and makes their more tender moments resonate genuinely. I found the two to be likable from the start, but it took some time before I started to develop a real empathy for their situations. 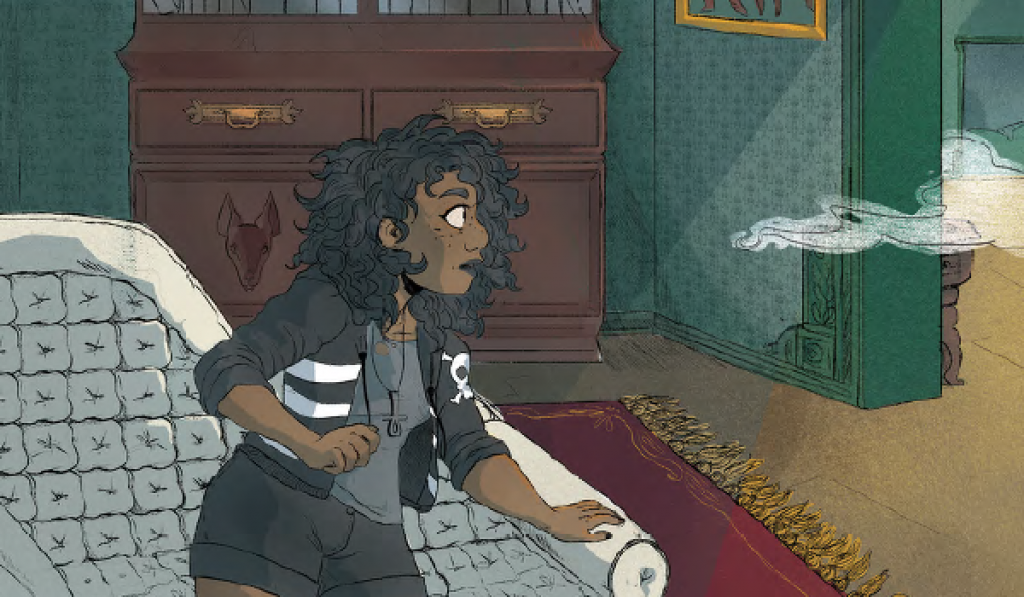 Without the family drama subtext of Further, I doubt it would be as compelling of a story as it is. Both Nicholas and Manfred have familial baggage to work out, as does the mansion’s ghost to some extent. The story’s resolution, rushed as it feels at times, is founded on solving the more difficult problem of healing a family rather than some magical or supernatural solution. That’s not to say that everyone’s problems are solved by the end, but there is enough closure to satisfy the arcs and themes of this story.

There’s a lot of great artwork and coloring in Further, also done by Holly Adkins. Her characters’ faces are very expressive, cartoonish but full of detail. I think the designs of Nicholas and Manfred contribute a lot to why I found them likable from the get-go. The coloring in the comic is sometimes bright and other times muddled, which creates a nice contrast between the outside world and the many nebulous rooms in the mansion. 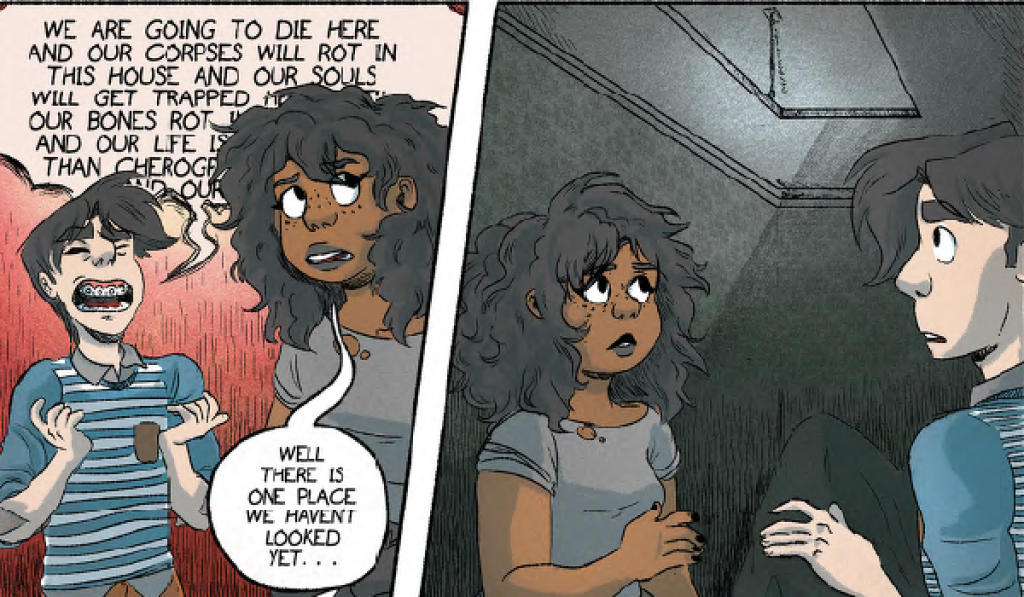 I especially like how the action is drawn when the ghost attacks Nicholas and Manfred; the background blurs as they run down the hallways and the walls start to look a little like stalactites- great stuff! My only gripe is that sometimes there are just too many speech bubbles in a panel to leave room for the artwork. But overall, Further‘s visuals tell its story very well.

If you are a fan of teenage-driven horror or mystery stories, there is plenty to like about Further. Its greatest strengths lie in Nicholas and Manfred and the rest of the story branches out from them in an entertaining way. Further is definitely worth a read and I would be curious to see what future volumes have in store.

You can check out Further‘s Kickstarter page here! Would you like to read Further? What about the comic sounds interesting to you? Sound off in the comments or send us your thoughts on Facebook or Twitter!